Children, including toddlers, are incarcerated in the Hutto Detention Center, in Taylor, Texas, a small community a few miles from Georgetown, where I teach. Not since the detention of Japanese-Americans during World War II has the U.S. Government jailed children. As it did then, these shameful policies and quasi-military actions come at a time when it is culturally acceptable to express the most xenophobic views about immigrants. Fear, hatred, and ignorance rule the day. The United States government is fully aware that in jailing children they are breaking the Human Rights Charter of the United Nations, and has cynically denied access to Dr. Jorge Bustamante, a UN Special Rapporteur for Human Rights of Immigrants.

These events have not gone unmediated, but their mediation has been structured by a system willing to reduce issues of immigration to debates by politicians over how to reform immigration policy in a way that better benefits the nation and its citizens. During these debates, Latino voices are less likely to be featured than voices from the business community, which is interested in the economic benefits of immigrant labor and who — ironically — often end up representing the pro-Latino side. An issue such as the Hutto Detention Center is essentially absent from mainstream media. Consider this: when I conducted a LexisNexis transcript search, I was able to retrieve 23 television and radio news transcripts mentioning Hutto. (In contrast, my search was interrupted when I entered “Lohan” because the search engine had found more than one thousand entries.) Of the 23 items retrieved, 20 were either from Texas media sources or Spanish-language television (Univision and Telemundo), three were from NPR, and one from Canadian television. Most of these mentions are brief, though some are poignant (for examples, listen to NPR’s All Things Considered on Feb. 9 or watch Univision’s Despierta America on Feb. 23).

Given the huge amount of television and radio news in America, the results of this brief search are evidence of a structured absence in national news organizations, which have often turned a blind eye to abuses of power involving foreigners in general and immigrants in particular in this post-9/11 America. The only national media that has addressed Hutto is CNN, where Lou Dobbs, CNN’s most xenophobic voice, has talked about the detention center in his own powerful, ethnocentric, and racist voice. The children, he claims, are better off in this prison than at home, where abject poverty is the norm. The humanitarian and civic organizations speaking on behalf of the children, he continues, are colluding with pro-immigration forces to get amnesty for those whom he calls “illegals.” 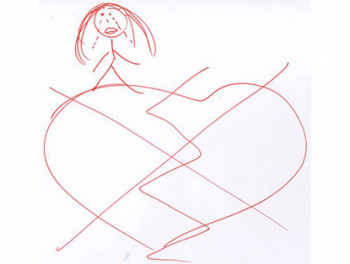 Art drawn by one of the children in the Hutto center

The overall effect of this lack of media coverage is that for most Americans, Hutto is not in the radar. Big media shape the majority’s sense of ethics and justice through the systematic repetition of nationalist and ethnocentric agendas (e.g., the honoring of soldiers and reporting of pro-military issues) and also–perhaps more poignantly–through their silences, the elements of life and reality that never make it to the evening news.

A small number of people have demonstrated their concern about the ongoing events at Hutto by using small media and employing the guerrilla tactics that are expected of activist citizens. Many of these activists assemble daily at the entrance of the prison to protest Hutto’s detention practices. Most are local. Others come on weekends, bring their cameras and banners, record, and post their footage on YouTube.com. YouTube is one of the few relatively public and general forums that allows for events like Hutto to be videotaped and distributed to a wider audience. Through its almost nihilistic way of organizing its contents, YouTube provides space for an array of different video genres, contrasting viewing traditions, and counter-publics. The range of videos depicting Hutto that can be found on YouTube includes some in which the camera is used as a simple recording device, in its rawest power, without editing or artifice, a la the Lumieres: (link)

Typically shot by people not heavily involved with activist organizations or media, these videos are filmed outside the prison and record the protests themselves and the surrounding landscape. The filmmakers, clearly, do not have access to the prison or to officials involved with the detention center. Other videos are formal, traditional mini-documentaries that use documentary conventions to produce powerful narratives that attempt to engage our emotions and reason. In Children Confined-Immigrant Detention Center at Hutto (the most viewed of the Hutto videos), the filmmakers interview a child and her mother to harness the emotional force that will make the listing of UN provisions rhetorically powerful. In two-minutes, this video sponsored by the ACLU shows the perspective of immigrants and of the UN and locates the government actions as violations of American basic ideas of justice: (link)

As powerful as Children Confined is, I found T. Don Hutto-Footage from ICE to be the most eerie of all. The video is an unusual documentary shown by Docubloggers, a video initiative sponsored by KLRU, Austin’s public television broadcasting station. According to text accompanying the video, Docubloggers requested footage from the U.S. Immigration and Customs Enforcement (ICE). ICE gave them this footage, which Docubloggers presents without editing and without sound, as it was delivered to them. Although I am sure the footage was provided by ICE as a way of addressing criticism and to show the world the quality facilities and positive living conditions of Hutto, the effect is quite the opposite. For four minutes, we are allowed to see inside Hutto silent images of clean children in prison garb while they play, eat, and color. The only faces shown are blurred or at a distance, providing just enough visual information to learn that these are brown bodies, brown families, and brown children: (link)

Docubloggers decided to show the footage as it is, in part because they believed in the power of the visuals to communicate much more than ICE intended. They were right. There is something about the video that is excessive, that which images cannot seem to contain, information that is unruly and subverts the makers’ intentions. Two instances stand out: there is a point (1:26) when the video shows a series of people walking in front of the screen on an extremely clean floor, with extremely clean green prison garbs, and with brand new shoes. We only see them from knees down, an adult followed by several small set of feet. I found these seconds of footage quite unsettling and could not immediately point to the reason. Yet I realized that these images of disembodied feet are disturbing because they remind me of prison movies set during WWII in which prisoners are meant to be rehabilitated through the rigors of fascist uber-discipline, which is shown through rhythmic images, repetition, and obsessive cleanliness, just like in the ICE video. In a similar excessive fashion, later we see the aseptic reality of a cell (2:21) that includes four items: a toilet, a sink, bunk beds, and a crib. This image, empty of life, is intended to convey “humane” living conditions to viewers; instead, it reminds us of a morgue, its emptiness becomes scary, its cleanliness absurd. The overall effect of the video is partly reached by intertextuality, either by referencing fascist images or the codes of war or criminal videos, which often blur the faces of the subjects or cover them with hoods. Because of this intertextuality, the video seems more inhumane and indicting of the actions of the Federal Government and ICE.

I must make a last point about these wonderful videos and the counter-publics they serve. As powerful as some of the videos are, they have been viewed only a few thousand times. The ICE video has been viewed 23 times at the moment of this writing. These activists are so marginal that they have no chance whatsoever to impact our nation’s mainstream culture. They are in the fringes of our video culture, barely existing. They are marginal to the nation’s political pursuits, their goals irrelevant, their voices dim. To the great majority of Americans, the children of Hutto will remain safely an absence.