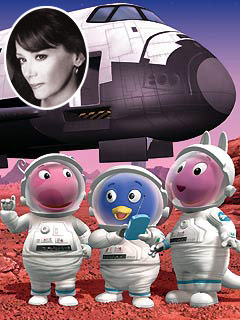 I begin this article with a text, actually with the title of a text that mentions dance, but does not talk about it. When I first came across the book about MTV by Andrew Goodwin, I was excited by the possibilities, then after reading it, disappointed. What a waste of a great title, I thought through my dancer blinders! Too be fair, Goodwin was writing at a time when Dance Studies was more fragmented and less likely to concern itself with the banality of televisual dancing. It would have never occurred to him to actually investigate the ways in which the dancing body was being deployed in frame as his overall project seemed to account for everything by focusing on capital formations and networks. Yet MTV relied heavily on a proliferation of underpaid, anonymous dancing bodies.

Displaced, breathing, dancing bodies are the foundation of contemporary block-buster 3-D CGI animation. Now with screen credits, movement models enable the virtuosity of ‘animators’ to demonstrate the capacity for rendering reality and fantasy all at once. The rendered dance double is meant to draw our eye away from the objects on screen and into a sensorial experience of human story and song. A veritable wave of distracting choreography and gestures, 3-D CGI animation portends a shift in consciousness, not just capital.

By turning our attention to the representation of figures in frame (I think we may have passed the moment where we can comfortably talk about “bodies”), tracking their location in the controlled space of the frame, but being cognizant of the wider sphere in which action is accomplished or said to be in the process of being/unbeing (here we would necessarily think about the meta-choreographies which circulate with, through and around a televisual and cinematic production) we can enter into a more robust analysis of the self-systemizing place of the projected and broadcasted in our daily lives. How are specific parameters set for our own movement through cultural concepts and performatives by the viral nature of an object moving in our visual field, whether or not it is “actual?” Working from Goodwin’s title, I would like to open a discussion about the wave of CGI animation across screens of all sizes, and the convergence of “real,” “performance,” “archival,” “action,” “computation,” and “liveness” in the manipulation of actual bodies for capturing movement (dance to be specific, though I find the gestural equally if not more mesmerizing in these vehicles) and the resultant effect of unsuccessful simulacra, meaning “copiedness” always functions as veracity; it absorbs, retains and creates surplus value which is extracted to create “brand equity” through tightly controlled and highly enhanced “real movement” of our habitual repertoire. 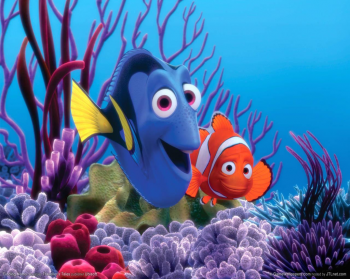 The branding of human gestural patterns and artistic bodily productions (which themselves are easily and readily “copiable”) creates the case for copyrighting sequences as intellectual property, but for whom? To be clear, to “repeat” the performance one once needed the “original” cast, but now with DVD technology, dance teams can “render” “live” versions of the “original” in frame, which is not the original after all, rather its representation; the “original” belongs to the first set of bodies, or even to the visualizing brain the choreographer.

Savion Glover as the ‘Stunt Double’ in Happy Feet

Dancing objects and human bodies pose a particular problem to the idea of “original” and “copy” real/unreal/surreal as to learn choreography, to establish parameters within which movement will happen is to necessarily copy someone else’s ideas/concepts about motion, time, space, rhythm, weight, and dare I say it, beauty and entertainment. I am suggesting that the added layer of “laying a dance track,” “being the dance stunt double,” as Savion Glover referred to his work for Happy Feet, obliterates the artistic laboring of breathing bodies as it is displaced by the “life-like” motion of the animated object. But dance dubbing (or body doubles, not a new concept at all, think Flash Dance) also confounds our interaction with movement itself: dance is assumed to be particular to the person doing it.

Future amelioration/translation or copying of the dance double’s work with the intention of repeating it as computation for an animated object/animal/stylized humanoid troubles our assumptions about the precession of the real and hence our perception, especially through tactility, respiration and vibration. Our eyes maybe looking at a screen of some sort with various mobile thingamabobbies on it, but our biofeedback would reveal an experience of dance: that quickened breathing, sympathetic heart rate, rhythmic twitching of large muscle groups, and the occasional unfounded sense of elation. We are not so inured to the copy 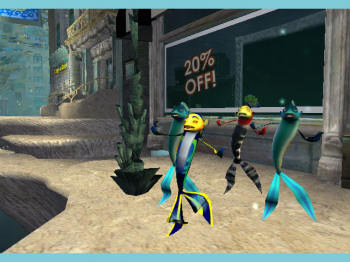 “That’s the song from Shark Tale!”

A dance performance can be copied by rehearsing it over and over, without any intention of “putting your flavor on it” as we like to say in the studio when learning a move through imitating it from someone else. Taking a representation of a dance performance that was captured on tape/film/gigabytes back into “live, real time” does not necessarily mean that the performer is not making a copy. Moreover, in this age of the Digital Millennium Act, said performers could very well be infringing on the copyright (real, imagined or explicit) of someone else. Choreography is, after all, sequencing. But whose copyright? The videographer’s, the choreographer’s, the composer’s, the dancer’s? Now add to this 21st century morass the computational thing called 3-D CGI animation and you get a copy that is an original.

This original exists not as a series of hand-drawn cells, created by a flock of artists paid a salary to “disappear” their style into the look of the company that pays them (Disney, Hanna-Barabrera, Nelvana, Nickelodean, etc.) but as an amalgamation of sketches, sculptures, photographs, drawings, and “renderings” or string upon string of code. There are pods and pods of people working on the various layers of the rendering of the film or show in order to evoke “realness” in the realm of the imaginary. Meanwhile producers carefully attend to the “real” need for the “vehicle” or “product” to be “leverageable”: i.e. interminably “copiable” to ensure specific rates of return on the “gianormous” investment required to work within such a global industry.

The preproduction of a 3-D CGI animated feature, for example, rivals the preparations for an Olympic Village in its international scope, levels of activity, players and expenditures (not to mention its displaced laborers, hidden local costs, disruptive business practices, and masked political turmoil with “art”). Factory-like, it is amusing that artistry reigns over or is the raison d’être for all the copying; that which we have assumed to be de facto unoriginality. 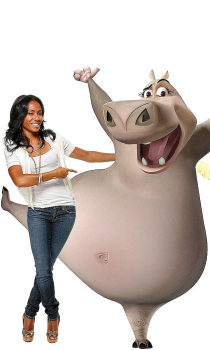 Jada Pinkett as Gloria the Hippo

Is the action on a sound stage where breathing bodies are paced through partial sets as they were in the pre-production of Monster House somewhere in California? Or is it in a New York dance studio where dancers were casted based on the choreographer’s interpretation of the script like Backyardigans? Is it in a motion capture lab in Emeryville where body measurements are taken of the voice actor’s face, and gait to capitalize on his/her as in Shrek, or full body motion captured/extracted as in Happy Feet. Is the action in the board room as tie-ins for video games, Happy Meals, and pharmaceuticals are negotiated? Is the action on a hard drive in a computer somewhere in Korea, or does it only arrive there for color correction and detail work like making “hair” look wet?

The truth is, when action is enacted, it is no longer after the slate has been marked and camera is rolling at speed. Nope. Action across digitized x, y, and z axes is non-linear, multifocal, transglobal, and beyond the biped. Action is math. Computation is labor. Motion is measured and accounted for. Yet, without a referent, most of this simply does not read as believable–even though there is nothing believable about singing or dancing penguins, kangaroos, lions, giraffes, angel fish, lemurs, sharks, ogres or donkeys. Without all of the copying and archiving of data, there is no original artwork. Without that artwork there is nothing to leverage and brand, no vehicle to support a bevy of tie-ins, product placements, synergistic partnerships and well-trained legal teams. An array of archival work deployed as live, life-like activity plied into virtual, mobile shapes, has 3-D CGI animation made it possible for a democratic departure from the meat behind in the chair? Or are we afforded an opportunity to acquire a new gesture: the morph? the radical, visceral subjectivity transformer? I’m not so sure, but I don’t have time to think about it; I’ve got to get to my Second Life…