Women are from Mars? Part 1 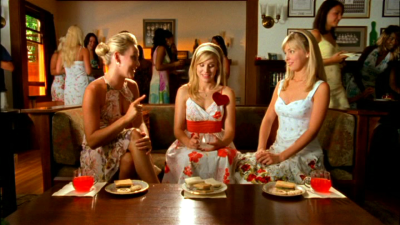 In my last Flow column, I noted how various options for viewing, and various television texts, have helped me to consider what might seem to be an absurdly huge question, one apparently far removed from the “trivialities” of commercial television: what it is to be a person. Yet however silly it might seem to link a discussion of television with a discussion of the meaning of personhood, I realized that, for me at least, thinking about both TV viewing dynamics and TV textual dynamics can raise interesting questions about the possibilities, as well as limitations, of the self in a mass-mediated society. But, of course, the self is not simply an isolated entity; it is, again, always mediated–socially and culturally articulated, even if not always (or only) televisually. In the previous column, I thus tried to point toward how certain social and cultural dynamics, and the identity categories that follow from those dynamics, were articulated in some television programs' imaginings of “selves”–how, for instance, conceptualizations and claims of raced, classed, ethnic, familial, and sexual selves operate in such programs as Oz, Dexter, Battlestar Galactica, and Ugly Betty. Those programs are amongst my all-time favorite shows, due, in no small part, to the way in which they explore exactly these issues of identity (and, as I tried to elaborate previously, the way in which they explore the construction and conventions of identity not despite but precisely through their simultaneous exploration of televisual construction and conventions). One show I didn't mention then–though it too is among my very favorites–is Veronica Mars: a program that, with its very premise of a teen “girl dick,” announces its exploration of “masculinity” and “femininity,” of the possibilities and limitations of gendered identity categories as these intersect, in the diegesis, with categories of, especially, class and generation and, in the production, with categories of narration, style, and genre.

Veronica Mars crosses many boundaries, both sexual and textual. In its focus on a young woman who solves mysteries, it has been described as a sort of Nancy Drew for the millennium–although this TV series goes beyond that (itself multiply interpreted) literary series in its categorical ambiguity. The mysteries that Veronica probes arise through both the work that she does for her father's P.I. business and the daily enigmas of high school, and then college, life. She thus operates as an investigator both privately and publicly, personally and professionally, in a familial as well as an extra-familial context. That narrative situation partially explains the generic mix of the show, which simultaneously operates as teen drama and detective program, soap opera and crime investigation, exploration of family dynamics and narration of family rebellion, melodrama and screwball comedy, cult television and mainstream programming. That mixture also suggests the play with gender and generation the program involves, which, again, emerges through not only the series' plots but its textual qualities: the aforementioned genre mix; the deployment of image and music to mark cultural style; the combination of seriousness and humor; the irony created by dialogue and gestures that almost seem designed to taunt and befuddle network censors; and the use of a mellifluous female voice-over, expressing the beautiful Veronica's inner thoughts, to frame stories that are often not so sweet or pretty.

In fact, if there is a dominant “story”–or actually, set of stories–that has defined Veronica Mars, it is the ugly story of rape. The program is structured to trace both season- (or half-season-) long mystery arcs while, at the same time, involving smaller mysteries that can usually be closed by the end of each episode–and mysteries surrounding various forms of rapes have appeared across both of those story forms. So, for example, while the first season's extended mystery focused on the death of Veronica's best friend, Lily, that central plot intersected with the question of statutory rape via the discovery of Lily's sexual relationship with an older man (who just happened to be a famous movie star and the father of first Lily's and then, later, Veronica's boyfriend) and with the possibility of Veronica herself having been raped (during an incident in which she passed out at a party, with no clear memory afterward of what had happened). After she suspects and investigates numerous potential perpetrators, viewers are led to believe that, in a sense, Veronica was raped, but not by a rapist: she was accidentally drugged (by having a bit of someone else's drink, which had been laced with GHB by one of Veronica's suspects in an attempt to get that other girl into bed) and then, in a not-quite-conscious state, had sex with her sweet ex-boyfriend who believed that she consented. If this wasn't confusing enough (a rape, meant by a potential rapist for someone else, actually committed by a man with no intention or consciousness of rape), we later find out that even this story isn't true. It turns out that, before her boyfriend entered the room where the drugged Veronica lay, another teenage boy, Cassidy–the brother of the one who put the GHB in the drink–had come in and had nonconsensual sex with Veronica, a rape he perpetrated not only because he was being egged on by his brother and friends, but, we discover in the next season, because he was acting out the rage and sexual confusion he had as a result of too being a victim of rape (when he was molested as a child by his then-Little League coach, now County Supervisor-cum-“Mayor of Neptune”). In fact, this rage and confusion also led Cassidy to orchestrate the bus crash that provided the series' second season-long mystery arc (a crash designed to stop the other Little League victims from revealing what had happened and so exposing all the boys to further scrutiny); to rape, viewers are led to presume, his own girlfriend Mac (one of Veronica's best buddies and co-investigators) when news of his heinous deeds is about to emerge; to kill his molester-now-“mayor”-of-the-town; and to try to kill Veronica (who figures all of this out) herself–all so that he can “protect” himself from further feminization after having been subjected to childhood sexual abuse. Need I add that Cassidy–both rape victim and rapist, survivor of child molestation and mass-murderer–goes by the (hated-by-him) nickname of Beaver, while his crass and sexist brother is known as Dick?

The current season of Veronica Mars is also full of rapes (so many that it might initially seem–though I don't actually think this is the case–as if the program can't possibly take rape seriously but merely uses it, over and over, as a convenient plot device). Indeed, a rape plot is what has provided the on-going mystery arc of (at least the first half) of the season. And again, this is really multiple and intersecting rape-plots-within-rape-plots: now at college (the same college where, last season in a single-episode mystery, Veronica had cleared an old friend of charges of date rape), Veronica gets drawn into a campus-wide mystery about a series of rapes in which women are drugged, sexually assaulted, and then finally left with their heads shaved. Her connection to these events is itself multiple: these rapes seem to be a continuation of the pattern revealed in the previous season's date rape story; Veronica's friend Mac's new roommate is one of the victims (in fact, is assaulted at the very moment that Veronica enters the darkened dorm room without realizing what's going on); Veronica's job at the campus newspaper leads to an assignment at a sorority house tied to the rape investigation; some of Veronica's old high-school acquaintances (including Cassidy's brother Dick, now at the same college) are suspects in the rapes; Veronica is hired by a fraternity to use her P.I. skills to try to prove their innocence; and Veronica herself almost becomes one of the rapist's victims. The over-all story (in which, as a further textual complication, direct allusions were made to the contemporaneous real-life investigation into allegations of rape against three Duke University lacrosse players) is perhaps even more convoluted than the previous season's central story–too convoluted to elaborate here–but the upshot is this: it turns out that there were actually two groups of rapists. One involved a pair of male college students (one of whom drugged the girls while the second assaulted them), but the other group–and the one positioned in the narrative arc as the big, shocking reveal (exposed first in the series but with at least as much drama as the second revelation, with the men almost as an afterthought)–consisted of a group of women, part of a feminist collective called “Lilith House,” who both staged some “fake rapes” to try to pressure the university to do more to address the problem of sexual violence on campus and, in fact, “really” sexually assaulted one of the male suspects by anally inserting a plastic egg with coded information inside of it that alluded to a girl who had a nervous breakdwon after being sexually taunted by members of the suspect fraternity and its “sister” sorority. Of course, with all of this, one might wonder here about the distinction between “real” and “fake” rape, given that–even beyond the actual revenge penetration of the frat boy by the “fake rapists”–it is never clear (to Veronica or to viewers) whether all of the women “assaulted” by the angry members of Lilith House were in on the masquerade or whether some were, in fact, drugged, left unaware of what happened (or didn't happen), and thus equally traumatized. 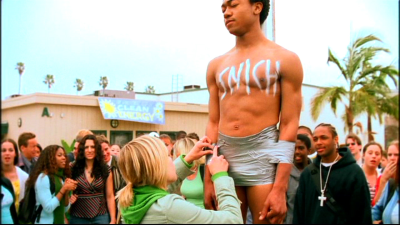 This televisual confusion about what counts as “real” vs. “not-quite-real” rape mirrors, I would argue, a confusion in our wider cultural as well legal discourses about what counts as “real rape.” Further, understandings (or misunderstandings) of rape seem intimately, if not necessarily legally, linked with understandings of gender–which is why Veronica Mars's exploration of what it means to be raped (and/or to be a rapist) is, I believe, so paradoxically interwoven with its exploration of what it means to be gendered. In part 2 of this column (to appear here March 9), I will thus attempt to think through those legal and cultural discourses in order, finally, to consider the perplexing implications of Veronica Mars's–and, in general, narrative television's–treatment of rape…with all that that implies for its construction (or deconstruction) of gender and sexuality.