When Desperate Housewives first started making a buzz I was quite skeptical. Why would I want to watch these beautiful rich women complain about petty problems? Or worse yet, act out some testosterone-driven fantasy that further serves to reify the male gaze? No thanks, I'll pass. Once a few of my female friends convinced me to actually sit down and watch an episode though, my cynical views began to budge, at least a little. While there is no denying some blatant stereotypical female portrayals, there is a refreshing depiction of femininity, and it all rests upon the shoulders of Lynette Scavo (Felicity Huffman). 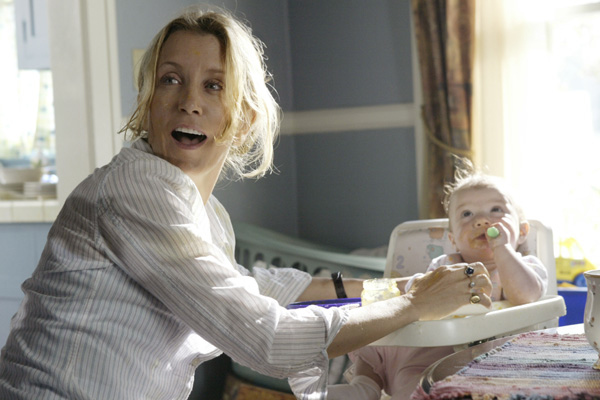 Initially Lynette is the stay-at-home mother of her four children; however, she makes it quite obvious that she is a bit resentful that she had to give up her career in order to take care of her children. Not resentful of her children, she nonetheless bemoans the fact that she was a very successful career woman whose potential may never be reached. Furthermore, she openly voices frustrations about the day-to-day burdens of motherhood. Her hair is usually tousled; her children are usually fighting, causing scenes, and embarrassing her in public. While frustrated, Lynette is not ashamed, she frequently gives other women the, “Oh, you think you could do better?” look. Lynette's character attempts to demonstrate the hardships of being a mother and wife. Her life is far from easy or perfect. She vocalizes both the joys of being with her children, but also the challenges it presents, as well as her wishes to return to the workplace. The character thus serves to complicate the binary either-or-sphere of career woman and motherhood.

Through a series of events though, Lynette does go back to work, and for awhile she is even Tom's (her husband's) boss. It is here that her feminine role begins to get watered down by patriarchal attempts of securing dominating masculinity. While Tom (Doug Savant) plays a subordinate role in the workplace, he expresses feelings of emasculation. These feelings transcend the workplace and enter the domestic sphere – a realm paradoxically considered the “woman's place” while simultaneously representing the notion “a man's home is his castle.” Tom explicitly tells Lynette that he has accepted her position of authority at work, but that he cannot then also be expected to play the subordinate role at home as well. A fight breaks out and attempts at resolution are made in the bedroom. But when Lynette wants to climb on top during sex, Tom loses it saying, “You were bracing! You were bracing with your leg! I was trying to lay on top of you and you were bracing yourself against the mattress so you don't have to get on your back!” A resolution is not made. 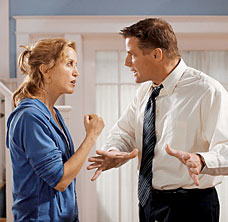 The next morning Tom and Lynette are in the elevator together heading to work; clearly they are both still upset. Tom stops the elevator and tells Lynette that they were not finished from the night before. He tells her that to save their marriage he needs to feel in control. He begins making an aggressive (though not forceful) sexual advance at Lynette. She at first resists, but is then seen passionately submitting to his amorous advances, and they presumably have sex in the elevator. Not only does Lynette succumb to Tom's dominating advances, but she does so while wearing a suit in her workplace elevator. And so Tom does not merely regain domination in his marriage through sex, but he does so in the public work sphere, thus attempting to secure his dominate role in both their marriage and the work environment.

However, as the series progresses Tom unfairly loses his job and takes on the role of stay-at-home dad, while Lynette becomes the ultimate breadwinner for the family. Having spent time in both roles, Lynette can appreciate the challenges and responsibilities of both positions. Tom however again explicitly vocalizes feelings of emasculation. By arguing that his role is to provide for the family, he is creating a hierarchy in which a career is more valuable to a man's identity than taking care of the children. The underlying assumption then, would imply that a “woman's role” at home is not as important or valuable as a “man's role” (career). If the role of breadwinner and child-rearer were seen as equal, then Tom could appreciate his role without feeling emasculated (since both roles would be valued as equally necessary, important, and challenging). 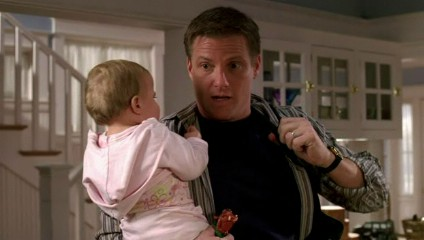 So while it is considered acceptable for Lynette to play roles in both the domestic and workplace sphere, Tom expresses feelings of emasculation when he can only serve in the domestic sphere. This further reifies the false notion of binary spheres in so much that a woman can work, but she is also expected to take care of the home. Furthermore, by demeaning the domestic sphere to banal and unfulfilling, Tom undermines women who do choose to forego the workplace in order to be fulltime stay-at-home moms. So surfaces the notion that full-time motherhood might be okay for a woman, but it is not acceptable for a man. Does this imply that women are satisfied to serve in a private realm void of public meritocracy? What assumptions does this reveal towards women who choose to stay at home? Feminism is about choice, yet, clearly there still exist bias about women who choose fulltime motherhood over a career. The unfair hierarchy and false mutual exclusivity of the spheres are demonstrated by Tom's desire to re-enter the workforce. One has to wonder, to what extent is “woman's role” defined for the sole purpose of securing man's dominate role?

But returning to Lynette's role as modern feminist, I want to point out her attempts at further complicating the balance of power. She supports Tom's desire to go back to work and she encourages him to follow his true dreams. When Tom reveals his dream of owning a pizza restaurant Lynette is very skeptical and downtrodden to say the least. Tom continually hides complications from Lynette because he does not want her berating him for making mistakes. When she confronts him about such difficulties he tries to make her feel guilty for not supporting him. However, Lynette serves to problematize Tom's one-sided argument. She points out that he is gambling with their lifesavings. She will encourage and support him, but she reminds him that she has a say in what he is doing. Since the accumulation of their lifesavings truly has been a joint effort, she asserts her voice as an equal authority in how he gets to spend the money. And so again, Lynette makes an attempt to find balance in the complicated roles of supporting wife and simultaneous career woman, in effort to blur the lines between these false dichotomies.

While Desperate Housewives may not be completely groundbreaking or revolutionary, and while other characters definitely depict stereotypical views of women, Lynette's role does at least begin to complicate the boundaries between a career and motherhood, while bringing to the surface some underlying and contradictory assumptions about both feminism and masculinity.