Pink Slips for Booth Babes?: No Way! Re-train and Re-skill!

by: Nina B. Huntemann / Suffolk University 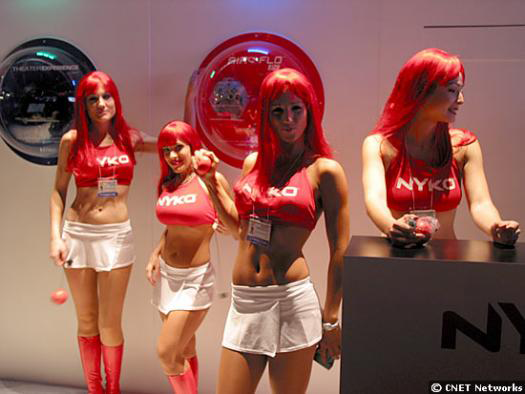 This July the Entertainment Software Association will hold its 13th annual Electronic Entertainment Expo. It promises to be a very different meeting than the previous decade of notorious E3 events. Last year the ESA announced they were scaling back E3 in order to create a “more personal dialogue” between the industry and media.[1] News outlets and game blogs reported that major industry players, namely Nintendo, Sony, EA and Microsoft, threatened to pullout of the massive trade show if the ESA did not downsize. With over 60,000 attendees, the industry’s largest U.S. promotional event of the year had tripled in size since its inception. Millions of dollars were poured into displays that filled 870,000 square feet at the LA Convention Center with pounding music, light shows, and 8-foot tall video screens. E3 was a week-long event of schmoozing, partying and deal-making. Now, apparently, it is time for the event (and the industry) to grow up.

It is probable that during this new “scaled back” version of E3, independent companies will face difficulty acquiring precious space and time to promote new projects. Supporters of the change speculate that for companies who do secure slots, the time and money spent at E3 will be more useful, as “intimate meetings” and tighter budgets prevail. For the shrinking number of independent publishers and producers, a smaller E3 will create yet another obstacle to surviving in an industry moving closer and closer to oligopoly. Furthermore, as the ESA has already promised “stricter admissions policies” and an invitation-only guest list, far fewer freelance journalists, online magazine editors and bloggers will obtain press passes. The official E3 website already requires a user name and password for entry. These issues are important and necessitate debate and discussion as the ESA solidifies plans for July. But I am interested in the plight of another industry underdog that deserves attention and concern: The booth babe.

Yes, the booth babe. Hardcore gamers and game critics know and love and hate her well. She is the scantily-clad contract model hired by Sony to don skin-tight leather pants to promote Dark Kingdoms; she is the silver mini-skirted Ubi Soft Rainbow Six dancer who will happily pose with you for a photo. (In which Rainbow Six series is there dancing? I must have missed that one.) Despite pre-conference warnings to exhibitors that any company representative displaying “conduct that is sexually explicit and/or sexually provocative, including but not limited to nudity, partial nudity and bathing suit bottoms” would result in a fine of $5,000, booth babes were out in force at E3 2006.[2] But now it appears the threat is real. Booth babes may become a thing of the glorious and glamorous past, not because the ladies look like they got lost on their way to Venice Beach, but because economics rules the day. Booth babes and all the promotional extravaganza that accompanies them just costs too much. 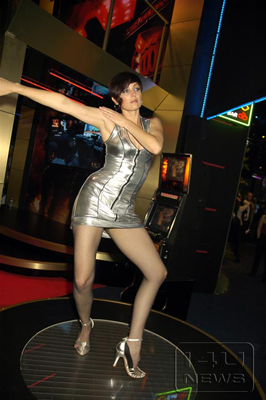 As the expo cuts back, what will happen to the hundreds of talented women employed every year to entice E3 attendees with free stuff and free gawks? (I am assuming that making E3 more “intimate” will not involve disco lights and stocking cash registers with extra singles.) Is the booth babe getting the pink slip (and not a lacey one from Victoria’s Secret)? I fear for her future employment, but I propose a solution.

Don’t hand those lovely ladies walking papers. Invite them to trade in their torso-pinching corsets for business casual attire. Tell booth babes to sheath those fake swords once and for all, and take up a Wacom pen instead! Sell the cages for desks with chairs. (I hear your feet really hurt after a day of standing at the expo.) I’m talking about redefining the role for women in the industry. Higher skilled and higher paying jobs!

I admit the phenomenon of the booth babe provides an easy target for the feminist media critic. We yank her out of her dancing cage to illustrate and berate the industry for its treatment of women; that is to say, as decorative marketing props. But what are the facts? It is true that more women were employed at video game companies in 2006 than in 1996. However, according to a survey conducted by the International Game Developers Association, only 11.5% of the video game workforce is female. Furthermore, most of these women work in marketing, public relations and support staff positions.[3] Save for a few high-profile figures, women are still largely absent from the production studios and executive offices of the gaming industry.

The problem of women and games has vexed the industry since its inception. So much ink has been spilled and conference panels endured on the question of why more women don’t play games? What would a game for girls look like? How do you market to the female gamer? Does the female gamer even exist? In every column and at every panel someone always suggests – and they are right – that one approach to these problems is to employ more women in the industry, particularly in design positions. More women in the industry is not only good for workplace diversity, it increases the perspectives available during brainstorming discussions and thus is a boon for creativity. This is not to suggest that men can’t possibly envision and create a game women will enjoy (e.g. Katamari Damacy, Sims and World of Warcraft). However, as the success of chic-lit and chic-flics proves, female ideas seem to attract female audiences.

Am I suggesting anything new? Not really. Game companies have heard it all before: Recruit, recruit, recruit; network with computer science and art departments at universities nearby; mentor the women on staff; create working conditions that support families. This last point received enormous Internet traffic in 2004 when the spouse of an EA programmer posted an anonymous complaint on LiveJournal about the long, uncompensated hours her husband was expected to work. It sparked a much-need discussion about quality of life in the software development workplace which, if taken seriously by game companies, would improve the retention of all valuable employees, men and women.

My point is not that booth babes should change the color of their parachutes and give up modeling for modding. Working in promotions is a perfectly reasonable and respectable career path. My point is, what employment choices does the industry encourage women to explore by parading the booth babe? We know girls turn away from playing video games because they get the message games are toys for boys. We know girls turn away from careers in computers because they feel they will be more successful in jobs that fall into traditional gender roles. More young girls would aspire to work in video games if they could imagine themselves as more than exhibition props. Video game companies should support that imagination in anyway feasible. 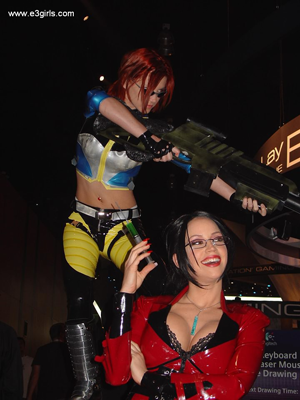 The ESA frequently responds to public outcry about violence and sex in games by claiming that the industry is maturing. The average gamer is nearly 30, they say. As it continues to grow-up, put the lavishness of E3 aside and get down to “serious business”, it would do the industry well to raise the profile of women. The ESA could generate much-need public and political goodwill. Imagine announcing alongside presidential hopeful Senator Hillary Rodham-Clinton, who frequently points her finger at video games for corrupting children, a long-term effort to educate girls for high-technology jobs. Now that’s an industry photo-op I’d love to see.