Getting Girls to Play: The Broadening of the Video Game Market 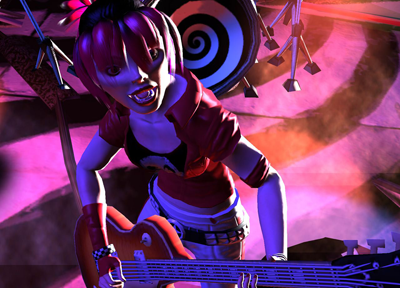 I'm standing on stage holding my guitar, it is a red Gibson and I have bright red hair and I'm wearing a punk ensemble. I'm playing the Foo Fighters' “Monkey Wrench” and I ROCK! All the while I am standing in my living room using a guitar game controller that is allowing me to live out a fantasy of my rocker chick potential. In reality I would have no hope in hell of getting past one cord of anything on a guitar, but through the miracle of gaming I can inhabit many characters and be the rocker chick of my dreams.

Since the videogame industry began, the ideal gamer has been both young and male in the eyes of the game creators. Various strategies and systems have been utilized by the game industry to maintain this gamer ideal. A system has been in place that creates barriers to the inclusion of women and girls from being seen as “typical” game players by the industry. This has led to a small number of women and girls playing immersive video games.

Women and girls who play video games are often forced through gameplay to see the world as heterosexual men perceive it. As a result of the number of barriers a woman or girl must transgress to play video games, it is not surprising that many women only play games that they are introduced to through a male acquaintance, such as a brother, boyfriend, or male friend. These men and boys act as a bridge for women and girls into the video game space.

While many video games and video game companies work to create boundaries that keep women away from video games, there have recently been some games that have created openings for the traditional “non-game players” to experience video games in a way that feels immersive and fits their lifestyle. Guitar Hero, along with SingStar, Karaoke Revolution, and other games that use an alternative controller, have opened the doors of video gaming beyond the group of core gamers. These games have brought additional players to the video game arena through curiosity, and they have maintained these players through highly immersive game play. One of the games that has been the most successful at reaching a much larger video game audience, while retaining the “typical gamer” as seen by the game industry, is Red Octane's Guitar Hero. 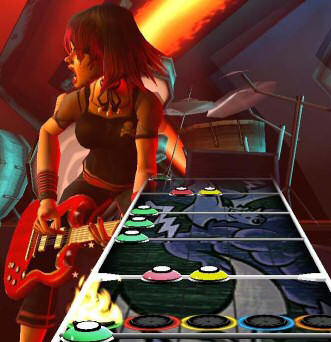 This innovative game was originally released for play on the Sony PlayStation 2. The game comes with a guitar controller that plugs into the console. The controller for the game is a plastic guitar that is about 3/4 the size of a regular guitar with buttons as the frets, a lever for the strings, and a whammy bar. Initially the game did not get the same kind of marketing exposure that video games typically use to tap into their existing base, and this may be one of the reasons that the game was able to explode beyond the range of the typical game player. There were fewer barricades erected on the marketing side of things to keep players from the game. The use of an alternate controller also allowed for the game to have a wider audience. There was no automatic familiarity with the controller that put the non-game player at a disadvantage. When a group of people got together to play the game they all had to adjust to the new system. The non-gamers were not left out of the loop in the way they would be if the game used a traditional controller that a regular game player would have a high comfort level with.

Guitar Hero has been played in video game development studios as a team building exercise, by member of the PMS Clan[1] on road trips and in a sorority house at the University of Texas. The wide audience reached by Guitar Hero speaks to the potential for all games when barriers to game play are broken down instead of reinforced.

Guitar Hero breaks down the traditional barriers to video games not only through the innovative guitar controller, but also through the game play. Two of the six playable characters in Guitar Hero are female and three of the nine playable characters are female in Guitar Hero II. The song selection includes a wide variety of genres that has a broad audience appeal. Because games are so immersive for a game to be enjoyable the player needs to connect with the character. The availability of strong female characters allows girls and women to become completely immersed into the game reality. The music is also of high importance because it is through the music and the character that the game is truly enjoyed. By including a collection of songs that includes Joan Jett, Franz Ferdinand, Black Sabbath and the Donnas this varied, yet accessible song selection allows more players to feel comfortable with the game. 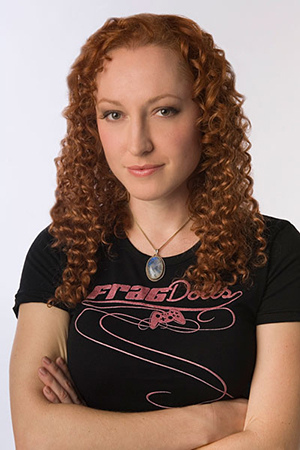 Morgan Romine of the Frag Dolls

I interviewed three of the most visible professional female game players to discuss what they found impressive about Guitar Hero.

Morgan Romine, Frag Dolls[2], Team Captain
Why do you play Guitar Hero?
Guitar Hero is both a skill game and a way to become deeply involved with the music. It's given me a whole new appreciation for the skill involved in playing that music even though you're not really playing the music.

How does it challenge you?
Guitar Hero has challenged me in two significant ways. I have been playing the piano since I was 4 years old and reached a concert performance level while in high school. My biggest issue in playing was that I would sometimes over-think my performance and psych myself out which would poorly impact my technique. Guitar Hero has helped me to practice not over-thinking a technical piece of music and just trust my fingers to rote muscle memory. I've also gotten more comfortable performing in front of groups which was always part of my problem.

How do you position your body when playing Guitar Hero?
When I'm first learning a song I like to practice sitting down. When I'm practicing for a competition I do so standing up because you have to be standing up to fully rock out. I hold my guitar higher on my body than most people.

Amber Dalton, Co-Founder and Leader of the PMS Clan
What do you think about the music selections? Does it influence the way you play the game?

The music was great, which I was actually surprised about. GH has so many classic hits that we KNOW and can really jam out.

Do you find the game immersive?
Absolutely. You can spend hours in it, because of the game play and music together, so time can fly playing (as it does with any good game).

Who is your favorite character? Why?
I like the girl, Judy, because I always love to play as a female character when I get a chance!

Do you know how to play a regular guitar? If so, what do you play?
Nope, I wish I did though! Guitar Hero lets me at least IMAGINE I play, that helps make it a great game!

Jennie Lees, PMS Clan UK
Why do you play Guitar Hero?
To have a bit of fun, I often play with my friends to show off or to try and get them into it.

What about the game do you most enjoy?
Probably the way it makes you feel like you're really playing the music.

I like Judy Nails 'cause she matches my style :)

What do you think about the music selection? Does it influence the way you play the game?
Yes, the music selection really helps me get into the spirit of things, capturing the “rock” atmosphere of the game. It also helps that I know a lot of the songs. I don't know as many on the Guitar Hero 2 setlist and haven't played it as much as a result. 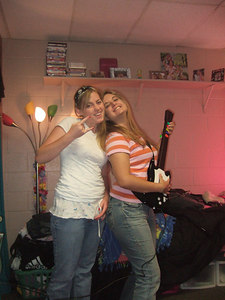 Guitar Hero's innovative game controller, the broad and easily accessible music selection, and the option to play a strong female character all help this game to move beyond the core gamer audience to reach those not usually served by the video game industry. These female game players highlight the importance of a female character as well as highly innovative game play options for the game to be immersive and accessible. Through innovation, as shown by Guitar Hero, more “non-game players” can see video games as accessible, fun and a way to explore other realities.

Notes
[1] PMS is a diverse population of women gamers from all over the world, playing multiple platforms. We are hard-core gamers, sisters, mothers, wives, and daughters and vary from ages, ethicality and social backgrounds. Only one common factor can be found among us and that is our addiction to gaming!

[2] The Frag Dolls are a team of gamers recruited by Ubisoft to represent their video games and promote the presence of women in the gaming industry.