In my previous article for Flow, I began to look at the changes in television by going back to a traditional definition of the word. The motivation was that dictionary definitions do not change frequently. Therefore, we can use them as a baseline, in this case, to see how television is changing.

In this article, I’ll continue that process by examining the second definition of the three given which states, “2a. An electronic apparatus that receives electromagnetic waves and displays the reconverted images on a screen. b. The integrated audible and visible content of the electromagnetic waves received and converted by such an apparatus.”(1)

This definition is focused on the apparatus of television, or in other words, the television set. It reveals the assumption that television is transmitted, received and then watched.

However, today, many people watch television programming via the Internet (e.g. nbc.com, youtube.com, bittorrent) or buy entire seasons on DVD, as Rachel Ryan noted in a comment to the previous article. These media can be viewed with an ever-growing array of technologies (for example, computers, portable DVD players, Tivo, the Sony PSP and video iPods.) The ability to digitally store and playback television programming has completely changed the way we relate to the medium. Many devices, especially the handhelds, are also MP3 players, photography displays, gaming systems, and even dictionaries, which further change our relationship to television sets.

A telling analogy exists between television and software, that sheds light on what it means when television is no longer situated in a fixed time or place. Software has been often described as experiencing a shift in focus from increasing efficiency to increasing control for their users.

Take for instance word processing. With the spread of the personal computer gaining momentum in the 1980s, word processors were touted as saving time and paper. Revisions could be made quickly, as you did not need to rewrite or retype entire pages to correct one word. That is, they made us more efficient. However, as the access to computation continued in relation to Moore's Law, we saw more sophisticated word processing applications with ever expanding functions. Soon, the focus moved towards control.

Writers now, can control spelling, layouts and fonts in ways that were not possible in early applications. Crucially, these features do not necessarily save time. How many hours have I spent (over-)tweaking the formatting or wording of articles, websites or presentations?

Once television sets were inexpensive enough to be in the vast majority of homes in the US and internationally, the television set was the most efficient way to broadcast information to people. An entire nation and world watched everything from the moon landing to the last episode of MASH. 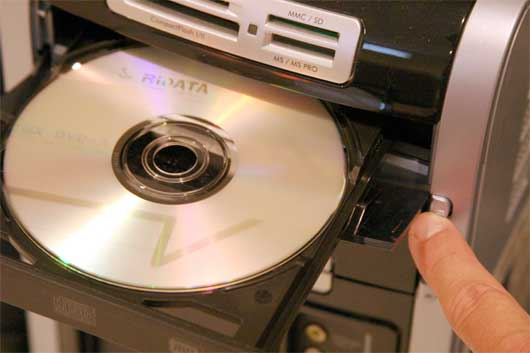 Today, the idea of “appointment television” seems increasingly quaint. We no longer watch television in living rooms, whose furniture has been arranged to maximize viewing. With these new “sets” (or ways) to watch television programming, we are seeing a similar shift from efficiency to control.

VCRs showed a glimpse of the shift towards control. However, with the improved interface and storage capacity of Tivo and other DVR systems, the process of recording television and obtaining control became much easier and evolved our relationship to the medium. With the coinciding decreasing costs of digital video cameras and production tools, not only do we have a greater selection of sets, but an explosion of television content as well.

What will the future hold? Attempts to predict the future are generally foolish. However, as people become more reliant on mobile television viewing devices, an increasing amount of content will also be created with smaller screens and short viewing times in mind. As television programming becomes more niche, we will continue to see these effects of Chris Anderson's Longtail (2) on television production. This change is, less of a prediction, and more of an observation of current trends.

A decline of traditional “high production value, 22 episode seasons, network television shows” is already in decline. They are expensive to make and most fail. However, they won't go away in entirely. Good shows with compelling narratives and acting will survive, producers of these programs are simply facing more competition from the likes of cheap-to-make reality television shows and even cheaper DYI uploads to YouTube.

Formats and content designed specifically for (very) small screens and short viewing periods will continue to increase in popularity. However, an increasing amount of television will be designed to be watched on a variety of screens sizes.

Just as we saw with word processing software, more control attimes comes at the sacrifice of efficiency. With many more channels and content, some messages can get out faster, however many more will get lost in the voluminous quantities of television content produced. Search engines, tagging and other filtering techniques will help counter this outcome, however they have limitations.

In the end, the television set has as much influence on the meaning of television as the content does. Television programming and sets continue to evolve from a medium and technology of efficiency to control. This evolution reveals that television is no longer strictly tied to a specific “apparatus” which receives and displays electromagnetic signals. The apparatus is, of course, still crucial and so we must adapt our understanding and definitions to these changes.