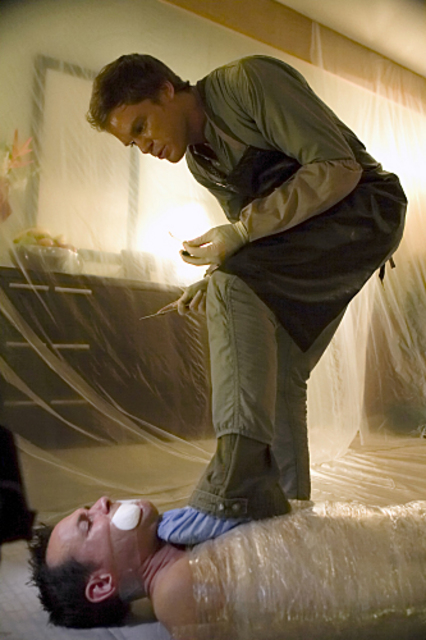 One of the latest offerings from SHOWTIME (other recent fare has included Weeds, Sleeper Cell, The L Word, Dead Like Me, and Brotherhood) is Dexter, starring Michael C. Hall of Six Feet Under fame. Dexter draws on the critical acclaim of Hall's David Fisher, the uptight queer undertaker, in its construction of Dexter Morgan, the sociopathic forensic expert who moonlights as a serial killer. The characters are very different, but Hall brings a certain subtlety to them both, a sense of being and acting in the world while at the same time standing outside it and looking in. Both series offer up critical insights about the neo-liberal governance of persons and spaces in post-9/11 America (despite the fact that season one of Six Feet Under aired in June 2001) where uncontrollable violence and accidental death are mundane parts of everyday life.

In a totally different way, Dexter is thematically linked to a dynasty of stellar Neilson ratings epitomized in the network (CBS) CSI series. Like CSI, Dexter is fascinated with blood and bodies, with truth and justice, with power. But unlike CSI, Dexter isn't earnest. That is, the crucible at the centre of CSI as an ideological system is an often humourless belief in science as a route to a truth that will set us free; hence the ubiquitous mantra to follow the evidence, that the evidence doesn't lie, and so on. Dexter, by contrast, problematizes the binary structures of good and evil and truth and lies that we are pushed to accept by CSI. And it does this, at least in part, by refusing to look at these things earnestly.

There are a myriad ways to juxtapose CSI and Dexter (perhaps most notably in the way the latter's use of voice-over narration by the central character allows us into a space of personal and critical self-reflection that is absent in the former) that are impossible to touch upon in 1000 words. But at the centre of the lack of earnestness identified above is the character of Dexter himself, who basically is Dexter. As a child, he was adopted into a “normal” Miami family. His father, a police officer, quickly noted Dexter's affectlessness and propensity for violence and schooled him in the art of pretense, which would allow him to blend in with the “normals.” At the same time, Father taught Dex to channel his violent tendencies in the right direction, that is, towards those violent individuals who prey on the weak and slip through the cracks in the criminal justice system. Because being a blood-spatter expert on the Miami police force is his day job, Dexter can use the system and its regimes of truth and knowledge to find and torture criminals who he believes have escaped formal justice; he then chops them up and drops them into the ocean, retaining as a prize only a drop of their blood which he keeps between two glass slides in a box hidden in his air conditioner. 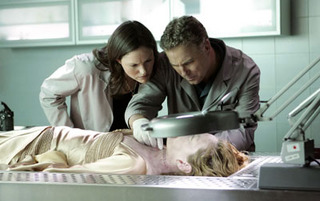 The key variables here aren't new: vigilante justice, a broken system, and an anti-hero (hello Buffy!). What is perhaps different is a production context in which CSI (and its brethren: Cold Case, Criminal Minds, Law & Order: SVU) dominates the broadcast television landscape. In the first week of November, Nielson put both CSI and CSI: NY in the top ten Broadcast TV program (CSI: Miami was number 11). To date, the series occupy the third, sixth and eighth spots in rank of top network series for the 2006-2007 season. The earnest adherence of a doctrine of scientific truth that will land us on an unambiguous terra firma is a key to CSI's success. While its characters may be replete with quirks and foibles, questions of good and evil, right and wrong, guilt and innocence tend to be treated in the same way as the evidence that's always there and waiting to move quickly and efficiently through the system. This earnestness may be related to the traditional network (as opposed to netlet or cable) space in which CSI is produced, and to the way networks have traditionally catered (that is, earnestly) to broad audiences rather than avid fans.

Which is not to say that Dexter does away with these discourses or that it offers us a vision of a new system in a new world order. But by taking us into the spaces that we already know from CSI (not only Miami, but also forensic/evidentiary spaces that include the insides of bodies), while at the same time refusing to treat them earnestly, Dexter points us towards a critique of the system that is almost entirely obscured in CSI.

The ironic attitude Dexter holds vis-a-vis these questions is nowhere as clearly articulated than in the series' opening sequence. With a lighthearted soundtrack (that always causes me to think of the ear-cutting scene from Reservoir Dogs), we witness Dexter going about his morning rituals. They are mundane in the extreme, but shot in such a way (abstract, vaguely cubist, and often in severe close-up) that they appear to represent grotesque, almost pornographic violence. A piece of ham might be a human tongue sliced and thrown into a hot frying pan; a drop of hot sauce might be blood; a cotton tee-shirt pulled over the head suggests strangulation… and throughout, the lighthearted music. The effect is to draw our attention to the way we read violence (even if it isn't really there) and in so doing to force us into a distanced position from which we can critically attend to the violence. To return to Reservoir Dogs for a moment: why were people so shocked by the scene mentioned previously? Not because they were being exposed to an unheard of level of violence, but because the violence was so proximate that it forced them back into a position from which they really had consider it.

Dexter has the potential to do this as well. By casting earnestness aside and opening the door to irony, the series highlights its own implication (and hence ours, its viewers) in the production and maintenance of particular neo-liberal power structures. It creates a not entirely comfortable (but not entirely unpleasant either) space for us to step back into, from whose vantage point we might consider what justice and truth are, why the spectacles of violence and death are pleasurable, how the system works, and the place each of us is reserved within it.