What is “shown” on television is always the result of a complex process of selection: what items to report, what to leave out, what to replay, and what to downplay. Television sports production also involves a wide range of processes of visual and narrative representation–choices regarding the images, language, camera positioning, and story line required to translate “what happened” into a program that makes “good television.”
— Richard Gruneau (“Making Spectacle” 134-35)

To suggest that ESPN's “Full Circle” programming is the very definition of media convergence (and transtextuality) is an understatement. Four times this year ESPN has utilized its expansive (Disney-owned) family of networks to show a single sporting event in as many as nine different media manifestations. These include “traditional” network telecasts on ESPN (and ESPN-HD), ESPN2 (and ESPN2-HD), ESPNU and ESPN International, in addition to broadband coverage on ESPN.com, ESPN360 (subscription online service) and Mobile ESPN (phone service by AT&T). What's so interesting about a sports network exploiting sports-crazed media junkies? Sure, it's compelling that ESPN is using its network “family” to reap advertising money by selling ad space to the same event nine times, but what is really innovative is the broadcast implications of the multi-screen interface on ESPN2 (and ESPN2-HD).

While ESPN (and ESPN-HD) offer a “traditional game telecast,” ESPN2's coverage is something akin to the multi-image mosaics of films such as The Boston Strangler (1968) or Time Code (2000). Certainly, prime-time TV is no stranger to multi-screening, but typically 24's uses of such techniques serve as exposition or transitional strategies. ESPN's deployment of the multi-screening visuals is interesting not only for its narrative uses, but for its subject matter: sporting events have a particular fascination of and dependency upon visual style and editing practices. 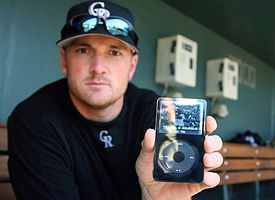 In the modern media era, sports utilize film and video in ways that few other industries can claim. Players and coaches regularly have “film sessions” to study opposing teams' defensive strategies and schemes. Golfers watch high-speed video of their swings to work out minute flaws, and baseball players use video iPods to study opposing pitchers' tendencies. Many university (and virtually all professional) sports programs house editing suites with teams of editors whose sole purpose is to edit highlight packages for game “prep” by the assistant coaches. In this way, coaches study film (actually video) with the same passion that we media scholars analyze texts but for different goals. Coaches look for small quirks of opposing squads to exploit them and thus gain an edge.

Games are often “decided” by “instant replay” (the use of video to review and revise the on-field rulings of the officials) that undermines the inherent liveness and spontaneity of the sporting events. After all, many fans will proclaim that the very unpredictability of sporting events–who will win and how–is their largest and most important reason for watching. Therefore, ESPN decided to up the ante of what is considering lingua franca in sports broadcasting–coverage.

Like DVD commentaries and multiple-angle options, ESPN decided to not preference any one vantage point in a single broadcast to show the action on the field. Instead, ESPN's Full Circle on ESPN2 shows what it feels like to attend the event itself but still have a multitude of information about the game and its participants. The mosaic view mimics a producer's bank of separate video feeds to switch between and provides dedicated camera coverage of coaches on the sidelines, quarterbacks on the field and off, a skycam view1 (integrated from the video game franchises of EA Sports), fans in the stands and in-studio commentary. This last feature is particularly problematic for aural clarity. The in-studio commentators are in a lower quadrant of the screen and much like in Time Code, their vocal tracks are overlapped with the in-game commentary. The resulting cacophony of sound and visual spectacle is novel, but very authentically mimics the confusion and excitement of a live sporting event. 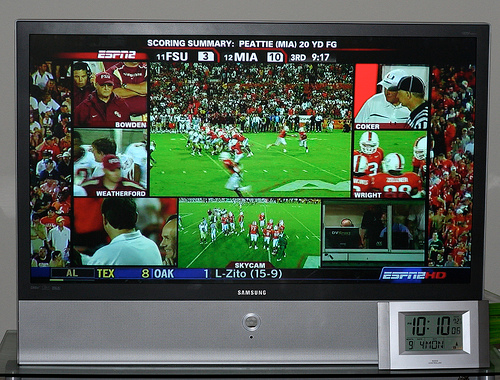 FSU vs. Miami on Full Circle

While certain TV techniques like letterboxing can corral a viewer's gaze and represent authorial control by the producers, ESPN's decision to splinter the screen into a jigsaw puzzle requires even more manipulation to guide viewers' eyeballs. Why would a network willingly deploy a technique that almost certainly will confuse and frustrate its viewers? ESPN observes the guiding rule of sports broadcasting for fans: the only thing better than coverage of “their” game is more coverage. ESPN's goal for the Full Circle programming package is deluge. Sports fans and commentators often interact via the vocabulary of statistics (or “stats”): How many fouls does a player have? How many seconds remaining on the shot/play clock? What is the passing completion percentage for a certain quarterback? ESPN distributes all of this information throughout the mosaic telecast either at the top center of the frame (see above image) or alternately with “bleeds” via a vertical stats box down the left edge of the frame. This last technique exploits and emphasizes the wider (16:9) HD proportions, further fetishizing the technological prowess of both the network and the viewer.

What then are we to make of ESPN's decision de deluge? Is this the direction that sports broadcasting will go to compete with new media environments such as video games and/or DIY consumer-created texts that appear on YouTube? This is unlikely in the immediate future, but ESPN has established that the “full screen” approach to covering sports is not indispensable. Will this mosaic view become a norm of TV visual style? We are all accustomed to viewing (and listening to) multiple talking heads vivified in split-screen fashion on any number of news programs, so one can't say that ESPN is revolutionizing TV watching with Full Circle. ESPN's decision to exploit and fully utilize its empirical powers to sell one telecast in as many formats as possible and therefore to secure as much ad revenue as possible is probably the most compelling industrial aspect of this innovative move. As ESPN continues to experiment with its broad-reaching network of media outlets, we can be certain that more unique ways to cover sporting events will follow, and for us sports fans that is a good thing.

Note
1 For ESPN's Full Circle coverage of basketball games, this camera is replaced with a dedicated camera “above the rim.”