Awaken the Giant Within — He’s Hungry!:
Anthony Robbins and the Enterprising Self 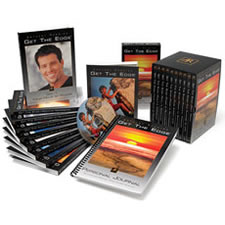 Anyone with a television knows Anthony Robbins. His infomercial Get the Edge goes out at 6 am every day on Living channel in the UK. In this enlightening little programme, the modest and self-effacing guru explains to Leeza Gibbons the many ways he can help us all realise our true potential. After twenty minutes and the tearful testimony of the Tony-transformed we are encouraged to invest a couple of hundred pounds in a series of CDs designed to daily change our lives. What I’d like to do here is to make a few connections between Robbins and the model of the enterprising self that has come to dominate life over the last twenty years. I want to suggest that the human potential movement of which Robbins is a prominent representative is perfectly aligned with the project of governmental self-formation to shape our conduct in ways that match those of dominant authorities and agencies. This tendency is now finding expression in burgeoning forms of reality programming that highlight the flexible/mouldable nature of our selves.

Get the Edge is only one expression of the Robbins philosophy. Through CDs, seminars, health resorts and consultancy work the Master Motivator exhorts us all to “be all we can be.” A forceful and charismatic performer – “the MTV equivalent of going to Church” – said to be earning $80 million a year, Robbins insists that he is merely “awakening” what is already within us – a giant of potential that just needs direction.

The tools that Robbins uses are based on Neuro-Linguistic Programming, a psychological approach that suggests we can change our attitude to life by altering our language and changing our “state.” By reframing experiences we can see defeat as an opportunity and quite literally take charge of our selves. Success comes from modelling one’s self on a successful other like Quincy Jones or, say, George Bush. Space prevents an enquiry into the tactics Robbins uses to get his message across (readers are urged to explore the frightening debate between true believers and the disenchanted on robbins.org), but I think it may be worth exploring the substance of what he is promoting.

As other writers have noted the human potential movement has expanded in tandem with the decline of traditional American industry (Salerno 2005, Kaminer 1993). As the gap between rich and poor increases and union power fades, Robbins and others in the movement exploit the new insecurities. Television is perhaps the premium site for parading (and offering cures for) this therapeutically-inclined mentality. Suitably for NLP it is language where the new mind-set finds its most forceful expression. People are now to re-program themselves as empowered and entrepreneurial selves. A British example of such linguistic dexterity comes to mind: over the last twenty years the “unemployed” have ceased to exist: in their place is the “job-seeker.” This positive re-branding is intended to help the individual feel better about themselves and to look upon the steady erosion of all forms of benefit as the price one has to pay for a chance to thrive in a dynamic enterprise culture. 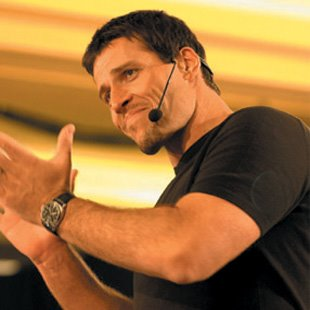 Just as Robbins suggests the new entrepreneurial self is to be engaged in their own self-government. They should see themselves as human capital to be developed and invested. In turn various legitimating agencies seek to “govern through regulated choices made by discrete and autonomous actors in the context of their particular commitments to families and communities” (Foucault 1980).

As Miller (1993) and McGee (2005) have pointed out, the human potential movement represents a kind of psychological coercion where the pressure is on to auto-invent. It all seems so simple: indeed change is presented as merely common sense. The infomercial presents the tools and people seem transformed – why can’t we do it? As these authors explain this sort of approach “over-emphasizes individual agency at the expense of the necessary reliance on or assistance of a network of others.” Quite simply it may not always be easy to “cure” the nation as the motivators suggest. At a time of rising insecurity, the self-management tools of NLP are technologies of consumption which may end up exacerbating our anxieties. The number of people who return to courses such as Robbins suggests that the tools cannot always do the job. Some critics have even suggested that they are only intended to work so far – to go all the way an individual is encouraged to “invest” another $5,000 in a higher level program. And in the language of the movement this has a high chance of success because making such a purchase (“You have to commit”) will elicit the right state to be receptive to more messages about self-belief.

The human potential movement is perfectly tailored to television as it busily makes ever more expansive efforts to both reveal and change people’s lives. In television you can see the change. (Never mind about the after-effects). What happens on screen is all that matters in a culture that wants quick solutions as it zaps from station to station. In formats ranging from Extreme Makeover: Home Edition to Family Forensics, we are now encouraged to look to TV to both record and transform ourselves. Individuals are persuaded to open themselves up to television, to expose the inner workings of their lives so that their selves may be moulded back to the norm. Get the Edge is only the purest expression of this tendency. By focusing on the redemptive power of faith in one very rich man we can learn (by investing time, money and faith) about our own potential, “change state” and then…follow.

Some have speculated that Robbins may soon enter politics. His enterprising message will make him attractive to both Democrats and Republicans. The triumph of enterprise culture legitimates a culture that celebrates a flexible self in place of outmoded collectivities. Now we are all “projects-in-progress,” or the “CEO of me.”

So how is it viewing Get the Edge makes me think of Seinfeld and being “Master of My Domain?” 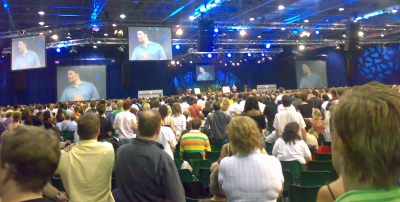 Miller, T. 1993. The Well-Tempered Self. Baltimore: John Hopkins UP.