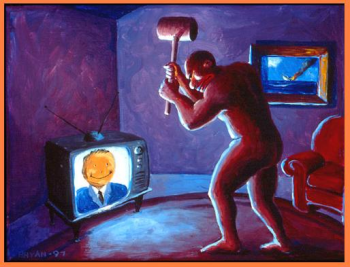 One day at University of California, Berkeley, as I rushed into a 250-student lecture class, I was hailed by a student in the front row. Normally, I liked to wait until after the class for questions, but she looked so very concerned, so I asked what was up. Pen and paper in hand, ready and eager to take notes on my answer, she asked me, completely seriously, “Professor, why do you hate Celine Dion?”

Media and cultural studies have done a fine job of offering numerous explanations of why one might love Celine Dion, but we’ve hardly started to explore the meanings and workings of textual dislike, disgust, and distemper. Hence, if Random Person A sends flowers to a soap character or owns a Boba Fett outfit, my office bookcases are full of smart work ready to analyze what it means, but the bookcases are less capable if Random Person A sends hate mail to a program, campaigns for its end, or simply grabs the remote and changes the channel anytime it is on.

This is all the more bizarre because anti-fandom (by which I mean active dislike of a text, personality, or genre) is as common a response to any given media entity as is fandom. For all those who think Bono is Christ, there are those who think him the Anti-Christ; for all those who watch The OC eagerly, there are those proud of their avoidance of the show; and so on. Yet anti-fandom has not received its due attention as a viable viewing/consuming position. Indeed, if media effects and “couch potato” discourse is still so common, this is in part because we (the field, and society) seem much more keen to discuss people who turn on the media (and how, why, etc.), rather than those who turn it off (and how, why, etc.). Ron Lembo (2000) writes of our need to study “the turn to television,” but what of “the turn (away) from television.”

As the study of the anti-fan’s apparent foil, fan studies might offer us the initial way forward. After all, it has taught us two key lessons that we might apply to textual hatred or dislike:

(1) fans can’t always be trusted to know fully why they like what they like (see, for instance, the superb psychology-meets-critical theory approach of Matt Hills (2002), Cornel Sandvoss (2005), and Lee Harrington and Denise Bielby (1996)); and

(2) fans experience a different text than do others: they read more of it, add texts and paratexts to the mix, and have a greater familiarity, hence changing the very shape and meaning of the text (see Henry Jenkins (1992), Will Brooker (2002), or the above).

So it would seem to be the case with anti-fans.

Texts exist on various levels: a rational-realistic level (do I believe this? does it make sense?), a moral level (do I approve of its morals?), a political level (how do I react to its politics?), and an aesthetic level (is it artful or beautiful?), to name some key ones. However, just as many of us tend to “defend” our favorite texts on levels that truthfully don’t mean much to us, so too do we tend to “damn” texts that we dislike for reasons not totally related to why we dislike them. The rational-realistic level is a particular unlucky bystander in both situations, as a viewer’s statements regarding a show’s “realism” or lack thereof quite often serve as little more than an indicator of fandom or anti-fandom on a deeper, more complex level (because, to a degree, any show can be called “realistic” or “unrealistic” and defended as such). So, if you hate the show, calling it unrealistic sounds reasonable, but may mean very little, just as if you love it, and call it realistic, this may mean very little.

Matt Hills (2002) also notes that fan cultures develop defensive “mantras,” used to explain why a show is good or not. These mantras may or may not accurately reflect a fan’s feelings, but they do the job of deflecting questions or ridicule. So too do anti-fans develop mantras. If we come armed with theoretically rich accounts of fan psychology and sociality, we are better equipped to see through such mantras, or to contextualize them. But it is time that, Bourdieu and others in hand, we attempt to more systematically understand anti-fandom and its own mantras. 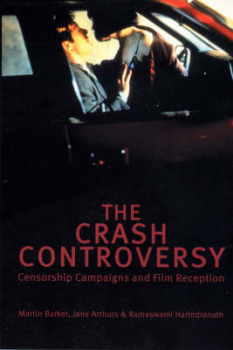 Some pioneering work here has been conducted by Martin Barker, Jane Arthurs, and Ramaswami Harindranath on their book The Crash Controversy (2001), which explores viewer reactions to David Cronenberg’s Crash. Barker et al. observe how most of the leaders of the drive to have the film removed from English cinemas had not actually watched the film. Thus, on the other end of the textual spectrum from fans, who often avidly consume huge portions of the text and its accompanying paratexts, are often anti-fans, who may only have read reviews, heard a friend’s one-sentence description (“a film about people who get turned on by car crashes”), or been told by a trusted opinion leader that it’s bad. In cases such as this, not having seen a text by no means precludes one from “decoding” it, even to the point of caring so deeply about one’s decoding that one will write letters to politicians or march in the streets about it.

Moreover, as Barker et al. also show, such anti-fan accounts can have such a strong impact on the text that they impose a set and limited frame through which all viewers will watch. In the case of Cronenberg’s Crash, public outrage over its “filthy” and “dangerous” messages made it hard for most of Barker et al.’s audiences to view “innocently” without such a frame (even if they actively rejected it). As I have written in previous columns, spoilers, previews, intro sequences, and the like all have remarkable powers to frame our viewings, and so too does anti-fan commentary.

Thus, by not looking at anti-fandom, we may have been missing many of the meanings, powers, effects, and intricate patterns of identification that audiences have been constructing. People can often define themselves just as strongly by what they dislike as by what they like; indeed, some viewers care much more about their televisual dislikes than likes. Hence the path to understanding how texts are situated in the daily lives of citizens and consumers would require spending considerable time in the land of anti-fandom, and we may have been missing a lot of what the media does and means by concentrating so intently on fans or casual viewers. (Which is not to criticize fan studies as much as it is to call for anti-fan studies).

As an extension of anti-fan studies, we might come to better terms with our own pedagogical and research practice. After all, much of television studies’ output could be seen as an elaborate and sophisticated declaration of dislike. Whole books have been written on why such-and-such a program is bad, and whole careers have progressed because of long resumes full of examinations of the ills of television. Pedagogically too, many television studies academics see it as their sworn task to teach students away from the many nasties on television, and to open their eyes to all that is wrong with the box. Certainly, I too spend parts of my writing and teaching doing as much. Anti-fandom and academia are intimately connected, in other words.

But as I have been arguing, a proper study of anti-fandom would often reveal some deep-seated reasons for hate or dislike beyond what anti-fans themselves intuit. So let me ask provocatively, why don’t researchers/teachers who actively dislike a program state this outright, in the same spirit of honesty with which many fan researchers “confess” their fandom? Not only could this allow readers the chance to explore possible alternate reasons for the anti-fandom than the ones provided (though I suspect such devious readings take place confidentially with fellow colleagues/students), but it might also let us know the researcher’s/teacher’s relative distance from the text.

So why do I dislike Celine Dion? I usually say it’s because she perpetuates and sells a culture of junk romance that belittles women in the guise of “honoring” their feelings. But mantra aside, and truth be told, there are many singers who do this, so why dislike her in particular? A more honest answer would probably state that my anti-fandom works as a marker of national identity. Canadians always seem American to everyone else, or when they have remnants of a British private school in their accent, as do I, they sound like Brits to many Americans. But other than at hockey games, how often does one get to declare Canadianness? With Celine Dion, quite often, as she was (less so now, though) quite often in the news or on the radio. A violent reaction to and rejection of her allows a statement of Canadianness, since it usually begins, “Las Vegas can have her: she’s our gift to America” (emphasis added). Conveniently, too, by disavowing a famous Canadian, rather than proudly claiming her, I can craft a statement of seemingly non-nationalistic nationalism (often Canadians’ preferred form of nationalism). A proper psychologist might even dig further to find a Western Canadian’s aggression and resentment of French Canadian political power in there at some level. Thus, as bad as her music is, and as putrid as her lyrics are, Celine Dion is largely an image and an icon for me, one that a good ethnographer would hopefully coax out of me.

I bring up the specter of our own personal dislikes not to campaign for researchers to fill their work with apologia and self-psychoanalysis, but rather to point out that our practice is informed by more than just erstwhile academic research agendas. Some have questioned the degree of scholarship in fan-scholars, but so too could we play this game with questioning the degree of scholarship in anti-fan-scholar. We are all fans of some things, and we are all anti-fans of other things. As such, there is important work to be done in exploring the anti-fan side of media consumption. This work will illuminate our practice of research and pedagogy as a bonus, but the ultimate prize lies in filling in a vast area of the general map of media consumption.