“Israeli Idol” Goes to War: The Globalization of Television Studies

I was just returning from a summer vacation in Israel, where I conducted some research on Kohav Nolad (literally–“A Star is Born”), the Israeli version of the global “Idol” competition format, when all hell broke loose on the Israeli-Lebanese border. I have been staring with frustration and astonishment at my television screen ever since, bringing to new records of refinement my most handy skill as a post-Zionist leftist Israeli–the ability to be afraid and ashamed simultaneously.

Luckily, I soon found a way to channel my frustration into research, when with the break of war, Kohav Nolad quickly transformed itself before my researching eyes. As one critic succinctly put it “Since the war began… Kohav Nolad took upon itself the role of national Morale Officer” (Kristal; my translation). This did not only make it the single Israeli entertainment show to survive the switch to wartime broadcast, but also allowed it to maintain its place at the top of the rating charts throughout the war. This is an achievement that cannot be taken for granted in the context of Israeli television.

This case study raises interesting questions about the way global TV formats get adapted and reworked within specific national contexts, and illustrates the dialectic relationship between local and global trends that characterizes television as a postmodern medium. More particularly, it will help me illustrate the intense negotiations of commercialism vs. nationalism that dominate public discourses surrounding television in most national locations where it was first developed as a non-commercial medium.

For example, as this study demonstrates, even in today’s commercially dominated Israeli television industry, commercialism cannot be taken for granted as the dominant framework for television production and reception. To remain commercially viable, Israeli television must, on the one hand, incorporate global elements such as cutting-edge reality formats, while on the other hand it has to rely on the established national address of the older, “statist,” public-service, broadcast model, that still shapes Israeli’s expectations and demands from the medium of television. This exemplifies the speciousness of the accepted binary opposition between commercial and public forms of TV broadcast in the country. In fact, the two modes of address are dialectically intertwined in Israeli commercial TV.

Similarly, around the globe, relatively new commercial broadcasting bodies struggle to negotiate their profit-driven orientation with public perceptions of the national role of television. Given that, in this case, the negotiation centers around one of the most successful global genres, the reality competition show, Kohav Nolad serves as a valuable instance in the debate on the global flow of TV formats. It also suggests that exploration of these issues from a non-U.S/U.K perspective might complement, if not challenge, theory and research in the discipline of television studies, in which American, and perhaps less often, British television, alternately reign as exnominated norm.1

The transformation of Kohav Nolad begun during the first week of the Israeli-Lebanese war, and reflected the production’s resourcefulness in adapting the global format to the demands of Israeli TV culture. Throughout these first weeks, the show kept transforming–its format (e.g. canceling the competition portion in the first week), its song repertoire (i.e. selecting from a canon of quiet, patriotic Hebrew songs), and its location (e.g. airing from a northern border-town, and later on performing live in the southern resort village of Nitzanim, occupied by citizens who fled northern Israel).

The show was also flexible in its incorporation of “stories from the field.” Relevant strategies included holding song competitions between firefighters and police-officers, interviewing citizens sitting in bomb shelters, and, ultimately, helping arrange the wedding of a young couple from northern Kiryat Shmona, whose wedding location was under attack. This particular instance quickly turned into a hetero-normative nationalistic spectacle, as the correspondent reporting from the scene repeatedly declared the wedding a “triumph over Hezbollah.”

From the perspective of an international TV genre theory, these examples begin to illustrate the reasons behind the global success of local adaptations of reality formats and explain why these local versions often do better than imports of the original shows. This has everything to do with reality formats’ open-ended, hybrid, and flexible form. Even more importantly however, it relies on the genre’s famous (if not notorious) “claim to the real” (Corner; Holmes and Jermyn; Murray and Oullette).

When faced with a national war crisis, Kohav Nolad creatively transformed itself by seamlessly borrowing from a whole range of reality forms–from the news broadcast, to reality-soaps–all the time utilizing the genre’s capability to tap actuality. These transformations, combined with the show’s characteristic “liveness,” reinforced the production’s central legitimizing premise of “being with the people,” “strengthening,” “supporting,” and “encouraging” the nation in time of war. Thus, where older, more conventional, “closed” formats of television entertainment may prove too remote or escapist to survive the switch to wartime broadcast in Israel, the open-ended reality format that allows such creative manipulations proved more resilient and adaptable.

This does not mean everyone accepted the integrity of Kohav Nolad‘s new national role. This was especially clear in the public discussions by journalist, critics and audience members debating the topic in on-line talk-backs. Here again, the tension between commercialism and nationalism dominated the discourse. This tension is reflected well in a TV review by highbrow Ha’aretz‘s TV critic, Ehud Asheri. Asheri viewed the decision to adapt Kohav Nolad‘s format to the circumstances as “legitimate marketing gimmick.” The problem for him is the “megalomaniac ‘statist’ pretense” involved in “presenting this… as a national mission, including the accompanying kitsch spectacles” (my translation from his article published on 07/16/2006).2 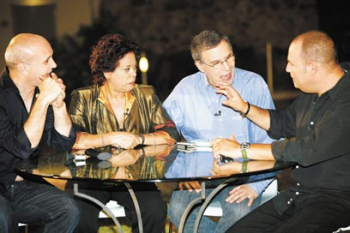 Asheri’s readers debated passionately whether this “is indeed an example of ‘fake statist’ broadcast,” which presents “false national concern, in favor of ratings and high profits from commercials.” Or an example illustrating that commercial television “can and should produce… responsible national role models, in days such as these and in other days.”

A different take on the issue is presented by Ynet TV critic, Meirav Kristal, who criticized Kohav Nolad‘s “multiple format transformations.” Kristal seems to reject the compulsion of Israeli commercial TV to conform to nationalistic address in times of crisis. To her the pressure of national responsibility reduced the contestants from potential stars to “a chorus-line, collectively chanting patriotic songs.”

Kristal wraps up by asking “why don’t the Israeli fans demand back the show that the war confiscated?” “Israel is a weird nation” she concludes in her answer–“when we are offered peace we are startled and divide, and when we are surprisingly presented with a war we fall into silence and unite.” This points to an aspect I hope to address in future research, namely the way Kohav Nolad was able to participate, through its glocalized reality format, in the hegemonic process amassing national consensus around a war that is already called under question by growing sectors in Israeli society.

This discussion will have to account for the way the dialectic of globalized television, as roughly portrayed so far, gets articulated within particular historical national junctions. As the Israeli case begins to illustrate television’s particular position and cultural function in contemporary societies makes it a very helpful point of departure for the exploration of such ideological questions.

This demonstrates the immense potential global TV studies hold as a theoretical and methodological framework for the study, in particular national contexts, of local manifestations of such global trends as postnationalism and postmodernism. On the flip side of the argument, the Kohav Nolad case study can teach us how valuable the nuanced exploration of varied national television systems–looking at elements of production, text, and reception–can be in advancing TV study’s objectives and enhancing our understanding of TV as the multifaceted global phenomenon it really is.

Notes
1 The historical dominance of American and British television and the distinguished body of work they triggered led to the establishment of these specific national manifestations of the medium as exnominated norm within TV studies. Suffice it to point to the numerous publications dealing with “TV history,” “TV Genre,” “TV and sound,” “TV audiences,” “feminist TV studies,” etc., that rely exclusively on American and/or British examples. Granted, some of these key works do acknowledge their reliance on specific American or British national contexts, but the discipline as a whole is far from providing equal place for consideration of non-U.S/U.K (and not necessarily “International” or “Global”–labels that can fit American or British media as well from some perspectives…) research on television. This is unfortunate as the global nature of today’s communication systems requires international collaboration if we are to advance our understanding of the multifaceted medium of TV. Lately we have seen a couple of enterprises aimed to rectify this glaring omission. Let me shamelessly mention here the upcoming Flow conference which will host two relevant roundtables: one on the globalization and one on the de-westernization of TV studies. Another source of activity is the Non U.S/U.K television studies action-committee, co-chaired by Tim Havens and myself. This action committee sets out to create a space for more globalized scholarship within our discipline, and is currently organizing a workshop and two panels for the next SCMS conference in Chicago.
2 All subsequent quotes are also my translations from the original texts in Hebrew.

1. Rather than stars, the presence of war makes the contestants look like a chorus line, collectively chanting patriotic songs. Image capture from Kohav Nolad, July 20th, 2006, courtesy of author.

2. The audience cheering Kohav Nolad top 10 contestants at the holyday village in Nitzanim, where the show relocated to appear live, before hundreds of thousands of residents, who escaped northern Israel. Image capture from Kohav Nolad, July 20th, 2006, courtesy of author.

External Links
1. Kohav Nolad 4 offical website with pictures, videos, and forums; in Hebrew.
2. Jewish Agency for Israel; an article about the Jewish agency arranging special auditions for Jews all over the world to participate in the show this season; in English.