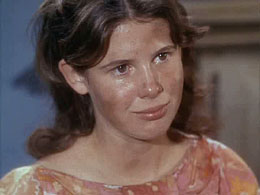 Two notable media references in one week to a word invented for a 1966 episode of Star Trek constitutes an uncanny coincidence worthy of an article on television’s persistence or resilience. But instead, the multiple references to “grups,” (first in a passing line on Gilmore Girls in which April sends Luke off with the other chaperoning “grups”–a more precise reference in which “grown-ups” becomes grups–and then in a New York Magazine feature profiling grups as “an ascendant breed of grown-up who has redefined adulthood”) led me to think about this second version of grups on television.

The New York Magazine article recycles grups as a new name for that recently forgotten generational cohort that was last known as Generation X. Born roughly between 1964 and 1979 and now well into their thirties and even forties, the generation once associated with slacker culture, McJobs, and defined by their status as the children of divorce that came of age in the era of AIDS, is now in the midst of parenthood and still seems to be distinguishing themselves from their Boomer predecessors. Although the New York Magazine article suffers from overly defining the generation through patterns of consumption conspicuously available to only a few, there is a resonance at its core characteristic of generational distinction and coherent with that which emerged in the early and mid 1990s.

Most of the popular culture alternates between swooning over our ever present, important, and catered to Boomer parents and the technologically engaged “Millenials” coming after us. Sure, members of Gen X are present on television, but since the mid 1990s and height of Beverly Hills, 90210 and the arrival of Friends and Friends-clones, remarkably little television storytelling has particularly emphasized this generational identity. Admittedly, I’ve pitched the Generation X thirtysomething many times in the last decade (although not necessarily to anyone who actually makes television shows). Given its high concept obviousness, I’ve waited eagerly, sure someone would stumble upon it. We’ve had some meek attempts (Relativity [1996-7], with its Herskovitz and Zwick/Katims authorship being the most creatively legitimate), but for the most part, narratives that construct characters of this age range as distinctive from Boomers or characteristic of a group acculturated by shared and common experiences remain limited. 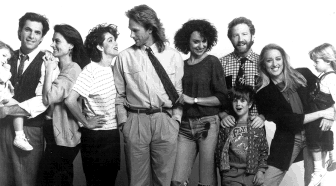 The cast of thirtysomething

Since the conclusion of Friends, Generation X shows have largely flown under the radar and rarely have been described as such. Lorelai Gilmore arguably became the first Gen X mom in 2000 although little promotion ever positioned her this way. This season brought closest fruition of the Gen X thirtysomething with the quickly cancelled Love Monkey (that notably returned quintessential Gen Xer Jason Priestly to our screens) and ABC’s struggling-but- surprisingly-renewed What About Brian?. (FOX’s short-lived Reunion might also be considered with its cohort from the class of 1986. Although it offered a nostalgic review of music and fashion in its year-per-episode structure, the murder mystery narrative provided its focus).

These series utilize what Rob Owen identified as a central trope of 1990s Gen X shows–the depiction of “friends as family”. Instead of the stories about single friends in the city, Love Monkey and What About Brian? catch up with who the characters of the previous shows might have become ten years later. The families of friends are now in various stages of coupledom and child bearing, all with more steady–although not necessarily conventional careers–and in both cases, a sibling relationship functions centrally in bringing the group together (similar to that of Brenda/Brandon and Ross/Monica). Attitudes toward work and personal lives were among the primary ways 1990s discourses identified the distinction of Gen X and these remain the primary axes by which contemporary shows that acknowledge generational identity as significant continue to draw this distinction.

Notably, as in the case of 1990s narratives and Gen X discourse, depictions of Gen X identity remain predominantly limited to those who are white and of a particular economic and educational privilege. This mirrors the type of depiction present in thirtysomething, which while hailed as a generational touchstone, examined the struggles of a privileged few. Notably, the short-lived (and in my mind more interesting) Love Monkey included an African American and gay character and foreground these identities as of narrative significance, not mere window-dressing–as it seems is the case of the casting of Rick Gomez in Brian. Whiteness, affluence, and privilege have been central if unspoken aspects of the Gen X identity, as 90s discourse emphasized the lack of professional opportunities that led to college grads taking McJobs and moving back home. Likewise, Adam Sternbergh’s look at contemporary grups features a “New York” much like that of Friends and Sex and the City–curiously devoid of non-white folks–which is very different from the multicultural diversity often ascribed to the Millennial generation.

CBS offered Love Monkey only three airings while ABC renewed What About Brian? even though it averaged the exact same 2.9 rating in the 18-49 demographic averaged by Love Monkey. The consistent commercial failure of Gen X shows (although admittedly, none have been expertly written and executed) is surprising given that the generation so precisely embodies the commercial target as 27-to 42-year-olds. Perhaps related to the hip music tastes Sternbergh notes of grups, we prefer our television set in our adolescent past, as it is my unconfirmed suspicion that the members of Gen X accounted for much the Buffy audience and have since returned to high school as a primary audience segment of Veronica Mars. Members of the generation command a growing presence among the Hollywood writer-producer ranks (Amy Sherman-Palladino, Joss Wheedon, Kevin Williamson, Rob Thomas, J.J. Abrams, Shonda Rhimes, Greg Berlanti) in a manner that might suggest such stories will emerge now that many have worked through the stories from their adolescence.

Although I continue to wait for a narrative that might provide my generation’s thirtysomething by encapsulating some of the challenges of negotiating work and family common to this generation, it is worth returning to Owen’s book for the other characteristics that he noted of the generation’s television preferences back in the mid 1990s. He acknowledges the popularity of serialized storylines among Gen Xers in the 90s, suggesting that my Lost (or Lost) Generation title may also point to what the generation is watching, if not melodrama explicitly reproducing its struggles. Indeed, many of the Oceanic 815 survivors are members of the Gen X cohort, which points back to the significant fact that members of Generation X arguably dominate current primetime television narratives, its just that these narratives make little of how this generational identity might result in distinctive characterization.

So I end with more questions than answers about the generation that has become grups, whether there are stories particular to their experience, and, if so, why they seem obscured from view. As my shifting pronoun use suggests, these queries are self-indulgent as I seek to explain why the characters I’ve recently found most compelling are alternatively so much my junior (Veronica, Rory, Willow) or even my senior (the female cast of Judging Amy). It seems possible this absence relates to the real ways families and work have and are changing–perhaps because of the maturation of a generation that came of age amidst distinct socio-cultural norms, but certainly also because of adjustments in contemporary economic pressures. The void of compelling depictions of the revaluing of patterns of work and consumption, challenges of shifting gender scripts, and expanding definitions of families help hegemonic models remain entrenched while emergent trends suggest valuable alternatives that may alleviate problems characteristic of previous norms. Given the breadth within even a small generational cohort such as Generation X, it is always difficult to speak of norms consistent across other axes of identity, yet generation too can inform identity in meaningful ways. This generation that was once perceived to be lost in an endless adolescence has moved on to the next phase of life, but it is not necessary to rename it. It might be time, though, to think more about the stories emerging from this generation of writers and the stories of this generation that are and are not making it to our screens.

2. The cast of thirtysomething