(TV)antipathy: A Prolegomena to the Metaphysics of Television Hating, Part Two 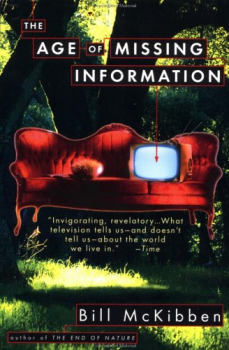 The Age of Missing Information

The Age of Missing Information. Bill McKibben's book (1992) was pretty much the last of my major anti-television influences. Two years before its publication I had fallen in love with a television show for the first time. As in all first loves, I would never forget Twin Peaks, and though its cancellation broke my heart, I was ready, willing, and critically enabled to love again and would, several times. Still, I found the arguments of McKibben compelling. Writing after the Golden Age of (TV)antipathy, the author of The End of Nature sought to change television hating's dominant controlling metaphor from drug addiction (Mittell) to environmentalism. The media ecology of The Age of Missing Information, you will recall, is the record of–or, more precisely a meditation on–an experiment, an extended comparison and contrast essay on two days, on two realms of experience, two sources of information: 1) two thousand hours of videotaped television, all recorded on a single day (May 3, 1990) on the 93 channels of Fairfax, Virginia's cable television and 2) a summer day spent entirely in nature. A chapter of description and commentary, call and response, to an hour of television is followed by reflections on his time in the “real world.”

For the most part his insights about TV itself–that television alters our perception of the natural world; that it functions as an “emotional thermostat”; that it is “less an art form than the outlet for a utility”; that its content is almost immaterial (television, he notes, “can find subjects of interest to all only by erasing content”); that television reduces all that came before its existence to “prehistory” (the medium's four decades, McKibben writes, now “seem utterly normative to us, the only conceivable pattern for human life”); that television preempts our suspicion of it by ceaselessly belittling itself, adopting a “deride and conquer” strategy–these are not really new. Mander, Todd Gitlin, Miller–all have written urgently and incisively on such themes, and McKibben duly credits their influence.

He casts his nets wide. (A good one third of The Age of Missing Information could be characterized as digression, asides, usually interesting in their own right, not so much about television as suggested by its Rorschach patterns.) He explains why it is more important to understand the Brady Bunch than Twin Peaks. He analyzes television's role in the “globalization of markets.” He exposes the false appeal of animals on TV (“nature documentaries are as absurdly action-packed as the soap operas, where a life's worth of divorce, adultery, and sudden death are crammed into a week's worth of watching”). He contrasts God in nature vs. God on TV. He speculates on why it is that the memories of Baby Boomers are “spookily familiar.” He shows why an ad for “Glassmates” reveals how paltry are “the kind of dragons we have left to slay” in an age of consumption. He wonders about TV's motives in “actively . . . savaging . . . an old order it once helped set in stone.” He traces the evolution of teenage telephone secrecy from Leave it to Beaver to One Day at a Time. He investigates the “breakup of [the] Donna Reed order,” explains TV's complete inability to bring war into our living rooms, considers the techno-effects of virtual reality and HDTV, ponders what would happen if God delivered the Ten Commandments on the Today show, recounts how Finland terminated a McDonald's ad because “it falsely leads people to believe that a Big Mac can replace friends and ease loneliness,” and identifies television's role in making weather less real.

TV's inauthentic celebration of choice draws McKibben's special attention: “As much as [television] loves choice . . . it doesn't actually believe in choosing. It urges us to choose everything–this and this and this as well.” He unearths television's secret link to contemporary disembodiment:

If it is doing its job “correctly,” you lose consciousness of your body, at least until a sort of achy torpor begins to assert itself, and maybe after some hours a dull headache, and of course the insatiable hunger that you never really notice but that somehow demands a constant stream of chips and soda. If you off your nose to spite your face, or for any other reason, it wouldn't impair your ability to watch television. 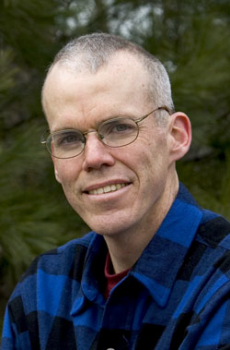 A baby boomer like myself, McKibben grew up with television and immerses himself willingly in it, not with metaphysical intent, but just to watch what he calls “TV TV.” Continuing his metaphor, he compares his experiment to “spending the holidays with your parents once you've grown up–in three days you comprehend more on a conscious level about your mother than you did in twenty years of living with her.” And what he discovers is that the parent he had once loved is in fact dysfunctional.

What is new here is the context in which such ideas are presented. When Susan Sontag issued her call for a new “ecology of images” almost three decades ago (in On Photography), she had in mind the application of the principles of a then emergent science to the proliferation of media messages in order to safeguard our consciousness against their possible polluting effects. The Age of Missing Information answers her call, partly through its own metaphors (consider, for example, McKibben's observation that “The most fanatic environmentalist doesn't recycle with half the relish of television producers”), but most of all in its project to study television as a phenomenon in and of the natural world. The book's original dust jacket shows a “peaceable kingdom” scene with lion and lamb lying down together–before a television set.

Apocalyptic-minded culture critics are fond of suggesting that, as the century nears its end, we are “rearranging deck-chairs on the Titanic.” However accurate, the metaphor is now a cliché. Let me offer an alternative. We are, to be more precise, chained in a state-of-the-art version of Plato's cave of illusion, remotes in hand, grazing shadows. As we come to live this life of allegory, as the myth becomes complete, it seems less and less likely that a philosophically-minded couch potato–or even a semiotically inclined one, enraptured by TV's new, open textuality–will bother to get up to bring news from outside; less and less likely that the shadows will be cross-checked against reality. As I write, new remote powers are on the horizon for average consumer. Soon we will be able, using our RCDs, to select camera angles on certain programs, track into the frame in search of other things to see, interact with the diegesis from the comfort of the sofa. And in the near future, we will be offered even greater control. With the likely late 20th or early 21st century dissemination of Virtual Reality–described by William Gibson, the creator of cyberpunk science fiction, as potentially “lethal, like free-basing American TV” (Austin, 1992), the remoteness offered in the late 1980s and early 90s will come to seem amateurish.

I found that passage credible because I wrote it, and, almost a decade later, it still strikes me as phenomenologically, ecologically relevant. As a critic of television, however, I was no longer sleeping the sleep of the just. My relationship with the medium had officially become love-hate.

“We become what we hate,” the Irish poet and mystic Æ once wrote, and though he was thinking of The Troubles and the historical relations of England and the Emerald Isle and not of (TV)antipathy, the observation seems telling, at least on a personal level. Over the last two decades my own Golden Age of (TV)antipathy distaste for the medium has morphed into an obsession with it. The literary scholar who had once concurred with Jerry Mander's call for television's eradication now takes sides with television critic David Bianculli's observation in Teleliteracy that the anti-television stance I have catalogued here is exactly what we might expect from “someone who writes about TV a lot more than he watches it–or, at least, of someone who watches all the wrong things.” Careful to insist that he is not himself “soft on television,” Bianculli's book seeks to expose the origin and nature of television prejudice, a form of bigotry still acceptable in even the best intellectual circles. “Where else,” he asks, “but in the land of TV criticism are prejudice and ignorance considered assets?” “Almost alone among the major critical disciplines,” he complains, “television criticism fosters–and often encourages–an overt antagonism toward the medium being analyzed. A film critic displaying constant contempt for that medium would soon be replaced; a TV critic with the same attitude would likely be promoted.” Asking for a “change of venue” for television's trial, he then sets out to provide it. His seminal book, with its large historical canvas, is the new court he seeks. “Only idiots,” Bianculli concludes, “continue to think of [television] as an idiot box.” Film rose to prominence and attained serious consideration as an art form, Bianculli suggests, because TV “absorbed most of the cultural flak.” The era of TV the flak catcher is, Teleliteracy argues convincingly, may and should be over.

1. The Age of Missing Information