The Curious State of Live TV 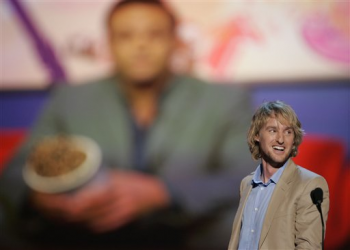 Owen Wilson and Vince Vaughn at the MTV Movie Awards

We're in the midst of a bonanza stretch for live television. World Cup has
ushered in a heightened state of global entertainment realtime, where anything but live is too late! Watching the matches forces you to think about, among other things, all the people watching the matches everywhere else in the world at the same time. Millions of fleeting thoughts about television liveness float up and mix with considerations of national pride, German history, hooliganism, defensive versus offensive strategies and so on. It's true: World Cup is about more than sports!

The warm up act, for me at least, was this month's MTV Movie Awards, the latest installment of that Golden Popcorn festival of satire, a gift of glaringly coopted patterns of “displacement” and “reinscription” that somehow after 15 years manages to remain revealing. This year, for instance, before the onset of World Cup, it forced reflection on the state of live television.

Here, for example, is how Chiff.com grapples with the facts of the extremely popular broadcast show: “The 15th annual MTV Movie Awards premiered live on Saturday June 3, 2006, at the Sony Pictures studios in Culver City, California, with the first taped airing televised on June 8….” Which is to say that, to the surprise of many viewers, there would be two shows, that the show would not air live. In fact it has never aired live. Or perhaps most accurately: It is always aired live on a five-day tape delay! Here we have in no way a live show except that the buzz around it is always somehow about liveness, the immediacy of the event, which is orchestrated to convey that quality. Everywhere the show is linked to the word “live,” as are the performances, as in, “click here to download live performances and backstage interviews,” of which nothing of course is really live. All of which wouldn't be worth writing about if I didn't believe it amounted to more than a matter of semantics and marketing.

Rewind to the flop Academy Awards broadcast this year, for example. The vote was nearly unanimous that, despite Jon Stewart and Brokeback Mountain, the show was remarkably unentertaining. The failure, the flopness, of the broadcast was surprising to many but it shouldn't have been. So what happened to the Oscars?

Consider that Oscar night television was as stiff as Oscar night internet was fully alive. This was roughly the tenth anniversary of Oscar night coverage on the web and it seemed to reach a critical mass of sorts, relaxing into weirdness all over again: slickly professional on one end of the spectrum and clunkily experimental on the other. Coverage included streaming video on all the major Oscar sites and video blogs of people watching and commenting on the show all over the world. Salon's audio blog featured Camille Paglia and Cintra Wilson talking during the commercial breaks at lightning speed and then semi-pausing to watch the show while listeners were treated simply to deadtime, a putting down of the phone, an occasional incomplete pressing of the hold or mute button. It was all polished and amateur, professional and personal at the same time, and often on the same sites. 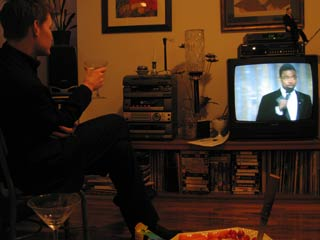 Suddenly, by contrast, it felt as though live television itself, as a genre, was tape-delayed, neither fully past nor present, an undead form of expression, as if, for the fully mediated generation (all of us presently alive and online) live television had surrendered to the concept “live television,” something we understand as and employ for effect, a development made clear in the case of the MTV Movie Awards, which gave up the pretense of live for a more dedicated (and entertaining) re-enactment of live as entertainment genre. In fact, live television now seems most fully alive and relevant in its role as a ghost in the world of reality TV. The hyped live quality of the thing itself is at once anachronistic and banal. In the era of ubiquitous webcams, digital photos, security video, who cares that a TV broadcast is live? It certainly seems less live than a lot of what we see.

Of the genres where live television still rears its head, the genuinely live award show is particularly instructive. Anthropologist-media critic Thomas De Zengotita might say that the live award show persists because it caters so blatantly to viewers used to being the center of the media universe, where everything is made to give individual infotainment pleasure. Liveness only matters in this case because the ceremony is going on somewhere and we weren't invited to attend. For that reason it is essential for the “millions of viewers around the world” that the show appear as live as possible, no matter how dull, prepared, prepackaged. The people on these shows act like live performers to demonstrate the show's liveness as a commodity. What they're selling though is not live, in the old sense, as in fresh and
relatively extemporized, but real, in the realtime sense, as in “you're
not missing anything because it's coming to you in realtime to be downloaded in the cognitive as well as the technological sense, fully available for you to do what you can with it and no later than everybody else can, including the realworld attendees!” In this regard the persistence of the live award show sheds light on those other persistent live TV genres: sports and news, particularly, in the latter case, disaster and war footage–broadcasts of which stay on the air regardless of the fact that there's often nothing to show. Once the storm arrives, natural or manmade, it's live TV's role simply to invite us to attend. 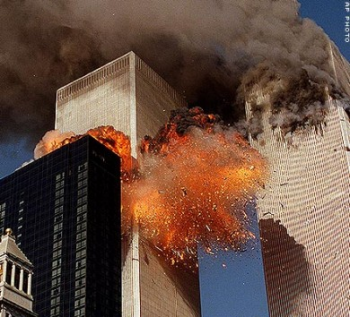 In today's visual culture, the live has been taken over by the real, by the authentic seeming series of images, in which so-called amateur video and digital photos rule. On one end there are, for example, the photos of Abu Ghraib, which insist upon returning partly because they strike us with all the power formerly ascribed to “live” images in that they seem immediate, authentic in what they reveal, and in all the important ways unreflective in how they were produced and “broadcast”–and they did seem to be broadcast because they came to so many of us over the web, which is what made them different than traditional news photography. The aesthetic of the images appears legitimate, readily identifiable with the “real” images we deal with in our own lives as visual media producers and consumers. The torturers were having a party. The obviousness of that fact underlines the horrible reality of the other facts of the images.

On the other side of the coin, elsewhere in the realm of amateur video, we have people lip-synching in their bedrooms, video that comprises some of the most popular downloads on the web. This reality footage, and its actual live webcam and security camera counterpart footage, has moved into the place formerly occupied by the old category “live” for its not seeming fake or scripted, for seeming, regardless of subject matter, breezy, embarrassing, tense.

Live TV as it looks to us now–stiff, undead–is a by-product of media evolution. What we've been watching in action for the past five years or more is a medium content shift. Having already moved off TV in a practical sense, live is now moving off in a conceptual sense as well, echoing content shifts of the past–the shift in storytelling, for example, as it moved from radio to TV in the fifties. Television storytelling was different than the radio version, so it altered the concept of the dramatic serial and highlighted in the process the peculiarities of radio storytelling and the era it served to entertain.

Given the fact that we're in the throes of a media evolution that is characterized by hyper-convergence culture, where content delivery systems change from day to day, it makes sense that whole genres of content are likewise evolving. In that light, the much-lamented evolution of TV content toward the sensational, the canned, the phony makes perfect sense. The migration to the web of live as a concept–real, edgy, unpredictable, raw–has freed TV to dedicate itself to the unreal and the unreal-real, the ultra-hyperpackaged. From now on, TV live will mean even more slick versions of O'Reilly and Couric and faux-live products like the MTV Movie Awards, The Real World and The O.C.

Live television is being replaced by “real” images, the product of an amateur visual culture that has exploded in popularity and as an aesthetic across genres, including news, film, art, publishing and fashion.
In effect we are living in the era of live TV even as the thing itself passes. We are inundated with and surrounded by–we are the creators of–its digital progeny. In order to come back to life, the Academy Awards will either have to give up on live, MTV-style, or become “real-live” by asking the celebrities to broadcast the show from their seats, creating a “horizontal” broadcast that would appear at least to acknowledge that now each one of all of us are “players” in the ever-expanding and -converging information-entertainment industry blob.

de Zengotita, Thomas. Mediated: How the Media Shapes Our World and the Way We live in It. New York: Bloomsbury, 2005.