Micro-Ethnographies of the Screen: Classical Baby 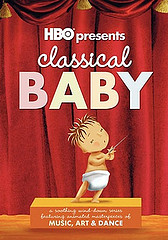 As I write this column, a copy of The Culture Industry by Theodor Adorno peers out from behind a stack of books piled on my desk.[i] His well-known arguments against mass culture and popular entertainment have been repudiated to a great extent by media and cultural studies scholars who produce empirical research on audiences. (Of course, one need not go to the extremes of late 1980s conception of the “active audience” to find evidence of the more varied, and at times sophisticated, uses of media by the average Joes and Janes of urban and rural America.)[ii] What interests me here is that part of Adorno’s argument that seems to be unconsciously reproduced by educational psychologists and well-meaning authoritarians who set themselves the task of eliminating, or at least minimizing, pleasure in daily life. (One should not march with the extremists and find that all pleasure must necessarily lead to hedonism – either in aesthetics or politics.) In the name of an authenticity of experience, these well-meaning scolds insist on demeaning audience members who “consume” television for more than the maximum allowable dose of a few glances a day – for even in the age of the Internet, television remains the bête noire lurking in the thicket of the artificial and the inauthentic. Even more contemptible to these media-phobes are those permissive parents who allow their children to consume huge amounts of television and more so those negligent parents who allow their babies to watch “TV.” Babies (as the tabula rasa of our society), this argument suggests, are surely the most defenseless against the onslaught of media and thus must absorb wholesale whatever muck oozes from the programming coughed up by television. Apparently, any activity is better than watching media. To extend this line of argument, self-mutilation is better for you, as a form of authentic human experience which allows one to become more in touch with one’s body, than watching the latest standardized, mechanized, formulated narratives on offer from television. (If you question the accuracy of this extreme notion then check out the Austrian action artists of the 1960s – Hermann Nitsch and Rudolf Schwarzkogler in particular. I am not prepared to deride their work, but the motivation behind it – the immersion in the authenticity of the body – seems questionable at best, and does lead to the conclusion that self-mutilation and defilement brings one closer to the essence of life.) Of course, the obvious flaws in this argument are revealed by noting the flattening out of the actual contents of programs as if the tube were simply a mind control ray aimed at the parent – a consumer in the flesh – and the child – a consumer in training – as if Sesame Street and Girls Gone Wild were equivalent forms of programming.

Now this argument, positing the corrupting power of communication technologies in the face of the authenticity of life, has deep historical roots. Plato made a similar argument against writing, which is as famous as Adorno’s and no less caustic. In the Phaedrus, Plato warns that writing robs children of an authentic education and undermines the faculty of memory in adults:

Thanks to you and your invention [the god Thoth has introduced writing to Egypt], your pupils will be widely read without the benefit of a teacher’s instruction; in consequence, they’ll entertain the delusion that they have wide knowledge, while they are in fact, for the most part incapable of real judgment. They will also be difficult to get on with since they will have become wise merely in their own conceit, not genuinely so.[iii]

Is this not cut from the same argument made by those who warn against the negative effects of television on children? When pedagogues suggest that reading a book is qualitatively superior to watching television, do they recall Plato’s deep suspicion of the effects of writing on memory and wisdom? Of course not. For many critics of television, reading is considered active and therefore a positive contribution to the psychosocial development of the individual. Television is passive and an activity often associated with brutes, philistines, and the poorly educated.

According to a recent article on the front page of The New York Times: “Studies have proven that educational programs like ‘Sesame Street’ can aid learning for older children. But few studies have focused on developmental outcomes for children under 3.”[iv] Which seems to imply that if there have been no studies conducted – again by implication these studies must be carried out by experts, a form of the rationalized elites against whom Adorno warned (making Adorno’s argument more complex and nuanced than some cultural studies antagonists of his ideas will admit) – then there must be negative consequences for infants watching television. The corollary argument that reading a Disney picture book of Winnie the Pooh will some how damage a child’s brain is rarely made by this clique of positivist experimental types – but is it not equally possible that damaged neural pathways might occur from the printed Winnie the Pooh as much as from the televised Dora the Explorer? Damn, that Piglet and his spineless toadyism to Pooh’s suave honey bear. Praise be to Boots and his support for Dora on her complicated missions!

At this point, let me provide the reader with some needed background context. I am a new parent. Like most parents, I want to do what is best for my daughter, so I have collected scads of instruction manuals on how to raise an intelligent, well-adjusted (I suppose that excludes a future for her as a revolutionary or an artist) child. During this period of fact-finding about what constitutes proper parenting, my brother sent me a DVD of the HBO special entitled Classical Baby. Many other parents had extolled to me the virtues of the Baby Einstein series and related baby genius media, so I was a bit resistant to these HBO disks. I had no desire to enforce brilliance or cleverness on my daughter, and I certainly felt no need to compete with other parents in my immediate circle of friends. But, as much of my research centers on the history and theory of educational television, I found myself intrigued by HBO’s foray into this area (especially in light of the history of television’s being conceived as a way to deliver instruction and enlightenment to the masses and thereby becoming the subject of funding initiatives provided by the liberal Ford Foundation, a sequence of events which eventually led, in large part, to the formation of the Public Broadcasting System). Blissfully unaware that no major studies had been conducted to determine whether or not a baby of three months should be exposed to television, I began to watch Classical Baby with my daughter a couple of times a day. Classical Baby is a DVD set of three disks – an episode per disk with one dedicated to art, one to dance, and one to music. Each episode is made up of animated segments joined by a framing narrative that features a baby who enters a concert hall and conducts an orchestra composed of various cartoon animals. Each segment is animated around a short excerpt from a popular piece of classical music (as well as from assorted pop music favorites – and at this point Duke Ellington does seem classic and worthy of inclusion in a program that features Grieg and Tchaikovsky). To complement the highbrow music selections, the art program features images based on the work of modern artists such as Mondrian, Leger, and Cassatt and the dance program features the work of George Balanchine and Jerome Robbins. The segments are short, simple, colorful, and fun. Not much thought or attention is necessary for baby to get it (such as it is). As for my daughter and I, we watch the programs together – not through some pedagogical imperative; it just seems more enjoyable that way – and we dance and perform (I sing while my daughter twitches and coos) as the programs play out before us. Not sophisticated spectatorship, but I am unsure how this fails to measure up to other activities that we could engage in. Susan Linn, a psychologist associated with a group that calls itself the Campaign for Commercial-Free Childhood (which begs the question of what could make Classical Baby more commercial-free, as it currently has no commercials in it), is quoted on their website: “Babies do not need HBO or any television to bond with their parents or enjoy music. Turn the TV off, put on your favorite music, and spend some time rocking, singing, or dancing around the room with your baby. Now that’s bonding.”
[v] Obviously, one can ask why the stereo – another form of media – is substantially less dangerous to the baby psyche than the DVD player. And was I in error when I spent time “rocking, singing, or dancing around the room” with my daughter while the TV was on? Is the television image – the modern version of the demon against which the original iconoclasts fought – so dangerous a supplement to our auditory sensation that it must be eliminated from a baby’s environment? I can see that an argument could be made that by selectively excerpting the art, music, and dance from its original integral form – another aspect of Adorno’s argument against mass culture – one could be denying a baby the fullness of the aesthetic experience intended by the artist, but I prefer to think that this early exposure to works of art and music – many of which I studied in depth during my own schooling – will create an impression that might form the foundation for a love of art, music and dance later in my daughter’s life. I only hope that she does not grow up to be an HBO Classical Baby snob and look down her nose at whatever media future audiences consider pleasurable.