Is New News Better Than No News? 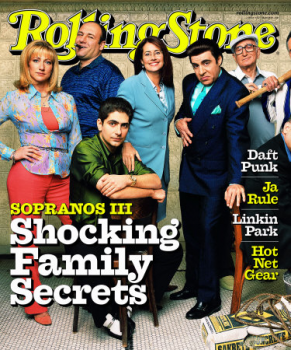 Cast of The Sopranos on Rolling Stone

Few people seem optimistic about the state of American television journalism today. Indeed, that phrase, “the state of television journalism today,” is usually preceded by either “sorry,” “pathetic,” or some equally destructive adjective. Opinions abound regarding how and why TV journalism is clinically depressed. So many opinions, in fact, that I feel justified in my laziness at not citing them: surely, anyone reading this has either read or written such eulogies at some point. Of particular concern, though, are those occasional studies, frequently borne out by war stories from the classroom, that suggest an ever-decreasing percentage of young people care about and watch TV news.

In the face of this gloomy picture, it might be helpful to examine what TV is doing about this. An easy and accurate answer is “not enough.” But of late, I've become something of a “new news” junky, taste-testing some of the new news formats that are popping up. The following is my picaresque journey through a few.

But first, if it is a journey, why leave home? Much network and cable news these days, let's face it, is astoundingly boring. Yes, we should be watching it, and yes, it shouldn't just be about entertainment. But still, as television has matured stylistically to the grand displays of image and sound one can see in CSI, House, or The Sopranos, and to developing, involving narratives as found in Lost or 24, network news and many pundit shows look remarkably stale: talking heads and more talking head (and heads that to the average youth must look like grandpa or one's best friend's mom wearing too much makeup). White upper-class males predominate, they all appear to belong to the same golf club wherever it is that New Yorkers or DCers tee off (as best illustrated by the chummy chats on pundit shows), and, as detailed in a rare qualitative audience study of news viewers by Justin Lewis (1986), few of them know how to tell a decent story (ie: don't begin with the ending), and they tend to tell their stories too quickly in a coded language. Yes, we should be good citizens and look through the boredom, and yes, many problems other than TV news are behind the American art of apathy, but some of the blame lies at the feet of a genre that in real terms has continually resisted TV evolution since the fifties.

Enter Fox News. Odious for its shifty redefinition of objectivity, as Shanti Kumar recently pointed out in an excellent Flow column, Fox is nevertheless one of the few profitable news outlets on American television today. We should resist its line that this merely reflects a conservative American reaction to “the liberal media,” especially since the combined ratings of the supposedly liberal media handily trump Fox's. Rather, they have taken the task of appealing to other viewers (by which I mean viewers who are not members of the same NYC/DC golf club) seriously. They have also, of course, gone way overboard, leaving several basic tenets of journalism behind, instead preferring shows with lots of yelling and angry people. As any Hollywood mogul will tell you, conflict sells. But when actual reporting is discounted to sell the ensuing mostly insular mediaworld stories (“Why NBC is lying to you, and why they hate America”), it is indeed a pity that people are buying. Nevertheless, Fox represents an important first step in the journey into new news, partly because its success suggests a need and a desire for something new in the world of news, and partly because it acts as the Scylla and Charybdis around which our Odyssean voyage must steer clear. 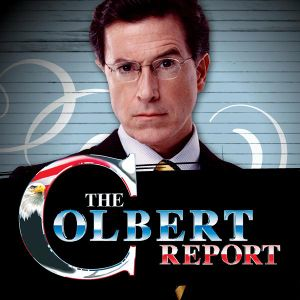 The Colbert Report on Comedy Central

Next, we reach Comedy Central, with The Daily Show with Jon Stewart and The Colbert Report. Both are, to my own tastes, brilliant parody, and not only play with the news, but demand constant reflection on what news actually is. Their status as comedy programs can be over-stressed to the point of unfairly erasing their importance as at times the last bastions of a public record and memory in news-related discourse: when a politician directly contradicts their words of a year ago, nine times out of ten it is The Daily Show that captures it, the networks news' own archival staff clearly asleep and ineffectual. But The Daily Show in particular has received its fair due in terms of Flow columnist attention, and overall, these two shows' refreshing and powerful mix of entertainment and news frequently can cause new news analysts to languor over them (justifiably), stuck in the land of the lotus-eaters instead of exploring the rest of the genre.

Moving on, then, one of my favorites is Countdown with Keith Olbermann, on MSNBC. An hour-long program, Countdown lies somewhere between The Daily Show and “regular” news. Olbermann erratically bounces back and forth between garbage news items (or, as he tends to call them, “stories my producer makes me do”), and serious, impassioned reporting. Olbermann's goofiness, much like Stewart's, can be disarming, and it is no small part of his appeal, as he mimics Dr. Evil from Austin Powers, introduces a segment with voiceover by Stewie Griffin from Family Guy, or plays around with computer graphics. But behind his quips is a principled, often savvy angle on major news stories. Olbermann sees the humor in stories, but knows when to stop joking, and subsequently, his interviews tend to be significantly deeper and more incisive than most of his network and news cable colleagues. Whereas many observers worry about The Daily Show's or Colbert's truncation of stories, Olbermann gives them due time. And yet something about his sports reporter background, mixed with his pop culture references, and his wicked sense of irony allows the news to be interesting and appealing, while it is also revelatory. Moreover, as anyone who saw his correction of Bill O'Reilly's Malmedy blunder knows, his jovial nature gives way to a brutal attack when need be.

From a sportscaster-turned-pundit to a now ESPN-ified pundit, next is MSNBC's The Situation with Tucker Carlson. Carlson has modeled his new show off of ESPN's popular Pardon the Interruptio, with the list of topics to be debated piled up in the bottom left of the screen, rotating as does the discussion. Topics come and go at speed, and each is debated by Carlson and a guest (often a sportscaster). The format makes for a snappy news program, but loses the point: the news isn't failing because it's slow, it's failing because it's already too fast, and because it's not making itself presentable or meaningful enough. While ninety seconds of debate may be all that the New York Rangers' post-season woes deserve, Darfur surely needs something more than a charade of debating-for-the-heck-of-it coverage. The format works for sports because it is fast, as is much sports speculation, but it seems too irreverent and off-the-cuff for the news, hence likely to inspire a similarly off-the-cuff approach to dealing with and thinking about the news. And, of course, every time Carlson wears his bow-tie, his youth appeal must surely drop another hundred fathoms.

Finally, chronically under-watched, but a boldly innovative channel, is Current TV. Launched to great conservative fear, due to Al Gore's participation, Current is now hiding out in the upper climes of channel 103 on my cable provider. It has no programs per se, only segments (“pods”) of about 3-10 minutes. Many of these are filmed by young people (the target demographic), many are international, and the channel encourages the submission of what they call VC2 (viewer created content). All of its reporters are young, and their news pods are surrounded by music, animation, and pop culture pods. In an age of channel-flipping, it is designed with exactly that in mind, and so requires no great time investment. News pods might examine gasoline smuggling in Iraq, transsexuality in Iran, or gang violence in Haiti. The channel doesn't so much specialize in breaking news as in the stories and lives of young people in news zones; as such, it isn't direct news on offer, but it fills in some human and background elements so poorly missing from many news stories.

Just as The Daily Show can color around a news event by offering new structures of thinking about that event, Current gives a small sense of history and context. Set up with the explicit goal of informing and educating youth, and making them better global citizens, Current offers some unique and intriguing resources to the average American youth. Admittedly a Google product placement lovefest, the channel at least tries to speak the language of news to youth, and leaves the golf club memberships, the yelling, and the bow-ties at home. Best of all, they tell good stories with “real people” at the center, and thus offer ample (empathetic) motivation to go online afterwards, in search of more information. If a key problem with much traditional news is that it grandiosely promises to tell viewers all they need to know, only to fail, Current employs what we could call a “metonymic approach,” offering small bites in the hopes that viewers/tasters will want more.

Like most picaresque tales, this one has a pretty lousy (ie: no) conclusion; but also in picaresque fashion, it leaves itself wide open to sequels. So please, in addition to comment, I would love to hear of other “new news.”

1. Cast of the Sopranos