The Dancer or the Dance?: Uses of Television and Video 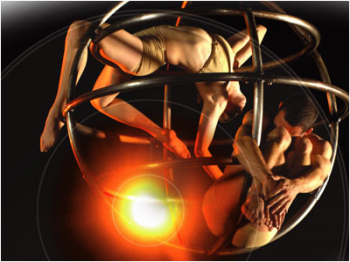 Capacitor’s Digging in the Dark

It's been twelve years since I kicked the television habit. The longer I am away from the rhythms of television programming, the stronger my response to its beguiling presence. I find myself exquisitely sensitive to television's cuts and textures, with their dizzying short-attention-span sequences and seductive beauty. Whatever I was thinking disappears when a TV screen roars to life in my vision with its talking heads and intrusive advertising. I am both fascinated and repelled, in love with its color-drenched motion and exasperated with its simplistic read of the world.

Capacitor, the internationally acclaimed dance troupe based in the San Francisco Bay Area, understands this love/hate relationship with television, with video and mitigated meaning. In their most recent piece, Digging in the Dark, artistic director Jodi Lomask utilizes video imagery to convey both atmosphere and contextual clues. “I use the video at times as a hook to bring in a segment of the audience that may fear the abstract or has trouble completely letting go of their logical mind. Culturally we are much more used to viewing projected images than live performances. By incorporating projected images, I offer a door into the work to some folks who would otherwise be left out,” says Lomask.

Watching the gorgeous beauty of bodies in motion is a sublime pleasure, one I treasure. Capacitor's integration of infared photography into their performance takes that pleasure to a whole new level. The dimmed lights soften and conceal the dancers movements onstage. A camera placed above them captures the heat of their bodies and projects this image on the screen behind them. My eyes darted back and forth during the performance, not sure where to focus. To have the two artforms together simultaneously–live performance and a mitigated, selected aspect of that performance unified with technology and being processed in real time–enchanted me.

In that moment, I understood what I had turned away from long ago: the use of such powerful technology for inane purposes such as television commercials and sitcoms with canned laugh tracks and superficial reductionistic takes on human nature. Watching Lomask and her company explore the realms of the human heart and psyche through the metaphor of traveling through the layers of the earth, I loved the presence of the video. I loved the multiple languages and the dreamworld they rendered visible for all to see. “Dance is vital, fleeting, and involves more risk [compared to video]. There is nothing so powerful as the expressive live body. But video allows me to describe with a fullness and clarity some things I could not describe through dance,” says Lomask. 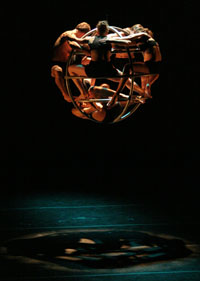 Throughout the remainder of the piece, Capacitor utilizes video imagery to both contextualize and orient the audience. They penetrate deeper into the mystery of the human soul with each geologic layer they explore. From snippets naming the layers of the earth to a buried-alive dancer emerging triumphant from the ground, the imagery enhances the narrative structure. When I left, filled with wonder and inspired by the mysterious journey of being alive, I couldn't help comparing how I felt when I watched TV for a few hours. Capacitor left me with a sense of resonant fullness, of rich completeness, where my normal response to a TV watching session was a disoriented sick feeling of manipulation and exploitation. I concluded it wasn't the medium. It was the intention with which the medium was used.

With television, a restlessness is cultivated, even celebrated. The juxtaposition of story and sponsor destabilizes meaning, leaving me as a viewer with the sense I am fighting a barrage of information. It is challenging to keep my disbelief suspended and my concern for the characters alive as the commercials create wants, needs, and desires out of thin air and solve them for me in a loud, flashy, 45 second format. By the time the characters reappear on the screen, I require a few moments to transition from a state of blocking information to allowing it in. And even then, my awareness of the business model of TV wars with my enjoyment of the story. Every product placement, every choice of consumption calls my attention to it. I question how much money changed hands to place that can of Coke with the intention of me subconsciously identifying with the character, so the next time I am at the grocery store I will be drawn inexplicable to the soda aisle and leave with a 12 pack of cola in my cart. I can feel them, all the marketers and brand managers and advertisers, all with a stake in me confusing my sense of self with the characters I see on the screen. I can feel them, and I don't like them.

When I watch the video images of Capacitor, I feel the intentions there, too. But instead of feeling I am fighting an invisible cadre of biased marketers whose direct survival depends on brainwashing me, I feel a sense of solidarity. I feel a sense of love, of passion, of hope. When Lomask utilizes the infared photography, she does so with the intention of the audience participating metaphorically in the chamber of the heart, “a place where we seek out connection in the dark but can lose it easily and a place where surface logic and judgment has no ground.” I can get behind those intentions, of raising questions and wonderings, without a simple answer pointing at a prefabricated point of view or a consumer product. As I watch the dancers and their heat-ghost selves on the screen larger than life behind them, I am filled with wonder, with a deep appreciation of the fragility of the human condition.

1. Digging in the Dark