CSI is Effecting Me 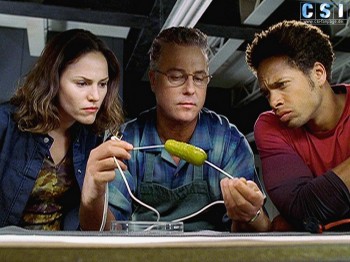 Examining a pickle on CSI

Recently, the “CSI effect” has been a popular topic in both print and broadcast media. The phrase has gained international attention, even making it into the English language newspaper here in Hong Kong where all three versions of the CSI franchise are screened on either free to air or pay television. The CSI effect is a term coined by some in the legal community and the media to describe jurors who are influenced by CSI: Crime Scene Investigation to the point where they develop unrealistic expectations about the evidence used in trials. According to this theory, the quality of real evidence, usually more flawed than its television incarnation, fails to meet their standard. As a result, they are allegedly freeing more defendants. While this is the common understanding of the phrase (and an interesting debate for audience studies researchers), the CSI effect has taken on broader notions in public discourse.

For television critic James Poniewozik, the effect of CSI has been to make network drama more homogenous. The show's success has not only created its own spin-offs in the form of CSI:Miami and CSI:New York, but its “crime-science-confession formula” is being repeated in various procedurals that now populate network television. Writing in Time, Poniewozik suggests that while the special effects of the CSI franchise (cameras that “zoom through blood vessels”) produce television that looks “21st century,” the actual outcome is conventional television that does little more than revisit the successful formula found in dramas like Dragnet.

While CSI owes its narrative structure to earlier police procedurals, the special effects of the show, its “21st century” look, also reflect a more recent preoccupation with the body. In her work on the spectacle of bodily trauma in media and social space, Anita Biressi suggests that “the climate of the 1990s onwards has been one in which body management, in all its manifestations, has become a central preoccupation” (“Above the Below”). Jason Jacobs argues that the decade saw “an unprecedented intensification of the medicalization of everyday life” which was characterized by “regular health scares, the theorization of the 'risk society,' [and] the promotion of 'healthy living'…as a moral as much as a medical imperative” (Body Trauma 2001, 12). Television added to the discourse with an increase in hospital dramas where caring and quirky medical professionals attended to the physical and psychological needs of the distressed. For Jacobs, the growth of these dramas is a direct result of the medical seeping into everyday life. While popular science may have scared us in the 1990's, it also gave us answers–to slimming down, preventing disease and keeping safe.

The recent shift from hospital dramas to the fictions of medical investigations reflects a continuing desire for medical science to calm our fears and restore our faith. One of the most successful ways that CSI achieves this is by making science visually accessible. Slick special effects reveal the body's internal response to bullets and blades. Graphics and flashback scenes literally walk us through the crime. Rather than just listening to the complex language of forensics, the CSI audience is witness to powerful images that allow the body to give up its secrets. Dead bodies are not simply recovered from crime scenes; they are crime scenes. Science solves the mystery in part, because seeing is believing. 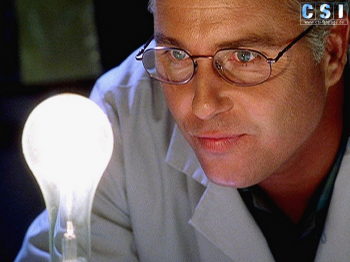 Grissom gazes into a lightbulb

For some critics, CSI's faith in science as crime solver is a dangerous form of fundamentalism. Writing in the January 2005 issue of U.S. Catholic, ethics professor Patrick McCormick argues that CSI promotes a “forensic fundamentalism” where interpretation and analysis is largely absent and evidence is never incomplete or ambiguous. McCormick sees this as a dangerous disconnect in a world where death sentences are commuted on the basis of faulty evidence and millions of crimes go unreported and unsolved. He suggests that part of the show's appeal lies in our desire for a straightforward moral universe “where the difference between guilt and innocence and right and wrong is a matter of black and white, a question of a negative or positive lab result.”

For me, McCormick's argument is the true essence of the CSI effect and its greatest strength. CSI's unwavering faith in science goes some way toward quieting the climate of fear that media often promotes. In its fictional victories over brutal crimes, we are reassured. Science tracks down the criminal, every time. It does not fail us. It gives us answers. And we want answers. And television wants us to want answers. When Aaron Sorkin wrote “Isaac and Ishmael,” The West Wing's response to 9/11, he had a character ask “why do they hate us?” in reference to terrorists. Sorkin didn't really answer the question but CSI does in the form of everyday crime. On the show, science is often the answer to both the 'how' and 'why' of murder. Each week suspects are faced with the incontrovertible proof of their misdeeds, which typically leads them to reveal their motivations. The crime is solved on all levels and we feel secure in the knowledge that bad things happen for a reason. If CSI effects us, it is because we want to believe that DNA evidence, amazing databases and teams of people in lab coats are able to expose dark secrets. It is satisfying to know that evil has a logical root cause. The opposite is what allows our national leaders to use labels like 'evil-doers' without the need for introspection. The opposite is too easy.