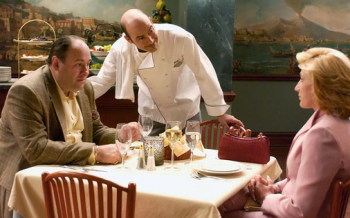 The opening episode for Season 6 of The Sopranos had Tony and Carmela obsessed by sushi. They devoured it greedily, spoke of little else but it, and, when Tony snuck out to surreptitiously ingest more of it, it almost aroused more jealousy in Carmela than had Tony’s various mistresses. Given the big narrative questions — such as Tony’s very fate — that the expectant fan addresses to the new season and the soon-to-follow finale (which will air next January: Seasons 6 and 7 were shot together), the concern with what the narrative’s characters are eating as they go toward their destiny might not perhaps seem that important. Indeed, by the end of the first episode of Season 6, Tony was close to dead after being shot by his uncle and soon, in his hospital bed, would go off in his imagination into the alternate universe of an Orange County, California conference hotel where the only sustenance seemed to be the endless freebie drinks offered him by a bartender sympathetic to his dilemma. Sushi dropped away and has not been mentioned since.

The extent to which the sushi motif disappeared so quickly (but who knows if it will figure in the narrative later on? After all, many fans keep wondering if the wounded but resilient Russian from a celebrated episode in Season 3 might not just come back) could seem a confirmation of its relative triviality, one more jokey element thrown up for quick delectation along the show’s breathless move toward its finale. But, conversely, the very fact that it came up so pointedly in the first episode only to then drop out might also indicate its importance: maybe the sushi motif had its job to perform for the season opener, did it, and then could retire from the scene. Perhaps there was something significant in the show’s juxtaposition of Tony and Carmela’s newfound passion for sushi (a raw food alluded to in Season 1 by Tony for its negative associations with potentially pungent impropriety when he wanted to assail his Uncle Junior’s masculinity by referencing his famed skills at cunnilingus) with rich Italian food, so beloved in earlier seasons but now itself given less than positive connotations. Indeed, in this first episode of Season 6, the newfound affirmation of sushi ran alongside skepticism about Italian cuisine: Artie Bucco’s restaurant was now said to lack in excitement and innovation (with ennui, the mobsters declared they could recite the menu by heart), and the only figure who lusted after saucy Italian fare was the less-than-respected representative of law-and-order, Agent Harris, who had come back from the Middle East with a parasite and was obsessed with thick hoagies from Satriale’s Pork Store restaurant.

I watched this opening episode at a friend’s house in Los Angeles, one of the capitals of a rarified cuisine for which sushi has been a key player: for the professional-managerial class, L.A. is so much the site for the meal as aesthetic tableau marked by separation of delicate items and often laced by light traces of sauces that interweave on the plate like so many dainty brush-strokes. But this night, in honor of the show and in keeping with long-running ritual, we were going for classic, rich Italian food: pasta with bolognese sauce, rounds of buffalo mozzarella, thick slices of salume and prosciuto, and so on. Like many other faithful viewers, I suppose, my friends and I celebrate each new season by the self-consciously corny and jokey consumption of precisely the sort of food that we associate with the Sopranos world, and in this we can find inspiration in such commodity tie-ins as the best-seller, The Sopranos Family Cookbook.

As the success of food-as-lifestyle culture in the form of cooking shows, manly-metrosexuals-in-kitchens, celebrification of chefs as veritable public intellectuals, etc., suggests, the obsession with food is a key symptom of urban professionals’ cultivation of everyday life precisely as lifestyle. Food is something the social stratum holds dear. Gastronomy, first, is turned into a source of challenge: Richard Florida argues in his best-selling The Rise of the Creative Class (2002), a pop-sociological outline of urban professional practice, that after long, and potentially alienating, hours in the service of the information economy (for example, all that time spent in front of the computer screen parsing data), the urban professional requires visceral, extreme experience (Florida’s example, is the yuppie fad of bungee-jumping). Florida’s creative worker dwells in a vibrant city culture in which he/she needs endless visual stimuli and strong experiences, variety of social interaction, malleable boundaries between work and play, and always wants to be abreast of the new, next thing, and here food that is bold, daring, and experimental (in spice, “exotic” origin, mixture of cuisines and tastes, and so on) might fit the bill. Food, in other words, as a source of vibrant thrill.

Conversely, the urban professional also needs moments of respite in which the franticness of life in the fast lane is traded for calm; this is the province of “comfort food” which has made its upscale come-back (especially after 9/11) and accounts perhaps for much of the appeal of Italian cuisine on The Sopranos and in its cookbook. Additionally, like HBO’s claim that it is something more than television, the urban professionals’ studied practices with food (from home preparation of it to cultivation of its refined consumption in increasingly engineered and designed restaurants) can promise distinction, whether of quality of food or of sheer price of admission. (But a recent investigative report on restaurant sushi in the Wall Street Journal [March 25-26, 2006] unveils an irony in this quest for difference and status elevation: it turns out that in many cities the same wholesaler supplies the very same grade of sushi to all levels of restaurant from downscale buffet to palace of ostensible refinement. There is in many cases no distinction of quality, just of price.)

In this respect, then, the Sopranos Season 6 opener’s emphasis on sushi may be one of the show’s biggest jokes of its own. As the urban and suburban professionals who form HBO’s privileged audience base give up their typical take-out or delivery food for the downscale richness of heavy Mediterranean cuisine they cook and consume in the show’s ironic honor, the show itself has its characters turning their backs on that fare and opting for precisely what the typical viewers have given up for the night. The Sopranos has received prestigious awards and accolades for its innovativeness, and here the seemingly throwaway joke reiterates just how the show’s inventiveness is one that directly incorporates awareness of the audience into its very structure. HBO sets out to win over the “quality” demographic, but it clearly also is toying with — and even mocking — the values of the members of that demographic.

For all the seriousness of theme that some critics and TV scholars — most of whom speak from and for the quality-demographic — have attributed to the show, The Sopranos works fundamentally perhaps as a defiant challenge or game that is played out between the industry of creative workers who construct the series and the audience of creative workers who consume it. The joke on Japanese/Italian cuisines then is only the most recent manifestation of a duel/duet between a channel looking for distinction and spectators looking for distinction that in previous seasons manifested itself in the representation of upscale urban professionals as sanctimonious, hypocritical, patronizing, naive, voyeuristic, and so on and so on: the show seemed to be testing how far it could go in assailing the very demographic that makes up its preferred fan base. That the urban professional spectator can relish such challenges to its own sense of being implies that the audience for The Sopranos is willing to follow the show in its every twist and turn, even at its most critical or most subversive of upscale lifestyle and the very values of personal pleasure that the stratum of the urban professional holds dear. 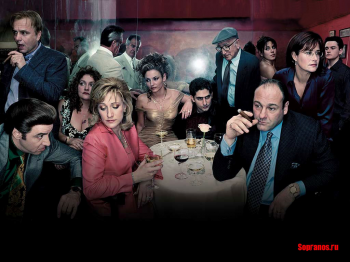 That this audience is indeed so tolerant of the jokes and surprises being played out on it cautions us to not assume that a playful challenge by a cultural product (in this case, the inventive Sopranos) to lifestyle values is the same as overthrow of those values (the reader might remember 1970s film theory’s obsession with the subversive text and how far that got us with a capitalism so resilient that it could make subversion marketable). Richard Florida’s description of the creative class is useful as a description of the lifestyle and the emotional needs but worrisome in its valorization of a creativity defined in the abstract and disconnected from political import. There is little sense in Florida’s study of the specific purposes to which creativity could be applied, and of the contexts in which it is applied, so that, in the end, all creative workers in all sectors end up resembling each other. It is sobering to realize that everything he says could apply equally to a military researcher developing new scenarios for war as to a worker in the creative media industries. For both sorts of “creative” workers, it’s all potentially just a game in which nothing matters, not even one’s own commitments (which means there are no commitments to be assailed and subverted).

Whatever else it provides, television perhaps offers training in game-playing: learning, for instance, how to shift allegiances, how to accept momentary defeats, how to care about little but the thrill of unfolding play. Gaming has become a keyword central to our moment, and it is that very centrality that I hope to address in my next column for Flow.