In the Tuvaluan language, the phrase, “Tupuna o ai? Tupuna o matou” translates as “Whose homeland is it? It is ours (exclusive)” (from Handbook on the Language of the Ellice Islands by Donald Gilbert Kennedy. This statement seems questionable to me these days, though, and I suspect most Tuvaluans would agree. Tuvalu seems to epitomize several forms of exploitation and usurpation representative of lifestyles coming home to roost in the 21st century–even though the nation has found resourceful coping mechanisms. Notably, Tuvalu has made headlines in recent years for two oddly juxtaposed reasons. First, the fact that increased sea levels attributed to global warming makes it possible that the nation will be submerged in the near future. As author and environmentalist Leslie Allen reported:

“The planet’s fourth smallest nation, they say, faces extinction because of climate change. Rising seas and deadly storms have reportedly started to swamp the islands, and fears are growing that Tuvalu will be uninhabitable or will vanish entirely within a few decades. Prime Minister Saufatu Sapo’aga told the United Nations [in 2003] that the global-warming threat is no different from ‘a slow and insidious form of terrorism against us.’ Independent scientists also offer a grim forecast. ‘Because of its location and physical nature, Tuvalu is particularly susceptible to the adverse impacts of climate change and in particular rising sea level,’ concludes a 1996 scientific study coauthored by the South Pacific Regional Environment Programme and the government of Japan.”

Apparently many Tuvaluans are preparing to “escape” to higher ground in places such as Australia and New Zealand should their country cease to exist. Much as attention needs to be called to this dire situation, though, it is another set of headlines I wish to deal with in this article. That is the sale of Tuvalu’s assigned Internet domain name, “.tv or dot teevee,” to North American commercial interests, as this symbolizes all manner of economic disparities. First, some background on Tuvalu and its culture is in order.

The nation of Tuvalu consists on nine coral atolls (the ninth inhabited only since the 1950s; the nation’s name translates roughly as “eight atolls”) in the South Pacific. The islands, once very sparsely populated (mostly by migrants from Samoa), were discovered by Spanish explorers in 1595 and colonized by Great Britain in the 1800s. The country’s colonial name was the Ellice Islands. The islands proved a strategic location in the Pacific theater for American forces during World War II. On January 1, 1976, the Ellice Islands were administratively separated from the Gilbert Islands (now Kiribati); on October 1,1978 Tuvalu became an independent constitutional monarchy, and in 2000 it became a full, sovereign member of the British Commonwealth and member of the United Nations (with the help of revenues from .tv sales). The population of Tuvalu today is 11,636 (World Almanac and Book of Facts, 2006). 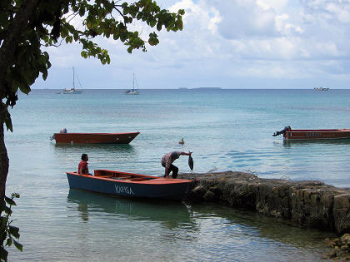 Tuvalu is not as much of a tourist destination as one might expect given its tropical location. There is a traveler’s guide web site, Timeless Tuvalu, produced by Tuvaluans and sponsored by the European union, but it is hard to locate through a search engine. Also available to prospective tourists are pages from international travel agencies or tour guides, even though many of the links on these sites are broken. Traveling to Tuvalu appears to be a challenge that only the most determined (and time-endowed) tourist would take on. There are a handful of four to sixteen-room “lodges” and “guest houses” listed for accommodations in Funafuti, the capital, and virtually nothing elsewhere. While the landscape surrounding these buildings looks strikingly beautiful, the accommodations themselves seem Spartan. No matter; it would be very difficult to visit Tuvalu during the two weeks most people have to spend on vacation. There is a tiny airport on Funafuti, but it is served only twice weekly by Air Fiji (at $650 for a round trip) — so one first has to get to Fiji, which itself is no small undertaking. It is also difficult to get from island to island, as they are separated from one another by 75-100 miles and shipping lines run infrequently. Travelers would also find currency difficult to master. Transactions under $5.00 (U.S.) are in Tuvaluan dollars, while those over $5.00 are in Australian dollars. Moreover, while Australian and Tuvaluan coins look remarkably similar, they are valued differently.

Tuvalu used to be best known to foreigners for its colorful and collectible commemorative postage stamps. Now, of course, it’s known (to those who even remember) as the nation that set the precedent of selling its Internet domain name. Federated States of Micronesia sold its domain name, .fm, for obviously similar reasons. But what would make a nation give up its Internet domain? After all, this is the 21st-century business equivalent of an individual giving up her or his family name — which really only happens in the case of marriage or adoption. Could it be that television and the Internet are just not that central to Tuvaluan life?

Well, television at least does not seem to be. Set ownership in Tuvalu is nine per one thousand people, and there are no television stations operating in the country (and only one radio station). Probably people are using the nation’s hundred or so sets for video recordings and/or satellite transmissions — though certainly not any indigenous programming. If not television, then what do Tuvaluans do in their spare time? At least one of their tastes in entertainment seem rather different from those of Americans (or most other nations, for that matter). As described on Tuvalu’s national web site:

“The national game is te ano (the ball). Two teams line up facing one another and competition begins with one member throwing the heavy ball toward the other team, who must hit it back with their hands. Points are scored if the opposite team lets the ball fall and the first team to reach 10 wins. The game ends with the losers performing a funny song and dance routine intended to bring the winners back to earth.”

This primitive-sounding sport is not the only pastime in Tuvalu these days, however. Tuvaluans appear to be spending more and more time online, with Internet usage poised to overtake television usage as the primary audio-visual medium. Telephone service only became available in Tuvalu in the late 1990s (and seems to have around 1,000 subscribers now), but Internet service was not far behind. Perhaps Tuvalu’s awkward geographic location has allowed the country to skip from the nineteenth century to the twenty-first in its media infrastructure. 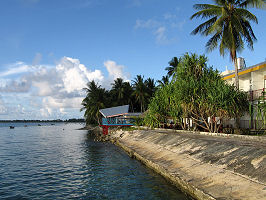 Maybe Tuvaluans feel that any Internet business they will need to do can be conducted via commercial servers with no significant sacrifice? After all, the sale of the domain name has afforded residents of the impoverished nation even to access the Internet (not to mention other benefits such as purchasing televisions and satellite dishes as well as international travel). Also, since the sale allowed continuing revenues from name sales within the domain, there will be a continued revenue stream. Could it be that the Tuvaluans’ decision to sell their assigned Internet domain was partly a symbolic one — with “dot teevee” being such an inappropriate descriptor for a society that effectively bypassed the heyday of television as a standalone medium???