Religious Tolerance versus Tolerance of Religion: A Critique of the Cartoon Controversy in Jyllands-Posten 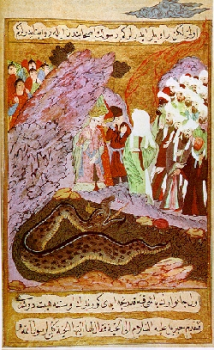 On September 17, 2005, a Danish newspaper Politiken published an article with the headline “Dyb angst for kritik af islam” (“Profound fear of criticism of Islam”). The article outlined the difficulties that a writer, Kåre Bluitgen, had faced in his attempts to find an illustrator to draw images of Prophet Muhammad for a children's book Koranen og profeten Muhammeds liv (“The Qur'an and the prophet Muhammad's life”). Three artists contacted by Bluitgen reportedly refused the project fearing attacks by Islamic extremists, while one artist agreed to work on the book anonymously.

Meanwhile, over at the now-infamous Jyllands-Posten, Fleming Rose, the cultural editor of the newspaper asked several cartoonists to submit drawings of the Prophet Mohammed in response to the Bluitgen episode. On September 30, 2005, Jyllands-Posten published 12 cartoons; some of which were extremely derogatory while others were self-reflexive attempts by the cartoonists to poke fun at themselves.[i]

Following the publication of the cartoons in Jyllands-Posten, some Muslim organizations in Denmark staged protests. Soon, the protests spread around the world as some or all of the cartoons were reprinted in newspapers, reported on television and displayed on the internet. While some protestors turned to violence, others staged non-violent protests to voice their concern about the cartoon controversy. In recent months, many news media outlets and media watchdog groups around the world have been extensively covering, debating and archiving media accounts of the cartoon controversy. For example, the online encyclopedia Wikipedia has an extensive archive of the controversy, along with various images of the prophet Muhammad in both historical and contemporary contexts.[ii]

The modern, secular society is rejected by some Muslims. They demand a special position, insisting on special consideration of their own religious feelings. It is incompatible with contemporary democracy and freedom of speech, where you must be ready to put up with insults, mockery and ridicule. It is certainly not always attractive and nice to look at, and it does not mean that religious feelings should be made fun of at any price, but that is of minor importance in the present context. […] we are on our way to a slippery slope where no-one can tell how the self-censorship will end. That is why Morgenavisen Jyllands-Posten has invited members of the Danish editorial cartoonists union to draw Muhammad as they see him.[iii]

An editorial statement is a fascinating media text in many ways. It is an illuminating window into the soul of a newspaper or a magazine, or a TV news channel, or a website, where editors fleetingly bare their sentiments even as they seek to mask such sentiments in claims of journalistic objectivity in news reports and analyses. Between the reasoned lines of political criticism and the impassioned plea for journalistic freedom, what finds voice in Jyllands-Posten's editorial statement is an ideological assertion that seeks to obfuscate the role of secularism in the history of modern nationalism and journalism.

Even if one were to concede Jyllands-Posten's claims that “the modern, secular society is rejected by some Muslims,” it does not negate the fact that there are many Muslims and non-Muslims alike who insist on making their religious sentiments compatible with “contemporary democracy and freedom of speech.” What is at stake here is not an arithmetic question of numerical superiority, but a political question of the dominant ideology governing journalistic sensibilities in a democracy. When he invited several Danish cartoonists to create pictorial representations of the prophet Muhammad, the cultural editor of Jyllands-Posten must surely have known that in Islam there is a long historical tradition of tolerance on the contentious issue of pictorial representations of the prophet Muhammad in religious and secular texts around the world.

Although the Qur'an prohibits idol worship, and some Islamic traditions do not permit any pictorial representations of the prophet Mohammad, many Muslim communities around the world have been tolerant on the issue of pictorial representation in different ways at different times in history. In contemporary times, for example, many Islamic scholars, clerics and believers have recognized the pervasive power of mass media, and advocated religious tolerance toward respectful representations of the prophet Muhammad in photographs, film, television and the internet.

Given this diversity of viewpoints in Islam, what prompted the cultural editor of Jyllands-Posten to marginalize the tolerant views of a majority of religious believers in the editorial commentary that, ironically enough, claims to rescue traditions of tolerance from the clutches of “some Muslims” who are intolerant extremists? The marginalization of the centuries-old traditions of religious tolerance in Islam, and the privileging of secularist ideologies in a project about pictorial representations of the prophet Muhammad, is rather troubling given the self-proclaimed bias towards secularism in Jyllands-Posten.

The history of the emergence of secularism as the dominant ideology in Western Europe has been extensively documented over the years. Here, I will only venture a brief recapitulation following the influential writings of the postcolonial critic Ashis Nandy.[iv] According to Nandy, the concept of secularism – the 19th century European ideal of a nation-state — is based on a mythology that “rejected religions and made science its deity.”[v] This European ideal of secularism demarcates a public domain of rational politics where religion is refused entry. Implicit in the ideology of secularism is the belief that statecraft and politics are rational sciences that can be universally implemented. Religion, being “irrational,” is seen a potential threat to the universal project of scientific nation-building.

Thus, when self-proclaimed secularists like Felmming Rose of Jyllands-Posten criticize “some Muslims” for claiming “special consideration of their own religious feelings,” they argue that the “irrationality” of religion must be kept out of the rational domain of politics in order to protect ideals of free speech and democracy. However, in their secularist attempts to rid politics of the “irrationality” of religion, Rose and Jyllands-Posten have, paradoxically, given greater voice to religious extremism both within Europe and around the world.

Capitalizing on the perceived threats of “Westernization” in the ideology of secularism, religious extremists in Islam have criticized the secularists for alienating people from their own religious traditions. The secularists on their part have assumed the mantle of protecting Islam against the onslaught of Islamic extremism, and manipulated religion as a political instrument to galvanize mainstream believers into their political formation. However, the editorial comments made by Rose for Jyllands-Posten clearly imply a confrontation between “us” (secularists) and “them” (Muslims).

In this confrontational framework, anyone who advocates greater role for Islamic traditions in the domain of politics is at once seen with suspicion. As is evident from Rose's editorial and subsequent statements,[vi] the self-proclaimed secularists at Jyllands-Posten do not acknowledge that Islam may have its own principles of tolerance and intolerance; because to do so would be to deny secularism “the right to be the ultimate reservoir of sanity and the ultimate arbiter among different religions and communities.”[vii]

In the inability and unwillingness to grant Islam its rightful place in the public domain of democratic debate lies, perhaps, the rationale for the cultural editor of Jyllands-Posten to represent principles of tolerance solely in the name of secularism.

In the secularist anxiety to rescue free speech in democracy from the threat of Islamic extremism, Jyllands-Posten does not acknowledge that Islam may also have something to say about traditions of religious tolerance as well. Therefore, I would argue that when the ideological apparatus journalism pressurizes believers of religious traditions to give up their faith without any assurance of protection from the zealotry of secularists and religious extremists, the ideology of secularism transforms into “a modern demonology … with a built-in code of violence.”[viii]

When powerful segments of mass media — and Jyllands-Posten is just one among many in our world today — uncritically accept the ideology of secularism, and grant it the sole authority to rescue religious believers from religious extremists, democratic choice is reduced to a crude caricature that is at best a pathetic ideological choice between two reified visions of “Islam” and the secular “West.”

As Nandy points out, tolerance that is religious is clearly distinct form both secular tolerance of religion and its ideological appropriation by religious extremism. Secularists must recognize that respect for the religious tolerance practiced by the vast majority of Muslims — in the “Islamic world” or call it what you may — requires an ability to honestly own up both the reasonable and unreasonable aspects of one's own traditions. The tragedy of modern nationalism in Europe — and perhaps elsewhere in the world — is that the ills of religious traditions are compared with the ideals of secularism, and the ills of secularism are attributed to the ideals of religious traditions.

In the coming years and decades, as academics, journalists, and politicians will continue to excavate political debris surrounding the cartoon controversy in Jylands-Posten, there will be many historical and political lessons to be learnt about religious tolerance, modern secularism, free speech and democracy. There is one journalistic lesson, however, that clearly emerges from editorial commentary of the cultural editor in Jylands-Posten. The lesson for journalists is to recognize that the objective of journalism in a democracy is not to delegitimize the concept of religious tolerance by recasting it as secular tolerance of religion. Instead, it would be a worthy goal for journalists to grapple — however clumsily — with the traditions of religious tolerance that the majority of Muslims practice in their everyday lives around the world.

To appropriate the religious tolerance of the Muslim majority in the name of modern-day theories of secularism – or for that matter against the name of modern-day ideologies of religious extremism — smacks of imperial arrogance rather than democratic sentiment. True democratic sentiment requires respecting religious tolerance of the Muslim majority of for what it is — religious, tolerant and in the majority.