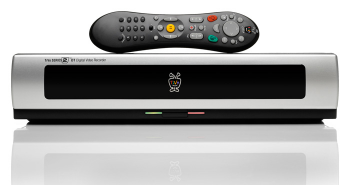 This winter, my family celebrated the fifth anniversary of two life-altering additions to our household – the birth of our first child and the purchase of TiVo. The celebration for my daughter turning five was certainly more notable than my casual reflection that we’d been a TiVo family for five years. But I often think about these two transformations as somehow linked, a simultaneous immersion into the chaos of parenthood tempered by the order of time-shifting.

Libraries have been filled on the life-changing impacts of having children, and the transformative potential of TiVo has occupied many column inches as well. But I haven’t read much on the connections between DVR technology and young children, a topic worth some consideration.1 So forgive me as I play into the stereotype of both parents and TiVo-owners – that we can’t talk about anything else! – and reflect on the significance of raising children in a time-shifted household.

For new parents, the power of TiVo is quite apparent. A baby’s schedule is far less regimented and predicable than the networks’, so most new parents are forced to sacrifice their dedication to their favorite shows for the immediate demands of a newborn. There is still plenty of time to watch television, as late-night nursing sessions and hours of baby-rocking welcome the company of a glowing screen, but being able to consistently choose these times becomes a rare luxury. So having a time-shifted menu of your favorite shows awaiting your attention is a parental pacifier.

When the baby grows into a little kid, TiVo’s advantages stretch across the family. We use the TiVo as a self-replenishing library of children’s programming, keeping a steady stream of new episodes of Blue’s Clues, Sesame Street, and Higglytown Heroes on demand. So while it may be easier to force a pre-schooler to follow the whims of the television schedule than a newborn, it is still far from ideal. Television’s best uses, both as a child development tool and parenting aid, shine through when you can control both what they watch and when they watch it, not having to choose between a program or a schedule. Personally, my buzzwords for children watching television are “moderation” and “age-appropriate” – goals well-served by the control offered by a DVR. Add the ability to fast-forward through commercials, and it’s hard for me to imagine raising kids without a DVR (assuming you don’t fall prey to the “TV-Free” propaganda).

All of this might just be another in a long line of rhapsodizing paeans to TiVo from a proselytizing early adopter (of technology, not children). But I’ve recently noticed more significant and interesting impacts of TiVo on my children. All of my daughter’s experiences with television have been via a DVR, and thus her entire frame of reference on the medium is shaped by a technology that is still on the fringes of American media – DVRs are only in approximately 7% of television households.

When my daughter asks “what shows are on?”, she is not referring to the TV schedule – rather she means what’s on the TiVo’s menu. For her, the transmission of television via a simultaneous schedule is an entirely foreign concept, even though this has been one of the defining elements of television as a medium for decades. She understands that sometimes certain shows aren’t available, but it’s not tied to a concept of how these programs get transmitted and recorded onto the TiVo.

When faced with the “normal” way to watch TV, she expresses understandable confusion. If I want to watch a football or baseball game in conflict with the normal “time for shows!” in our house – between 5:00-6:00 pm, giving tired parents a chance to cook dinner and chat in relative peace – she doesn’t understand why the timeliness of the game grants it precedence over her menu of programs. For her, all television is part of an ever changing menu of programming to be accessed at our convenience, not a steady stream of broadcasting to be tapped into at someone else’s convenience. (Of course, she also thinks of television as something that grownups study, teach, and write books about, so she might not be representative of most children.)

She also has little concept of channels – if programming is part of a personal menu, what does it matter if it came from Nickelodeon or Disney? She does, however, care a great deal about episode titles, an aspect of programming I don’t think I encountered until well into my twenties – since TiVo offers a title and description of each show it records, she regularly previews what a show will be about before watching it, and judges whether it’s new or an old favorite. Or sometimes she’ll reflect on the vintage of the episode, whether it’s a Steve or Joe Blue’s Clues, a Dora the Explorer with or without Diego. Clearly this is a different mode of consumption then my memories of flipping on the TV to see what cartoons were on.

Recently we had a family meeting to discuss revamping TiVo’s Season Passes for their daily diet of TV. Media literacy proponents talk about making media consumption a conscious and active process–what could be more active than a 5 and 2-year-old discussing whether they’d rather be watching Bob the Builder or Between the Lions? (For the record, Bob won, much to Daddy’s Muppet-philic chagrin.) Even if they’re not the offspring of a media scholar, children in a TiVo household are encouraged to think about what they’re watching and make active choices about their televisual taste and experiences in a way previous generations did not. 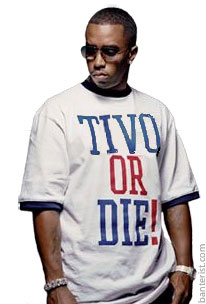 The absence of scheduling as a significant structuring element will leave some experiential gaps in my children’s televisual growth. As a kid, Saturday morning was an oasis of children-only pleasures, with wall-to-wall cartoons and sugared cereal ads that licensed laziness both for kids and their snoozing parents. Some networks have abandoned this strategy in recent years, but it’s hard to imagine children in a TiVo household embracing such a ritual when cartoons lose their scarcity and may be accessed on demand. Likewise, for me a snow day or being sick meant mornings lying on the couch watching a parade of game shows, since nothing else worth watching was on; if the TiVo is full of age-appropriate favorites, the game shows would quickly lose their appeal.

These gaps are clearly no great loss – I’d rather my kids watch things more appropriate to their ages and interests than just what happens to be on. But it’s easy when thinking about new technologies to focus on either their industrial impacts and strategies, or utopian potentials as part of a digitally converged future. These are certainly important, but we should also consider technology’s impact on the everyday lives of its users, and on the way technologies shape the way we think about those mundane, commonplace practices.

I teach my students that media technologies are shaped by the intersection of technological, institutional, and cultural forces, emerging with unpredictable uses and social impacts. It’s hard to imagine a better way of witnessing how new technologies are culturally consumed and shape our perception than watching a child learn how to use them. My oldest is just learning the ins and outs of the remote control – turning the set off and muting commercials while watching sports live – but it will be interesting to see how she takes control of the TiVo once she can fully operate the menu. I expect she will be navigating the technology quite differently than her parents, who clearly see it as an empowering interface to a more normal way of watching the flow of television. If DVRs become as ubiquitous as many believe they will, how will the TiVo generation view the media? If my household is any indication, television will be transformed, but not necessarily in predictable ways.

Both parenting and TiVo transform a household. Personally, we’ve found satisfaction in both, upgrading our family to three children. Our one TiVo remains an only child, occasionally begging for a sibling to allow it to grow, learn to talk to other devices, and walk about the house a bit. But for now, it awaits further discovery from a generation who will think it so odd that we ever needed to watch television according to someone else’s schedule and flow.

1 See this link for a TiVo user discussion on the topic, and here for a brief consideration from USA Today.