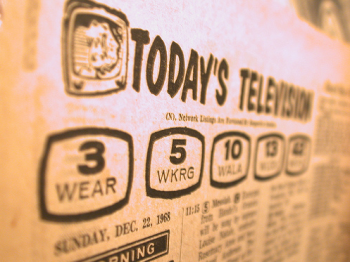 With Rerun Nation: How Repeats Invented American Television, FLOW contributor Derek Kompare introduced to critical discussion the previously submerged two-thirds of television programming, the repeat. Kompare looks at programming strategies and cultural meanings involved in the practice of re-showing old series. In furtherance of this subject, this column is the first of a two-part discussion of one fundamental aspect of repeat programming — the stripped series. Stripping a series means running a different episode every weekday, Monday through Friday, at the same time. Originally used in daytime slots, particularly in late afternoons to attract school-kids, stripping has spread to many other segments of the television schedule, from noontime to prime time and late night, as cable channels seek to profit from the popularity of old Big Three series. Are there special attractions for viewers related to stripping? How does watching a series on a daily basis change the viewing experience? Today I’ll discuss why some shows seem particularly well-suited to being stripped.

For many years, the industry maxim was that half-hour sitcoms were much more likely to be successes when stripped than hour-long dramas. Some noteworthy hour-long action series, however, seem to have attained new heights of popularity once shown on a daily basis. The Rockford Files in the 1980s and Law and Order in the 1990s were embraced more widely once in syndication than at the beginning of their original runs. The Rockford Files, after years of respectable but not great ratings, began generating buzz and critical acclaim at the tail end of its original run in the late 1970s, but secured its historical status with its emergence as a superstar of syndication, once it was placed on Monday through Friday rotation on local channels in late afternoons. Again, Law and Order was an unspectacular performer for NBC in its first seasons in prime time, but took off once it became ensconced in the A&E daily schedule. In each case, the series’ strengths came to the fore through daily viewing moreso than in weekly doses. Each was low-key in exhibiting its distinctiveness and benefited from the greater cumulative impact that daily exhibition provides.

The Rockford Files could be mistaken at first, and second, glance for just another generic Universal travelogue of the LA highway system, with the “zero degree style” that John Thornton Caldwell identified in Televisuality as dominant in 1970s action shows. With the opportunity for increased immersion into the text brought about by daily viewing, however, audiences could more easily pick up on the show’s qualities, from the above-average attention paid to the texture of the daily life of hero Jim Rockford, to the easy charms and interplay of series regulars James Garner and Noah Beery. The series boasted the most distinguished and influential writing staff of 1970s actioners, first headed by Roy Huggins (from The Fugitive and the great lost series Toma), then by Steven J. Cannell (Wiseguy and half the forgettable action shows of the 1980s), and included the future writers of Magnum PI, Remington Steele, and several other hits of the 1980s. Most notably, the staff included David Chase, who continues to cast Rockford players in Sopranos roles. The writers spiced the generic suspense plots with knowing cultural references and small character epiphanies, creating the template for so many of the detective shows that followed, but they did so with a light hand. The subtlety of the show’s strengths, and generally ungenerous amounts of attention-getting textual devices, made it easy to underappreciate the series when watched occasionally, or even weekly; the daily format brought these elements forward, without requiring a major increase in viewer attention to any particular episode. The series’ provision of quotidian detail and small grace notes of distinctiveness seemed just right for daily consumption, making The Rockford Files a great fit for the ritualistic and parasocial aspects of watching stripped franchises.

Law and Order has benefited from the same features of daily viewing practices. The series’ terse dialogue and understated but acute presentation of Big Apple social dynamics fit the aesthetic of good things doled out in small pieces within the texture of daily life. The current purveyor of Law and Order repeats, TNT, has made a fetish of the bite-sized pleasures of the show, highlighting isolated moments of each episode as “The Wisecrack,” etc. Obituaries of Jerry Orbach this year often made mention of audiences’ delight at his character’s offhanded one-line responses to the latest murder, a small feature that capped each episode’s introduction. The series’ notoriously fleeting glimpses into the regulars’ private lives rewards repeated viewing within the sped-up realm of stripped exhibition, and personal developments take on greater weight (and prompt greater viewer loyalty) than when viewer patience and memory have to be extended to the longer chronologies of weekly exhibition. Even the famously episodic Law and Order can gain some of the benefits of seriality when stripped, since the writers do include smatterings of narrative and character arcs. 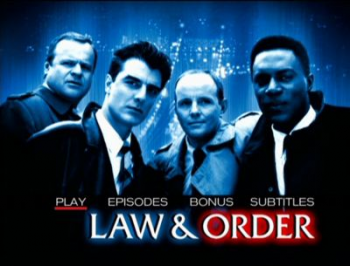 The syndication of the show followed the consolidation of the series’ most popular cast (Orbach, Noth, Hennessy) and allowed viewers who had missed earlier seasons to catch up once word of mouth began lauding the show, as happened with The Rockford Files.

The increased practice of running syndicated repeats before the end of a series’ original run, initiated to offset the huge debts incurred by production companies when they actually create a long-running series, can heighten the status of the currently produced episodes as well.

When Law and Order went to A&E, its importance on the televisual schedule was amplified, and the series was given greater weight as a significant show — if a show is good enough for old episodes to be shown along side of ongoing productions, it might be worth checking out, or of following more regularly. The simultaneity of exhibition also makes available the pleasures of comparing new episodes to old ones, of catching the introduction of previously established characters if missed initially, and of noting other past turning points in the production of the series. Stripping creates a history of a series less explicitly than does a DVD production replete with commentaries and extra features, but with greater suspense and, paradoxically, sometimes with a greater sense of fan involvement. It is up to us to construct a history out of the seemingly ahistorical practice of just watching plain, unaccessorized, individualized episodes. Law and Order‘s combination of rigid narrative formulae, quick wit, distinctive social commentary and memorable but limited performances seems well-suited to the ritual of daily viewing, when small gems discovered amid the detritus of daily existence attain their greatest luster and importance.

Part Two of this inquiry should arrive in February — wouldn’t it be better to be able to read it in the next issue? Or you could just wait until both pieces are archived, and then read them back-to-back — DIY stripping. Sometimes, the normal flow, and FLOW, is just too slow.