Micro-Ethnographies of the Screen: Flatworld 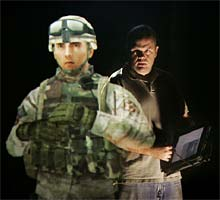 Jarrell Pair of the Institute for Creative Technologies stands behind Sgt. John Blackwell

Emerging from behind the singed black rubble of a factory wall, a ruggedly handsome infantryman outfitted with the latest in Army field gear flashes an all clear sign to our party of bemused observers. He lowers his rifle, smiles, and introduces himself as Sergeant Jon Blackwell. His movements are life-like, and he seems to glance about as he speaks to us. Our tour group is clustered before a translucent screen wedded to a large movie-style flat, a standalone, movable wall used on film sets. The screen itself approximates the height of a person. Facing us stands Blackwell, a resident of this life-size screen, rendered in an animated visual style evoking the characters one encounters during videogame play.

Our tour guide chats with the Sergeant using conversational banter designed to promote Flatworld – the immersive reality project within which the Blackwell pedagogical agent system represents an incremental step toward the goal of designing a fully interactive virtual human. Flatworld is one of several projects funded by the United States Army and being carried out by the Institute for Creative Technologies (ICT) at the University of Southern California in Los Angeles. If the screens of daily life – the video monitors that are embedded in the designed media ecology of the everyday world – are invisible through their ubiquity, ever-present through impression and instruction, then the movable interactive screens of the Flatworld Project are invisible through their status as advanced research. They are removed from public view as they are meant for the consumption of only those with a need to know – in this case military trainers and entertainment industry professionals (and those like myself who have been allowed to observe through an expressed interest in machine-human interaction). 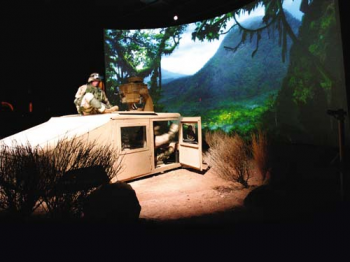 Everyday screens call to us. At a glance they entreat us to be particular people, to do particular things. I am confronted by a screen on a bank machine. It requests that I type in my PIN number and press enter. The trailer at the movie theater urges that I attend a screening of a film on opening day or soon thereafter. These are examples of the banal entreaties that bind the producer and the consumer during the myriad interactions that constitute a market economy. These screens subtly condition our identities. Implicit in screen-based transactions are forms of training regarding the world. They train us to behave in certain ways – summoning up a spark of thought not so distant from Althusser’s notion of the ideological state apparatus (without succumbing to the siren song of its most – let me emphasize “most” – sinister implications).

The Flatworld project stands at the intersection of two of the most powerful of societal institutions – the school and the military. The stated intention of the project is to create a human agent that can stand in for a human trainer. This interactive virtual human could be programmed to give instruction to new recruits as they prepare to enter actual combat situations. “Green” troops have the highest mortality rates on the battlefield as they move through the learning process necessitated by the life-threatening person-to-person, person-to-machine confrontations of combat. Each step involves a trial-and-error set of choices, each of which carries with it potentially extreme consequences. Whether one considers military action moral or immoral, the actuality for the soldiers in the field, regardless of their motivations for participating in battle, stands as a highly traumatic and disorienting experience. Interactive agent Jon Blackwell provides a new recruit with a human-like guide through participatory scenarios that will allow the recruit to make mistakes and walk away with knowledge, but without a bullet or shrapnel in the back.

Back at the tour, as Sergeant Blackwell jokes and interacts with our tour guide and responds to carefully phrased questions from selected tour members, it becomes obvious that Blackwell, at least in this version of the interactive virtual human scenario, is using a set of canned, scripted answers. Obviously, the intention of our audience’s interaction with this virtual human prototype is merely for the sake of publicity which side steps the hard-to-access actuality of a fully functional programmed avatar for military instruction. Blackwell shifts occasionally from side to side and gestures to us as he responds to questions ranging from the functionality of the flats that comprise the Flatworld simulation room to the voice recognition program that drives the real time interaction during training with virtual humans.

I glance about at the cavernous space of the warehouse that houses Flatworld. I notice two additional areas that are designated as models of Flatworld as it will come to be realized at some future date. One space approximates a shanty house with wall width screens representing a view looking out over the horizon of a war ravaged middle eastern city, while another space opens out onto an alleyway that at times harbors a swarthy enemy combatant and at other times a fellow soldier or civilian non-combatant. Should the new recruit shoot or offer a gesture of good will? This is the stuff of spy stories and cop shows, of course, replayed through countless television and film narratives of training for espionage and law enforcement (as well as representing the basic play structure for both first-person shooter games and even the much lauded Sims 2).

If one performs a web search for Flatworld, it seems that this project has been exhaustively written about by many newspapers and mentioned on numerous blogs, but if one is careful to read what has been written or produced about the ICT, most of the work closely follows the contours of a single ur-narrative, most likely the excellently produced publicity material generated by the ICT itself. Through whatever underlying intent, the ICT’s PR materials function to blur the militarism inherent in all of their projects, funded as they are by the US armed services, while emphasizing the gee-whiz wunder-tech aspects of each of the technologies embedded in each project. While the ICT screens have been exposed to the public-at-large through various media outlets, their projects still remain unseen by most, and what has been seen is always mediated by the filter of promotion designed to bathe each project in the glow of an aesthetics of videogames and movie special effects. (Both of which are, of course, influential in the visual and conceptual style of ICT projects and will in turn benefit from the research conducted at the ICT).

It is tempting, if one is sympathetic to the play of videogames such as Halo and Grand Theft Auto, to confirm this form of training new recruits as merely the next step in the use of simulation training by the military, a tradition that stretches back to at least the cold war world of the 1950s. Conversely, if one opposes the already overwhelming militarism of the current world picture and the ratcheting up of representational violence in media content, then this use of the videogame and special effect mentality can seem to be the latest step toward a scalding dystopia of programmed (in)humanity. Either way, one would be hard-pressed to deny that games like Halo and Grand Theft Auto present to their players a symbiotic relationship between violent character interaction, pulsing sound effects, and stylized graphic environments. And a modified form of this cultural form is exactly what the Flatworld military training simulation represents. Obviously, on the ground during combat it does matter whether the figure standing behind that door as it opens is friend or foe, but, in the world of screen technologies and their use in developing virtual interactive humans, is that binary – friend or foe, at base the most fundamental human interaction – the defining way to conceptualize relations between flesh-and-blood people and their programmed counterparts?

1. Jarrell Pair of the Institute for Creative Technologies stands behind Sgt. John Blackwell