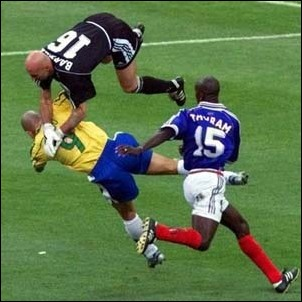 To be simultaneously a football fan and a critical academic is not easy. By ‘football’, I mean what Americans call ‘soccer’, which was originally an abbreviation of ‘Association Football’. It is what most people around the world call ‘football’. There are other games that call themselves ‘football’ but they do not really count, although what I have to say here largely applies to them as well. In the game that I am referring to, the player is not allowed to touch the ball by hand, that is, except for the goalkeeper, who is permitted to do so.

Why is it difficult for a critical academic to be a football fan? Well, for a start, there is so much to criticise. I know there are scholars of media and cultural studies who are not critically minded so this is not a problem for them. However, I am not one of their number. Frankly, I cannot see much point in what I do if it is not critical. There are plenty of other people outside academia actually employed to celebrate and promote prevailing media and cultural arrangements. They do not need my help. There are fewer of us in any case and we may be a dwindling band.

The difficulty here is greatly exacerbated by liking what you criticise. Perhaps ‘liking’ is too vague a word. ‘Addicted’ might be more appropriate. What is it that I like? The game itself, to be sure – I also like talking about it, perhaps even more so. Furthermore, I like listening to other people talking about it too: footballers, coaches and commentators as well as other fans. To tell you the truth, I do not much like listening to fans of other clubs than mine talking about their own teams. I do not mind so much listening to commentators talk about other clubs. I also listen to them talk about international football, especially the trials and tribulations of the England team having to face other countries that have the temerity to try and beat us. Yet, I do not generally regard myself as being particularly nationalistic or even patriotic.

Where do I listen to all this talk? On television, of course. In Britain, not unusually, there is a great deal of talk about football on television, including the older terrestrial channels and the newer Sky Sports channels, owned by Rupert Murdoch. One of these channels is almost entirely devoted to football but does not actually show any matches. Instead, it gives minute by minute reports on what is happening in football or, rather, what is being said about football. These reports are repeated endlessly with updates. Much of what is said, very often by retired footballers, about what is going on now is utterly banal, no more sophisticated than that which might be said by any reasonably competent football fan. However, when it comes to matches on other channels, Sky and terrestrial, the talk becomes very analytical. When Sky screens a live match, which it does several times a week, the programmes are usually twice as long as the match itself. There is an hour or so of talk about football before the match and, then, an hour or so afterwards. Clips are commented upon, coaches, fans and players are interviewed.

Sky and the BBC both have preview shows around Saturday lunchtime for the matches that afternoon. The BBC one recently featured Tony Blair, who spoke much more truthfully about football than he ever does about politics. Sky has a regular panel of ex-footballers who also watch the matches while they are being played on screens that we viewers cannot see; and they tell us about them. On Sundays there are discussion programmes on yesterday’s matches, one of them a breakfast session of journalists from the national newspapers talking about the issues, with them eating their breakfasts whilst pontificating. There is a great deal of talk about football on television. You can attend to it all day long if you want.

Why? Several years ago, Umberto Eco commented upon this kind of ‘sports chatter’ from an Italian perspective. He remarked, generally speaking ‘there exists only chatter about chatter about sport’. It consists of ‘evaluations, judgments, arguments, polemical remarks, denigrations, and paeans follow a verbal ritual, very complex but with simple and precise rules’. According to Eco, this was ‘the parody of political talk’. I think it is true that a great many men prefer to talk about sport and football, in particular, than about politics; quite a few women do so too, though most women usually talk about something else that is not to do with the world of official politics. It has often been remarked that people do not talk about politics because their say does not count and it’s boring anyway. As Jean Baudrillard observed, talking about politics is for the political class, not for the masses. It is ‘the evil genius of the masses’ to demonstrate their contempt for that remote discourse by being interested in and talking about something else that is much more entertaining.

However, this is troubling from the point of view of dialogic democracy. After all, if we do not talk, we do not participate. Instead, we talk about something like football. Football talk on television — and in ‘real life’ — displays all the features of a kind of dialogic democracy where everyone’s opinion counts and is violently disagreed with. Much of the talk is dialectical. People who know very little about politics and care less about it do know a lot about something else and they talk about it passionately in a keen spirit of debate. It is obvious to say, then, that football talk is not just idle chatter but, in some sense, a displacement of politics. Whether this is a safety valve or not is open to debate. No doubt it does not fully explain such fascination with sport and especially football, the pleasurable release and all that. However, it might go some way towards explaining why something that is so unimportant seems so important.