We Are So Screwed: Invasion TV 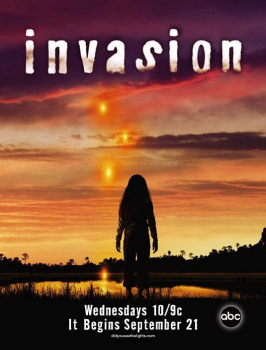 Fall network television schedules are among the most revelatory features of industrial cultural production. While they don’t provide a mirror to society, they do offer significant evidence of the industry’s conceptualization of society, or at least of the demographic and psychographic bits of society that it aims to attract. Accordingly, they’re not as much reflection as caricature. Even so, they do provide significant clues about the economic state of the industry and its players, the reputations of particular genres and producers, and, not inconsequentially, the state of televisual art. Well before actual episodes materialize in September, much can be gleaned.

By these standards, the most fascinating trend of the current season, starting when it was unveiled last spring, has been the plethora of series focusing on the supernatural. No less than five new dramas, on four of the six networks, center on episodic encounters with mysterious beings and forces; one of them is actually called Supernatural. Keeping in mind that the network track record of the supernatural, and science fiction in particular, has been generally dismal (despite recent successes like Smallville, Charmed, and Lost), the sudden presence of so many genre series certainly raises a few Vulcan eyebrows. As unlikely as this is, however, the fact that three of these shows represent an even more specific genre, alien invasion, is downright weird.

The critical and popular success of Lost and Desperate Housewives last season has been largely credited with the sudden interest in mystery-laden serials. While these series general influence on network executives and series developers is certainly clear, the question remains: three alien invasion series? The Hanso Foundation notwithstanding, the answer to that question actually owes more to two earlier breakout series, 24 and The X-Files, and their common thematic of apocalyptic threat.

Each of these shows presented dense worlds of secrets and threats, in which our protagonists are seemingly the only barrier between everyday life and Armageddon. Moreover, each also centered on a complex, dark federal government which functioned (often unpredictably) as both guardian and enemy. Aesthetically, each show offered a grim, doom-laden atmosphere of darkened rooms and grisly deaths. The X-Files, at its sparkling best a decade ago, balanced this otherwise unrelenting gravity with a buoyant joie de vivre, variously expressed through comedy, graphic horror, or both simultaneously. Conversely, 24 literally has no time for such side trips, and instead barrels along at white-knuckle speed, mesmerizing viewers with unrelenting action and suspense. While each has been highly regarded by critics and viewers for years, their impact on scheduling and production decisions has arguably never been greater than now. The missing factor until now in developing similar series, aside from the bolstering effect of the successes of the otherwise atypical Lost and Desperate Housewives, is the rising perception of national insecurity.

Insecurity is different than vulnerability. The latter implies blissful ignorance, while the former suggests grim resignation to fate. The national security theme of the past few years has (finally) been revealed as a political prop, albeit one with grave consequences. The Iraq War is a bloody stalemate, and its ramifications are felt across the globe in terrorist acts and military involvement. At the same time, evidence of government incompetence and corruption mounts (not only in the US), and innocents are routinely destroyed, with no remaining logic nor end in sight. Welcome to the post-post-9/11 world, where nothing is safe, and there’s not much you can do about it.

The manifestation of zeitgeist (to the extent that such a thing exists) on television is never quite straightforward, but it can be effective. Even if the timing is often a bit off (24 actually premiered just before 9/11, just as Invasion, despite the centrality of a hurricane to its plot, was produced before the impact of Katrina), it is still possible to connect the dots, to see how particular programming trends emerge, and occasionally, as is the case this year, erupt. Each of the three new alien invasion series — ABC’s Invasion, CBS’s Threshold, and NBC’s Surface — follows this thematic tunnel of national insecurity, upon which characters are pulled along by events well beyond their control, with no apparent light at the end.

The core of insecurity is the idea that nowhere is absolutely safe, that nobody is absolutely trustworthy. While this theme is certainly present in Surface, it is central in Invasion and Threshold. Accordingly, the alien menaces in these series are practically invisible. In Threshold, the aliens cleverly invade through telecommunications, wielding a broadcast signal that rewires human DNA, thus saving them the hassle of actually getting to Earth. The tell-tale clues about alien infection in Threshold are under the surface, as otherwise normal human beings dream about glass forests and have bursts of superhuman strength. In Invasion, the aliens don’t even give this much away. Aside from an odd fascination with water and the occasional paranoid glance, they look and act just like humans. The point in both of these shows is that the outside threat could come from within, just as in Cold War forebears like The Invaders, various episodes of The Outer Limits and The Twilight Zone, and, most famously, the 1956 film Invasion of the Body Snatchers. Body Snatchers’ protagonist Miles Bennell’s direct-address scream of they’re already here! would easily fit within either of these new series. 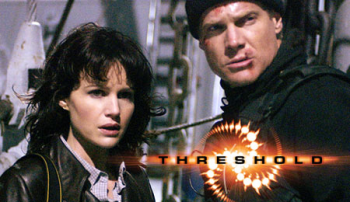 Importantly, these aliens aren’t simply a pastiche of familiar SF cliche they’re calculated to tap in to the zeitgeist. Once upon a time, the aliens of 1980s and 1990s space operas like Babylon 5, Farscape, and the Star Trek franchise, all bore their differences prominently in costuming and makeup in gaudy, yet genuine, attempts to convey multiculturalism (e.g., the standard varieties of head bumps on Trek aliens). The Narn, the Delvians, and the Cardassians were all different and difficult, but the idea was to figure out how to get along. In stark contrast, today’s aliens are hidden and secretive, and we’re no longer boldly going into the final frontier, but fearfully cocooned back at home, wondering where they are, and when (not if, as we’re often reminded) they’re coming to get us.

Moreover, even the idea of home is highly suspect in these series. All three (even the relatively lighter Surface) are set among dysfunctional families and militaristic governments, where military bases, schools, hospitals, and homes are as much trap as haven. In Invasion, the broken marriage of Russell and Mariel serves as the backdrop for an ongoing drama of awkward encounters, petty jealousies, and betrayals between their children, new spouses, and in-laws. The broken family here facilitates alien infiltration, infestation easily dovetailing into pre-existing suspicions. Meanwhile, the protagonists of Threshold have been forcibly removed from their families not by aliens, but by the US government, drafted into a secret war against a viral alien menace. The series highly secretive government agency is a neo-con War on Terror techno-fantasy, replete with scowling, no-nonsense operatives and a situation room eerily (and probably not ironically) reminiscent of the one in Dr. Strangelove. The government is ostensibly on our side, investigating alleged alien sightings and protecting us at all costs, even if that means trivialities like the law and civil rights must be pushed aside. The reluctant draftees sometimes raise questions of the legality and morality of their actions, only to have them dismissed with brazen cynicism.

Each series consistently applies its particular anxieties through appropriate aesthetics: Invasion gives us cramped close-ups and scenes of domestic destruction, Threshold provides jagged dream sequences and stealth technology, and Surface competently channels early 90s Spielberg and Cameron (and, oddly enough, the Star Trek film with the whales). However, they each also lack the key element that the best of their forebears had: reasons to keep watching. While many find 24‘s politics problematic (to say the least), they may still regularly watch for its sheer caffeine-rush energy. Similarly, even once you tired of The X-Files convoluted mythology, you could always relish its wit (if there’s a better episode of any 1990s hour-long series than “Jose Chung’s ‘From Outer Space’,” I’ve yet to see it). Even more recent series that plumb similar anxieties have done so with considerably more panache. Lost’s dense jigsaw puzzle experiment in serial narration, as is well-documented even here on Flow, continues to dazzle and perplex. Meanwhile, the must-see remake of Battlestar Galactica has singularly reinvented SF television with aesthetic verve, a continuously destabilizing narrative, and genuinely disturbing philosophical questions. In contrast, and unlike their respective alien invaders, Invasion and Threshold are exactly what they appear to be: formulaic concoctions with little energy. The formula may be new, and only now meaningful (or at least comprehensible), but it feels stale. Part of the problem in each is the unrelentingly dour atmosphere, which facilitates particularly wooden acting from most of the regulars. Indeed, Threshold is only marginally redeemed in this capacity by the performances of Peter Dinklage and Brent Spiner, whose grouchy scientists present the only apparent signs of life in the joyless government team, while Invasion is livened by Tyler Labine’s tinfoil-hat blogger Dave, who seemingly wandered in from My Name Is Earl.

Finally, in looking back on the merger of zeitgeist and programming strategy over the past several years, it’s worth noting the near disappearance of TV’s ultimate security blanket genre: the four-camera, studio-audience sitcom. Network television was filled with them as recently as the late 90s, but their only representatives now are well past their prime, unremarkable, or marginal. In a landscape of endless procedural crime dramas, cutthroat reality competitions, vengeful ghosts, and, yes, alien invasions, the idea of watching a half-dozen people hanging out and cracking jokes in the same living room, diner, or TV newsroom seems like a distant memory.

In other words, if the schedules are to be believed, insecurity is security.