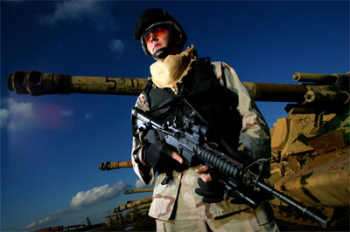 This here is a ’76 Chevy and somehow or other, it got stuck over here in Iraq, like the rest of us.
— Sergeant Ronald Jackson, Off to War

I’m giving up my whole life by being here.
— Sergeant Joe Betts, Off to War

On 26 October, U.S. military fatalities in Iraq reached the much-remarked “grim milestone” of 2,000. Television and other media commentaries noted the number’s historical significance and tried to situate it in a larger context, some noting the U.S. administration’s tone-deaf resolve concerning the country President Bush continues to call “the central front in our war on terror.” Just about a week later, FX decided “not to renew” the series Over There, citing its poor ratings performance, and, according to FX general manager John Landgraf, “our belief that the numbers were reflective of what the show is about, rather than its quality or entertainment value.”

If only the war could be cancelled for the same reasons.

But if the war goes on in Iraq, and Afghanistan, and any number of “secret” prisons around the globe, its tv representations remain underwhelming. Typically, the war appears as “numbers” — casualties from car bombs or IEDs, comparisons between months’ accumulations (October 2005 was the “fourth deadliest month” since the war’s start), troops moved from one location to another — graphics that skirt experience that might actually be horrifying for viewers or mobilize resistance to the war. As much as Cindy Sheehan or high school students or even Senate Democrats calling for closed door sessions find ways to make their protests visible on tv, the war itself remains strangely unseen.

This despite the fact that the Iraq war, even more than the Vietnam war or the Gulf war, is the tv war. The fundamental capacity for representing the “personal” and “intimate” experiences of this war is frankly remarkable, given the technologies available to troops and journalists. From blogs to cell phones to videophones, the war in Iraq is represented repeatedly, but for a relatively small, heavily invested audience: families keep in touch through email and internet discussion groups, reporters publish their work online or on non-U.S. outlets — Australian tv, the BBC, Al-Jazeera — so that those seeking data or images might find them.

Given all the potential venues, the lack of imagery — mainstream, incessant, harrowing — might seem surprising. Yes, the war is represented in any number of metaphorical and/or fictional ways: Afghanistan ground battles in E-Ring, the trauma of surviving veterans in Medium, the difficulties of “executive decisions” touched on in Commander in Chief, the fear of a relentlessly threatening environment and incompetent or malevolent authorities in Invasion, Lost, or Surface, and utterly brutal violence relegated to forensics series, from Bones and the CSIs to Killer Instinct and, in its way, Threshold. Meantime, the war as news, the war as tv in any explicit and so-named form, is rendered in brief, unspectacular, “daily installments.”

If few viewers will feel moved to mourning or outrage over the passing of Over There (whose soapy excesses were, as Landgraf suggests, “entertaining,” if nothing else), even fewer notice the war is appearing in a more or less coherent format in Off to War, on the cable network Discovery Times. Following the experiences of the Arkansas National Guard’s 39th Brigade, from Clarksville (pop. 7.719) to Iraq, the series, shot and directed by the brothers Craig and Brent Renoud, first emerged as what seemed a one-off documentary in April 2004. Released theatrically at the Tribeca Film Festival in May 2005, this first part — following only the brigade’s six months of training and first month in Iraq — earned generally positive reviews, specifically regarding its “raw” and “painful” images of troops in dangerous limbo, unsure of their mission and anxious about the disarray in which they leave their families (who are, in turn, unsupported by the military, the federal government or their private sector employers).

The next installments, airing under mainstream radar on Discovery Times beginning this October, are at once extraordinary and banal. The lives revealed are recognizable, sympathetic, even unspectacular. Except, of course, when the troops are fired on in Baghdad, or engage in their own shooting, shot in night vision, and muted black and white. Watching the presidential debates of 2004, the exceedingly young-seeming Specialist Tommy Erp, home on leave, can’t help himself. When President Bush insists that “the world is safer without Saddam Hussein,” Erp speaks to the documentary camera, as his mother sits quietly, her eyes resolutely trained on the television, not her son or the camera. “We’ve got no army that we’re fighting, we’ve got no causes that we’re fighting, we’re just getting killed for no reason.”

Off to War presents such exclamations of frustration as a matter of course, without sensational framing and alongside the declaration that everyone’s better off that Kerry has not been elected. But the expressions of irritation increasing as the series goes on — from October 2003, when the Renaud brothers arrived to film the unit’s training at Fort Hood in Texas (where the Army employs Iraqi and Kurdish American actors to simulate “actual war conditions”), through November 2004, when the bulk of the 39th remains in Iraq for Thanksgiving — as the mission becomes more unknowable, as the terms of deployment are extended, and as the local resentment of the U.S. occupation becomes unavoidably clear. Initially assigned to Camp Taji, renamed Camp Cook, the troops are at first both philosophical and understandably worried. “If the tables were turned and they invaded Arkansas,” goes the prevailing logic, the guys would be just as resentful as the Iraqis appear. And so, the Guardsmen make valiant efforts to show patience, as the local kids offer to sell them “sex movies” and cds and the camera moves in close on the troops’ exasperated faces. 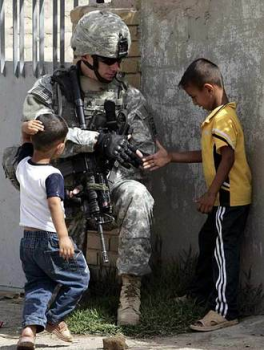 The “characters” of the 39th are as compelling as any reality game show participant. This has mostly to do with their diurnal routines, that is, staying alive: “We’re getting mortared twice a day,” says Sergeant Joe Betts, gazing out into a dusty nowhere. Sergeant First Class David Short, framed in tight closeup even as his uniform and helmet make him nearly unrecognizable, instructs his men to wear their body armor, “24 hours a day, seven days a week. Whatever it takes to keep you guys alive, I’m willing to do. All hell has broken loose and it’s right outside that gate.”

Some subjects perform themselves knowingly, as wise guy observers. Specialist Matt Hertlein observes Iraqis at work: “Today is a good day because the National Guard doesn’t have to fill sandbags today.” Tommy Erp takes his digital camcorder around to make a tape to send home, pointing out “our home,” a trailer park that makes everyone feel like they’re back in Arkansas. Here we are, he narrates, engaging in typical activities to make them feel at home, “cigar-smoking and joking.”

Hertlein sits down to eat in the mess hall, assuring his presumed audience, “Mom, I know these potatoes aren’t gonna be as good as yours because they’re instant.” He instructs his little sister Megan never to join the Army: “Stay in school,” he says as the image cuts back to the family watching the tape back home, Megan laughing when Matt calls her name, “We’ll pay for you to stay in school.” And here, says Matt, holding up a carton of cigarettes for his camera, are his “Haji smokes.” He explains that a Haji is “a person who makes a pilgrimage to Mecca, but we kinda use it as a racist term.”

Such self-awareness and cynicism seem almost odd voiced by this sunburned kid, but this is the sort of conflicted, resilient self-understanding that Off to War reveals repeatedly. While the soldiers note their injunction not to speak about “anything political” in public (say, during an appearance at the local high school), in country they tend to say what’s on their minds. “What we’re supposed to be doing here is Security and Stability Operations,” says one sergeant. “But we basically have just tossed that right out the window. There’s no security here and no stability here. It’s basically a full-fledged very hot combat zone.” They argue over Abu Ghraib (“This is exactly why the Iraqi people stay pissed off at us”), they complain about being spit at. When they learn another unit has opened fire on a boy who pulled out a cigarette lighter shaped like a gun, leaving three Iraqis dead, the response is practical and weary. “People are gonna be pissed off,” notes a soldier. “It’s unfortunate, but they gotta know that we’re serious about this.” That is, you can’t be pulling out lighters at troops and thinking you’ll survive the encounter.

Sergeant David Short explains his own attitude to the camera, hunkered down in his helmet and goggles:

Back home, Off to War’s subjects seem more constrained to appear “upbeat, despite the fact that their troubles are profound — bills unpaid, kids depressed, women lonely and fretful. As Amy Betts puts it, rather perfectly, “The hardest part was when he actually got in Iraq. I quit watching the news completely because I just can’t handle it.” An injured vet is hospitalized for repeated surgeries, his wife noting his “new jaw,” and the rods needed to hold his legs together. When Betts — an ordained pastor — is sent home for three months owing to a back injury, he observes that it probably saved his marriage, which has indeed appeared rocky during phone calls with Amy. The series shows Hertlein’s sister Megan playing softball, his grandmother in attendance. She smiles gently, sits deep in her lawn chair. “We can’t help but be proud of Matt,” she says slowly, “We don’t want him over there, we don’t exactly understand why they’re over there, but we’re proud of him.”

What’s most striking, perhaps, is the way the troops make connections between home and the war, make sense of their new lives because they must. Hertlein jokes, sort of, that he’s about to go out an “interact wit the locals. Hopefully, they won’t throw any rocks at me because if they do, I brought plenty of ammo,” at which point the camera cocks down to show his handful of stones. As a truck load of Iraqis drives by, all yelling and gesturing, Hertlein sighs, “It’s like being in Clarksville where all the Mexicans live at… You can’t understand a word they’re saying.” And with that, he resituates himself and his fellows: “Invading a foreign country and threatening its people: what could be better?”

Unheralded, largely unseen, Off to War shows the war in and against Iraq as a function of images and preconceptions, as the troops bring their prejudices, desires, and hopes. But it also shows, in a more nuanced and disquieting way — for those paying attention — the ways that war is waged by repression and reframing as much as it is by aggression. Engaging and disturbing, Off to War is hardly a whole story, for anyone. But it is one of the many ways that the war is represented and contained.