When Mullahs Ride the Airwaves: Muslim Televangelists and the Saudi Connection 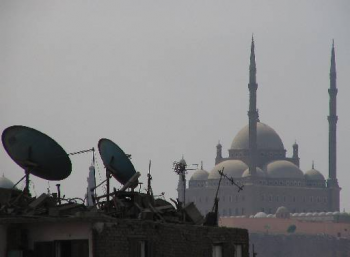 “Soccer is not an illicit form of entertainment, but when practiced in violation of shariah, then it is as abhorrent as any other sin…. When we fanatically love non-Muslim players who perform the sign of the cross upon entering or leaving the field…or when Muslim players imitate the pagan dance of famous infidel players when they score, or put forbidden things on their chests, that’s not acceptable.” The author of this soccer fatwa is Saudi cleric Muhammad Al-Munajid on a set of Islam’s powerful spokeschannel, Iqra’ TV.

Until recently sheikhs like Al-Munajid were only able to reach their audience through audio and video recordings sold on Arab black street markets. Those who preached a rigorous interpretation of Islam had a minimal impact among fringe groups of Arab populations, but as satellite technology becomes greatly appealing to the religious and the secular alike, television channels with a strict religious message as Iqra’ are quickly setting shop. Inaugurated in 1998, Iqra’ is Saudi Arabia’s most recent and probably most effective campaign of spreading its Wahhabi doctrine, which the channel’s producers temper by saying on their website that their mission is to bring “the teachings of Islam into the homes and hearts of Arabs worldwide.” The Saudis take issue with the Wahhabi label because it makes them look less as the real Islam and more like a sect that is highly disputed in some respectable religious circles. But the systematic indoctrination of imams and financing of religious schools and mosques around the world reveal a rigid reading of Islam which forbids close interaction with non-Muslims and calls for the literal application of shariah laws across the region, including hand amputation for theft, sword beheading for capital crimes, and denying women any role in public life.

For years, Saudi Arabia had to flaunt its generosity towards poor Muslim countries by building hospitals, schools, universities and mosques even in Western Europe and the United States. According to Saudi officials, between 1975 and 2002, the Riyadh government spent more than $70 billion on Islamic projects around the world, excluding the millions of dollars volunteered by Saudi charity foundations and unidentified philanthropists. An estimated 80 percent of mosques in the U.S. are funded by Saudi Arabia, according to Sheik Muhammad Hisham Kabbani, head of the Islamic Supreme Council of America. While the funding of mosques and the ideological direction of those who frequent them do not necessarily correlate, the influence of the Saudis over the content of the sermons, the training of imams, and the substance of Islamic schools’ curricula is undeniable.

Religious spending per se is not the problem here, but it is the extremist ideology promoted thanks to this cash availability that is disturbing. The voices of intransigent Islam are featured frequently on the airwaves of Iqra’, and their edicts are often consistent with the Wahhabi attempt to purge Islam of what is perceived as foreign threat disguised as societal change. In fact, some of the messages on the channel can be extreme like Saudi cleric Aed Al-Qarni’s recent on-the-air endorsement of suicide bombing. “Houses and young men must be sacrificed,” he says, “Throats must be slit and skulls must be shattered. This is the road to victory and to shahada (sacrifice). Oh brothers, the idolatrous Vietnamese, Cambodians, and South Africans….Nations with no calling or divine law make sacrifices–sacrificing people, blood, and souls. All the more so should we, the nation of Islam.” And some show moderators often appear as enlightened by their guests’ revelations as when Egyptian historian, Zaynab Abdel Aziz tells a show host that the “Vatican delegated the US to carry out 9/11.”

While religious platforms such as Iqra’ do not call for jihad bluntly, theycontribute to an increasingly radicalized religious culture in the Arab world, making every facet of social, cultural, and economic life a religious issue in need of a fatwa. Fatwas range from Muslim women needing to comply with their husbands’ desire in bed even if they don’t want to, to why hands of stealers should be chopped, to whether Muslims should shake hands with Jews. Iqra’ (literally: “recite” or “read in an
intelligent way”), has found a fertile ground in a region still lacking basic political reforms and jaded with repetitious autocratic and corrupt regimes. For years, religious groups–mostly underground–in the Arab world have become the only viable alternative: when the health
system fails customarily in these countries, Islamic groups with disposable cash can intervene with their own doctors for free; when schools educate poorly, the same groups offer their own teachers for free. In the wake of natural disasters like floods and earthquakes, religious groups often respond quickly and more efficiently than governments to help the victims and alleviate their losses, as was the case in the earthquakes of Algeria and last year’s floods of northeastern Morocco. The failure of secular regimes to provide minimum social welfare and secure political freedom in the region has steadily nurtured a new perception whereby the state benefits the elite while religion benefits the masses.

This is why the world of Arab media seems swamped with religious messages, but by now, Arabs have evolved since the state-owned, everything-is-fine, and dull television channels. So, in order to appeal to a more media saturated audience, the producers of Iqra’ are taunting their skills by making religious preaching less shabby and threatening. The on-screen graphics and studio sets are comparable to entertainment television, but nothing is more alluring than the new look of Islamic scholars and sheikhs who do not always conform to the conventional image of a preacher in a mosque. In fact, many of these preachers and scholars wear suits and use softer tones than usual. Some of them are young and do not claim to be a religious authority like the channel’s superstar preacher, Amr Khaled, a 38-year-old who hosts one of the most popular programs on Arab television, Sunaa al Hayat (Life Makers).

Khaled, who has become a household name across the Arab world, is seemingly an anomaly in the Saudi quest to popularize Wahhabism: he is young, a business accountant not a religious scholar, and with a somewhat liberal and tolerant approach to Islamic preaching. Khaled’s fame at Iqra’ was preceded by a long showdown with Egyptian authorities who expelled him from Egypt after his religious lectures had become spiritual revelations for thousands of well-to-do women and youth in the country. His age, modern look (wearing jeans or a suit and clean-shaven), and the use of colloquial Arabic make him accessible to a young Arab audience extremely tired of the staid, disconnected sheikhs of Islam. But what made Khaled’s message appealing to the Saudi channel Iqra’; is that it is liberal only in style and quite conservative in substance. During his lectures and discussions on the hijab, Khaled is rarely original in citing the reasons why Muslim women should be veiled. Women are the pillars of Islamic education and wearing the veil, he says, is a selfless gesture to protect the sanctity of the faith itself: “I think that the primary purpose of legislating hijab, other than preservation of virtue, is…to remind people in the street about Islam; there will be no way better than hijab.” Islam’s integrity, he says on his show, depends on the virtue of its women and since their responsibility in the temptation of men is inevitable, veiling is a must, even if you don’t understand. While Khaled’s message lacks in originality and critical quality, his highly emotional, talk-show style provides an innovative and soothing statement that you can be pious and still remain modern and cool. And the Amr Khaled phenomenon has just begun despite some already unprecedented television ratings for his show: five million viewers tune in to his weekly show and his web site records millions of hits daily.

By putting Khaled next to the old and conventional sheikhs, Iqra’s producers are hoping to change the moral path of young Arabs who are still deeply influenced by Western popular culture. Major Internet chat rooms in the region are teeming with testimonies, particularly of young women thanking Khaled for convincing them to put on the veil. Programming this year included not only talk shows and lectures, but dramas and cartoons. It is hard to quantify the impact of Khaled’s hip preaching and Iqra’s religious broadcasting, but religion has never been this popular from Cairo to Casablanca. At a time when political regimes in the region continuously fail their constituency and Islam is the subject of humiliating headlines, Khaled and a wave of young preachers seem not only innovative, but also vengeful in a let’s-go-back-to-the-roots fashion. It is therefore not a surprise to find Saudi Arabia at the helm of this religious survival in disguise. Though Wahhabism may never become a preferred doctrine of Muslim Arabs, its signature of uncritical, exclusionary spirituality is quickly infiltrating Arab living rooms and delaying badly needed reforms both in religious interpretations and political rule.

The 30-year-old executive manager of Iqra’, Mohammad Hammam, likes to think of his channel as serving a double mission: counter the post-September 11 image of Islam and guide Muslims to understand better their own religion. Many of the ideas propagated from the sets of the channel, however, belie the core of this mission. If there is one, it seems to be to flood the airwaves with a fatigued interpretation of religion simply refurbished with funky jingles and beardless preachers.