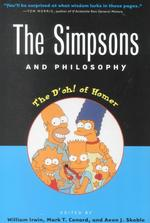 The D’Oh! of Homer

Unless you’ve been living under a rock the past four years, you’ve no doubt seen or heard of the Popular Culture and Philosophy books published by Open Court. Titles such as The Simpsons and Philosophy: The D’oh! of Homer, Buffy the Vampire Slayer and Philosophy: Fear and Trembling in Sunnydale, and The Lord of the Rings and Philosophy: One Book to Rule Them All litter the shelves of local bookstores, where they can apparently be purchased in bulk. Turns out that popular culture is — well, “popular” — with young people. Philosophy? Not so much. But the Popular Culture and Philosophy books have managed to bridge this gap by exploiting the commercial success of recent cultural artifacts and releasing a new title dedicated to that artifact every couple of weeks.

Indeed, one might compellingly argue that the books themselves have become a popular cultural phenomenon. In the unselfish interest of bringing philosophy to even more young people, this book examines the philosophical importance of the Popular Culture and Philosophy books. Specifically, it suggests that their importance is “not much.” Like the fleeting character of the texts to which they pay tribute, these books will not have a lasting influence on philosophy. But in the meantime, there’s profit to be made. So, without further delay, let us examine these books before they, too, become passe.

Chapter 1: Plato: Philosophical Whore or Does This Guy Really Just Apply to Everything?
By Richard Fish, Assistant Professor of Philosophy, McBeal State University

Plato was a hip-cat who lived a long, long time ago. In his writings, which mainly took the form of dialogues, he pursued the notion of “the good,” which was rooted in his theory of forms. This theory proposed the existence of ideal, moral forms that were absolute and eternal. They were also conveniently accessible only to Philosopher-Kings, who were especially knowledgeable. Everyone else essentially lived their lives in a cave, albeit an allegorical cave. In perhaps his most famous work, The Republic, Plato suggests that most people are chained deep in the cave, where they see mere shadows of the “real” world projected onto the walls by the sunlight of the true world outside. This allegory is useful for thinking about the Popular Culture and Philosophy books, which feature shadow philosophy (i.e., poor approximations of real philosophy). So, yes, if you ascribe to perfect forms, Plato can apply to everything. 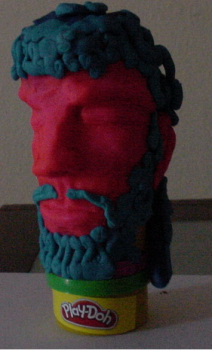 With his famous claim that the “Mind is the law-giver to nature,” Immanuel Kant married empiricist and rationalist views of knowledge, suggesting that knowledge was a composite of both sensory experience and the structures of the rational mind. Simply put, indeed overly simply put, the object is, according to Kant, inevitably created to some extent by the subject. Thus, if we take as the object of our investigation the Popular Culture and Philosophy books, sensorily we are dealing with printed text on paper. But this printed text is meaningful only to the extent that the faculty of the human mind supplies it with form. This chapter argues that that form is perhaps best labeled, “philosophy as entertainment.” By severely bastardizing Kantian philosophy, we can rationally conclude that Popular Culture and Philosophy books are “pure fun” and that fans of popular culture will buy anything that mentions what they’re fans of.

Adopting the perspective of historical materialism, Karl Marx argued that the underlying conditions, forces, and relations of production shape the superstructure of ideas in society. In other words, the economic base or foundation in any given society conditions the realm of culture. To understand specific elements of culture, then, such as the Popular Culture and Philosophy books, we must examine the modes of production. These books — with their flashy covers and populist promotions, targeting of mass tastes, standardized, formulaic content, and relentless release — reflect a capitalistic profit-motive. As such, these books reproduce the economic interests of the ruling class, thereby exploiting and enslaving the working class of readers. Fortunately, according to Marx, the oppressed class will at some point rise up, stop buying these books, and will determine their own modes of production and thus forms of thought.

In Philosophy and the Mirror of Nature, Richard Rorty critiques the tradition of foundationalist, metaphysical philosophy, arguing that far from being absolute and universal, knowledge is local, constructed, and contingent. For Rorty, a philosophy without mirrors begins with the recognition that philosophers possess no special method for accurately representing reality. In this chapter, I contend that the authors of the Popular Culture and Philosophy books posses no special method for accurately representing the reality of popular cultural representations of reality. What they do possess is a shared disinterest in the communication technologies they analyze. Apparently, the fact that television shows are actually televised has no bearing on their philosophical messages. This chapter infuses the books in this series with deep philosophical meanings, while ignoring their status as literature targeted to a mass audience.

While many scholars have declared the failure of Enlightenment reason, others such as J. Habermas have defended the project of modernity, claiming that intersubjective recognition and mutual understanding through communication can still lead to emancipation (i.e., egalitarian politics). For this to happen, however, the systematic impediments to understanding must be demolished. Informed by the Frankfurt critique of the “culture industry,” Habermas argues that the mass media is chief among these impediments, for it leads to passivity. Thus, mass media or popular culture such as the Popular Culture and Philosophy books impedes the development of an alternative, progressive public sphere by making readers the passive recipients of commercial philosophical messages. This chapter contends that Habermas would urge serious political and philosophical conversation outside of popular culture.

Philosopher Jean-Francois Lyotard is perhaps best known for his definition of the postmodern as “incredulity toward metanarratives.” A metanarrative, according to Lyotard, is simply a story that provides a credible purpose for action. In the postmodern condition, however, such stories and the grand narratives they legitimate have lost credulity because of the recognition that they lack any universal basis for grounding their claims. Social institutions, then, are constructed on little more than language games or self-legitimating discourses that follow internal rules. Drawing on Lyotard, this chapter examines the language game of tenure, and explores how the rules of this language game have been rewritten by philosophers to legitimate chapters in the Popular Culture and Philosophy book series as serious scholarship.

Forthcoming Titles in the Popular Culture and Philosophy Series from Open Court:

Maxim and Philosophy: Being and Toplessness

T-Shirts with Pithy Sayings and Philosophy: Hemlock Is So Last Season