In two recent columns in Flow (“The Loss of Value (or the Value of Lost)” and “The Value of Lost Part II”), Jason Mittell has argued with some vehemence that “Lost is the best show on American broadcast TV.” The claim seems puzzling on several levels, despite the fact that Lost is certainly a very well-made and provocative program that many viewers, myself included, find extremely compelling. Is there an objective, or even interesting, sense in which one can claim that one program or the other is “the best”? What exactly does it mean for a TV program, or another cultural object, to be “the best,” or even “aesthetically good”?

Debates on issues like this are so familiar within the realm of cultural criticism, which I take to be the main goal of Flow, that I find it surprising to have them so decontextualized. So many of the theorists we read even in introductory Media Studies classes show the problems with trying to make such judgments outside of their cultural contexts; surely it is a part of the cutural criticism of media itself to become familiar with the ways that canons of taste reflect the social, political and cultural norms of the societies and persons who produce them. Rather than arguing about which objects do or do not meet certain standards of taste, I understand the task of cultural criticism to be to explicate why certain kinds of aesthetic principles resonate with the cultures in which they are embedded. In this sense it is surprising that Mittell (and by extension Flow itself, and also its readers, including those who have commented on Mittell’s articles) think the question of whether Lost is the best program or not is a question for the cultural criticism of television. It is especially surprising given Allison McCracken’s earlier essay on other programs that hints at why the logics on display in Lost (“Lost“) might be so relevant to our own cultural situation, and on which the following analysis builds.

In particular, as a response to the enormous wave of reality television programs over the past few years, Lost restages the “lost in the unknown wilderness” narrative that is primary to the West (especially via the Robinson Crusoe story) and primary to much serial television (Gilligan’s Island, The Prisoner, Lost in Space, Star Trek: Voyager), and also seemingly primary in reality TV, via the one-character-“dies-“-each-week structure popularized in Survivor and maintained in many other reality TV shows.

Lost recapitulates all of these formulae while explicitly scripting its characters’ interactions, thus foregrounding exactly the process that in reality TV is controversial, often hidden, sometimes absent. At the same time, the show is organized around a central mystery, the “purpose” of the island (and a number of associated mysteries including the “identity of the monster,” “connection of all the central characters,” “nature of the plane crash,” etc.).

In structuring an ongoing serial television program around both the promise of main-character “death” and a single primary mystery, producers face a dilemma rarely faced by novelists and filmmakers. Media that usually have a concrete ending point (novels, movies, hour-long police dramas, even many video games) can sustain and then resolve a mystery in a more-or-less satisfying manner. But when a single central mystery is made structural to the show’s premise, it becomes almost impossible to reveal the mystery without undoing the show itself. This structure creates tension, and because of that, the core mystery, as a kind of Hitchcockian MacGuffin, ends up having very little content itself, and becomes more like a metonym of the show’s popularity (the more popular the show is, the more pressure there is to “reveal” very little of the mystery so as to keep the premise intact).

Instead of the mystery, in fact, the show focuses on character and background, but then, due to the Survivor structure, these character stories also exist in metonymic relation to the actors’ roles on the show, and to the show’s popularity. The more successful the show is, the less about the characters can be “definitively” said, and against the Survivor structure, the more pressure there will be not to kill off the main characters, since these figures are tied at least as directly to capital as are their reality-TV counterparts. When a single actual character from the show (Boone) was killed during the first season, stories were published in popular magazines outlining the actor’s grief at losing his role.

Thus in the season finale, although the death one or more major characters and the revelation of a major mystery were teased to viewers repetitively, they were also not on offer. Instead, viewers of the season finale experienced little drama and an apparently unexpected and formalized recapitulation of the show’s premise. Many of the season’s apparently central mysteries were teased in slow-motion chase sequences, miming our own mechanical implication in the media circuit. But unlike in Survivor, it was a new character, much like a Star Trek “red shirt,” who was to be sacrificed, rather than any continuing member of the cast. The new character, Artz, was introduced two episodes prior to the finale as a helper for Michael as he is building the raft. 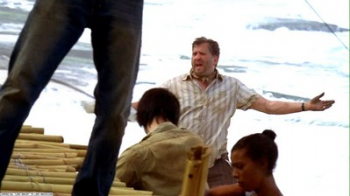 Figure 1. Artz in the scene from episode 22 where he is introduced

In the finale, Artz insists on coming with the main characters on a search for dynamite, despite the lack of dramatic reason for him to go, and thus threatening the program’s characterological set-up. Suggestively, Artz’s dialogue during these scenes focuses on exactly two areas: first, that dynamite itself is very dangerous and can go off unexpectedly, and second, that everything on the island seems focused on the main characters like Hurley (to whom Artz speaks these lines) who are like the popular kids in high school. No other character talks about the dangers in dynamite, and no other character is harmed by it. No other character speaks about the strange dramatic setting of the show, and the improbabilities the show sustains in order to work its synthetic action. This is the first new character to be introduced to the main group since the beginning, and it would be far too obvious to introduce such a character just to kill him off so obvious in fact that there would be little dramatic tension in actually killing him off.But Artz blows up while handling dynamite in the first half-hour of the two-hour finale, thus immediately reassuring viewers that no member of the core cast will be killed off and failing to live up to the true Survivor promise.

By pointing out that Hurley has lost no weight in their months of privation, Artz briefly occupies the ego world that sees that this journey leads nowhere. We are supposed to be relieved that no main character has died, and yet in this scenario Lost shows that it depends precisely on revealing nothing of its mystery, since its mystery must remain mysterious, since the show must remain the show, despite the repeated promise to show us more. The longest extended sequence during the finale shows the main characters assembling on Flight 815 (the flight that lands them on the island in the first place), but instead of ending in drama this sequence ends in stasis, showing the characters in their seats and ready for takeoff. Some viewers report seeing a tentacle enveloping John Locke’s leg as he is pulled down a hole in the ground by the show’s “monster,” and a fog of smoke contains traces of what look like the most familiar of SF devices, the intelligent cloud of nanobots, perhaps also present in the show’s pilot. 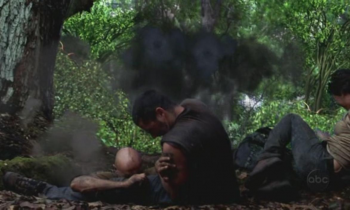 Figure 2. Black smoke that appears to have “eyes” or a “face” in it.

Lost dramatizes exactly its own scripted coming-into-being, the very process of its writers and producers crafting a suture that we viewers must engage with and submit to, gluing the stand-ins of the main characters’ life histories (the true dramatic content of most episodes) to the real-time reality-TV-like mystery story supposedly at the series’ heart.

The dynamite that killed Artz is finally used at the end of the episode to open the hatch, over Hurley’s objection, that is, over the objection of the character whose presence has now been marked out precisely as the one that shows that there is no island, no journey, no mystery at all. “Don’t open the hatch! The numbers! They’re evil!” Hurley runs and cries, perhaps thinking of Nielsen as much as Lost‘s cryptic numeric sequence, but they blow open the hatch, revealing the mise-en-abyme that is in fact the show’s premise, the thing the show shares with we its viewers. We are on a journey, pursuing an empty object, a desire we do not understand. 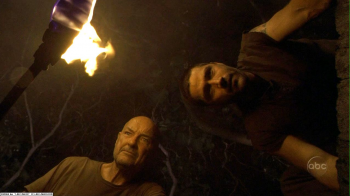 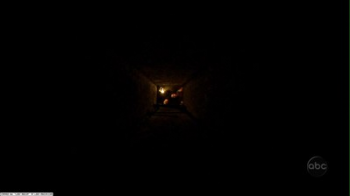 We suspect there is safety, knowledge, insight down there, even though we know that all that is down there must be structured precisely by our own desires. We can only look down into the void that we have created for ourselves. Who are we, that we find such an obviously aporetic narrative, one that mimics the commercial structure of contemporary television itself, so profoundly compelling?

1. Figure 1. Artz in the scene from episode 22 where he is introduced