I Love Lucy in the Sixties 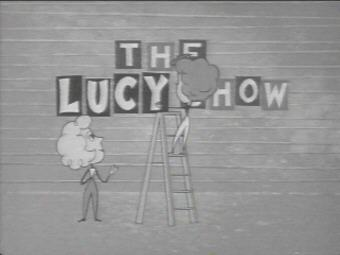 My grandmother had made it clear that she wanted the items on her shopping list soon, as in the next day. It was 10:00 at night, in Biddeford, Maine, and where the hell was I going to find Jarlsberg cheese, a small watering can, skirt hangers, Danish butter cookies, Miracle Grow, peanut butter, Stayfree maxipads (extra-long, with “wings”), and bedroom slippers? I boarded Grandma’s boat-sized 1991 Lincoln Town Car and headed towards my inevitable, unenviable destination: Wal-Mart.

Entering the frigid belly of the consumerist beast, I meekly wondered, as long as I’m here, maybe I could pick up a copy of the South Park anti-Wal-Mart episode? So after getting my assigned shopping done, I decided to check out the DVD department. It turns out that DVDs are a loss-leader at Wal-Mart, and soon I was up to my elbows in the $4.99 bargain bin, sifting through crappy transfers of Glenn Ford World War II movies, miscellaneous Brat Pack flicks, and the entire Tom Arnold oeuvre. Then, jackpot! Creepshow, Frogs (Ray Milland, 1972, killer amphibians, why not?), and numerous episodes of The Lucy Show (CBS, 1962-1968).

Lucille Ball’s 1960s TV show ran in the afternoons when I was a kid, and I found it infinitely superior to I Love Lucy (CBS, 1951-1957), which was too stressful for me. On her 50s program it seemed that Lucy was always afraid that she would get caught for doing something she had been cruelly forbidden to do, and that Ricky would punish her. Though Ricky’s actual spankings were infrequent, the threat of domestic violence loomed large for this young viewer. On the post-Ricky series, Lucy was a widow, and her blustery boss Mr. Mooney did not seem to represent a true threat. Mooney hollered a lot, but Lucy remained insouciant about taking two hour lunch breaks. The Lucy Show was friendlier than I Love Lucy. And guest stars were frequent. Luminaries included Ethel Merman, Jack Benny, Bob Hope, Milton Berle, Edward G. Robinson, Kirk Douglas, Dean Martin, Don Rickles, and Sid Caesar. Already well past being “une femme d’un certain age,” Lucy wore smashing outfits and had dates with Dan Rowan, Robert Goulet, and, to her great dismay (in the show’s later incarnation as Here’s Lucy), Don Knotts. It’s hard to imagine a sitcom about such a cool, sexy old lady making it onto TV today. 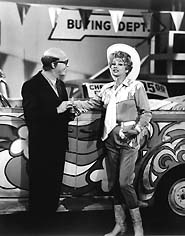 Mary Richards gets a lot of credit as a pioneering working woman, but Lucy was a plucky career gal some years before Mary, and she faced a number of workplace crises, though these were always played for laughs. Lucy had constant money problems, and Mr. Mooney frequently made her work overtime and on weekends without compensation. For Lucy, there was no union to turn to, no solidarity with other “girls” in the office, and no possibility of a raise, or of raised consciousness. Gloria Steinem’s influence clearly did not extend to this particular television universe. Helen Gurley Brown’s impact, conversely, could certainly be felt. Though Lucy would never use sex to get ahead at work, the flirty substitute hired when Lucy goes on vacation wraps Mr. Mooney around her little finger, almost stealing Lucy’s job. Lucy uses elaborate and decidedly unglamorous disguises to sabotage the sexpot. In another episode, Lucy explains how other secretaries in the office get raises, but she “is not the type of girl to wear sweaters two sizes too small.” Lucy may not think she’s a feminist, but she knows that she is being exploited, and that Sex and the Single Girl would not provide palatable solutions to her problems. So she remained broke.

In one episode, the penurious Lucy meets her friend Dottie for lunch and, to the great irritation of the cranky waitress, orders nothing but a bowl of hot water. Lucy adds free condiments-ketchup, steak sauce, lemon wedges, and a handful of sugar cubes-and then tucks into her bowl of free soup. Dottie exclaims, “Congratulations, you’re winning the War on Poverty!” and Lucy replies, “We all have to do our part.” Viewing this episode again for the first time in over 30 years, I remembered the hot water shtick very clearly, but not the quip about the War on Poverty, which would not have meant much to a five year old middle-class suburban kid. Certainly, no one who has read Aniko Bodroghozy’s Groove Tube will be shocked by my insight that The Lucy Show was, like most 1960s TV shows, more political than it appeared at first glance.

Allison McCracken has recently argued convincingly for the cultural and political significance of The Partridge Family. While The Brady Bunch stuck to the confines of the suburban home, the Partridges dealt with the outside world, encountering hippies, feminists, and other countercultural character types. In fact, the Partridges were themselves, in some limited ways, countercultural character types. Reading McCracken’s essay, it would be hard not to admit that The Partridge Family was “better” than The Brady Bunch. Be that as it may, I’ll admit to being a hard-core Brady booster. I always thought the Partridges were dullsville. Maybe it was just the submerged incestuous tension, but The Brady Bunch was always more compelling to me. Watching the Bradys and the Partridges today, I still prefer the former. My current viewing self matches my image of my past viewing self, and this is somehow reassuring.

But thawing out frozen TV memories by revisiting the shows of one’s youth can also be quite disconcerting. I fancied myself quite the feminist at age nine, which was why I wore a Farrah Fawcett t-shirt. Since I had never seen a woman solve crimes on TV, I thought Farrah was liberated. At age twelve, I carried a Ms. bookbag. (If anyone else in Alabama had actually heard of Ms., I might have gotten quite an ass-whipping.) These memories make me feel pretty good about myself and my past media tastes, but, of course, they have been frozen into consciousness at the expense of other memories less flattering to my grown-up self. Me, a huge fan of Family Ties? Impossible! The danger of being a TV studies scholar is that one is forced, eventually, to revisit the fetish shows of one’s youth, only to find that the affection one felt for a show was a screen memory covering up for a less-than-spectacular primal scene: Bob and Carol Brady, in bed, trading incredibly feeble quips about the impossibility of Sam the Butcher ever proposing to Alice. The writing just doesn’t seem as clever as it used to. So, did the 1960s Lucy live up to my high expectations? Yes and no.

There are a couple of things that are really great about Lucy in the 60s. First of all, she knows when to steal the show and when to sit back and let her brilliant guest stars do their thing. She is the center of attention when she dumps a bowl of Caesar salad on Milton Berle’s head, but afterwards he takes over, mugging it up while the audience virtually ignores Lucy. There is likewise an exceptional give and take when Carole Burnett guests as Lucy’s roommate. These winsome natural redheads (ahem!) do song and dance numbers at the drop of a hat, but it is Burnett, playing an introverted librarian, who steals the show when, after downing a few glasses of Chianti she shakes her booty through a spirited performance of “Hard Hearted Hannah.” 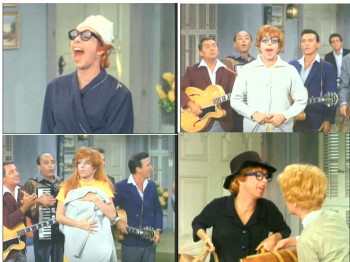 Carol Burnett on The Lucy Show

The Lucy Show is most compelling when all pretense of the fourth wall is dropped and performers (many of them with roots in vaudeville or other live theatrical forms) put on a show for the audience. Narrative is just a pesky intrusion: no one really cares why Ethel Merman is in Lucy’s living room-we just want to hear Lucy sing badly and Merman belt out a trademark tune. Likewise, the climax of Lucy’s trip to Palm Springs is not her successful explanation to Mr. Mooney of why she is there, when she was supposedly at home with the flu, but rather Lucy’s terrific “Up A Lazy River” song-and-dance routine. It turns out that Lucy was almost as good at singing and dancing as she was at pretending she could do neither.

When pure spectacle takes over-Lucy pretends to be a high-falutin’ interior decorator, Lucy babysits baby chimps, Lucy thinks she is hallucinating that Mr. Mooney is a monkey-these shows are everything I remember them being. When hippies, politics, the draft, and other ’60s realities appear, the show takes an unexpected turn towards the dispiriting. When Lucy and Viv go to the Sunset Strip dressed up like hippie chicks, they are repulsed by the longhaired weirdoes. After some crazy dancing, I guessed they might realize that there are some fun things about being a hippie, but they remained disgusted by the whole scene. When Lucy gets drafted, having received a letter meant for “Lew C. Carmichael,” it is oddly poignant to see her fight the draft board, the military doctor, and finally her drill sergeant, all of whom agree that she should be disqualified for being a woman, but none of whom have the authority to let her off the hook. The show’s critique of the military is tepid at best-the military’s not bad, just too bureaucratic-yet the “comic” spectacle of someone trying to get out of the Marines (and implicitly out of going to Vietnam) is more than a little disconcerting.

Ultimately, it is striking how much The Lucy Show is like the Wal-Mart bargain bin, mixing together big, medium, and little stars, some at their peak, some past their prime-like Joan Crawford, who got in trouble on the set for dipping into her hip flask. To older viewers in the ’60s, Lucy’s guest stars were not cultural detritus-Jack Benny, Jackie Gleason, and Kirk Douglas were still “major stars.” Yet to many younger viewers at the time, these were hopelessly square old-timers who already belonged in a bargain bin, if not a trash bin. You couldn’t get much more counter-counter-cultural, after all, than the George Wallace and John Birch Society booster John Wayne, whom Lucy worshiped like a god when he appeared on the show.

A showbiz pro, Lucy tried to come up with a wide variety of guests so that there was something for everybody, but that didn’t mean that she was going to host the kind of “radicals” that would show up on The Smothers Brothers Comedy Hour! Here’s Lucy (CBS, 1968-1974), unfortunately, could not maintain the energy and pace of the earlier Lucy Show. How reassuring, though, to see that Eve Plumb (Jan Brady) was a guest, with Donny Osmond, on Here’s Lucy in 1972. The great Jan Brady was not exactly countercultural, but she wore braces and glasses, had a fake secret admirer, and was fed up with “Marsha, Marsha, Marsha!” She was cool. Alas, the Biddeford Wal-Mart doesn’t sell Brady Bunch DVDs. Or the anti-Wal-Mart South Park episode. Or Jarslberg cheese, for that matter. They do, however, have computer stations set up for creating personalized shopping wish lists and sending letters to the troops in Iraq. John Wayne would have been proud.

3. Carol Burnett on The Lucy Show