The Televisual Tour de France on OLN: Confessions of a “Cynic” 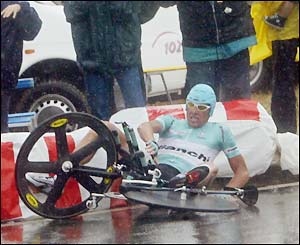 The state of television viewing in my household during the month of July is remarkable. For three entire weeks, my satellite dish’s Personal Video Recorder is running virtually non-stop shuttling the antics of Lance Armstrong on the Outdoor Life Network’s coverage of the Tour de France to the hard drive.

My family loves watching the tour, but I am firmly convinced that bicycle racing is a sport only televisable in the age of the PVR. Most of the time, the best riders sit back in a big group of bikes called the peleton. Lance Armstrong has won seven years in a row, and during most of the hundreds of hours of his victories, he has been hidden at the front of this peleton, flanked by his teammates (first on the U.S. Postal Service team; now, in perfect post-network fashion, Team Discovery Channel). The other team members are — in some gender studies crucial way — called domestiques because their job is to ride their bikes back and forth from the team car to get water so that Lance can keep properly hydrated.

For a sporting event, there is little of interest to watch during most of the race, except for the beautiful French countryside. Without the PVR to zap the commercials — a typical basic cable string of self-promos and John Basedow’s abdominal muscles — the boring race would begin to compete with the advertisements in a grand competition of stupefaction. Once in a while, Lance will decide to climb a mountain at a superhuman speed that no one else could possibly match, but he only needs to do this once or twice a summer to assure his overall victory in the “general classification,” as the genial British OLN announcers, Paul Sherwen and Phil Liggett, refer to the overall race lead. The ends of most races feature a mad sprint, whose excitement lasts for less than one minute, but Lance does not join in for fear of a tour-ending crash. I keep hoping that Lance will lose, given the hype that OLN heaps upon him. Aren’t the other riders — perpetual second-place finisher, German Jan Ullrich and this year’s upstart, Danish Michael Rasmussen — just as heroic as Lance? Rooting for the hyper-scientifically-trained Lance strikes me as only slightly less offensive than rooting for the Yankees. 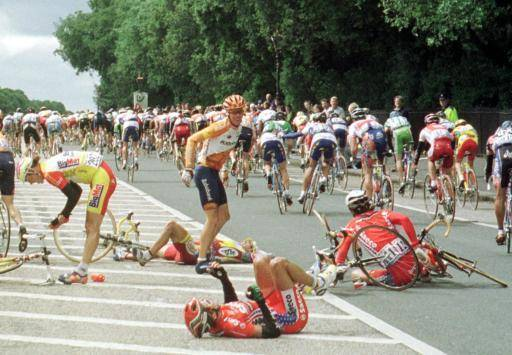 It baffles me why anyone would want to ride a bike in the first place: It is a mode of transportation specifically designed to be a pain in the butt (and remember, I am a film scholar, whose primary function in life is to sit in uncomfortable chairs in the dark!). I have friends who ride to work with their infants in crazy yellow contraptions tied to the backs of their bikes, as an environmental statement, but no such thing can be true of the sport bicyclists, as they discard at least 100 plastic water bottles on each race course every day. In his winning podium appearance on the Champs-Elysees on Sunday, July 24, in which he was, in unprecedented fashion, allowed to address the crowd, Lance chided the “cynics” who dispute cycling’s importance. I speak to you as an unrepentant cynic: as a television critic, I find cycling as bizarre a televisual event as ever. For a different opinion, please see John Levesque’s defense of OLN’s coverage as “exotic” and “exciting,” two adjectives that would have never crossed my mind, ever.[1] OLN shows each stage of the race as many as four times a day, constituting somewhere between a half and three-quarters of its daily schedule. It is perfect narrow-casting: basic cable outlet OLN links its coverage to outdoors programming meant for viewers interested in fitness. That’s not me — my walk to the university’s library from my office is exercise enough, thanks — but I continue to watch. I wonder, however, what the future of the Tour de France coverage will be without Lance Armstrong. Like the NBC Olympics, OLN’s coverage is focused on Armstrong as a representative of the United States, despite the fact that Team Discovery Channel (and more ironically last year, Team USPS) is mostly an international conglomeration of bike riders. My guess is that OLN will air the tour next year as well, but the ratings will be so abysmal that they will abandon the tour like some sprinter done in by a hors categoire climb.

The implications of my family’s now three-year-old July ritual are profound, and indicative of the state of post-network television. I recently decided to suspend my satellite programming so that I could get more writing done, until it dawned on my wife that this meant missing next year’s Tour de France. This, it seems to me, is the brilliance of narrow-casting. Other than an occasional rodeo bull ride, we never even think about watching OLN outside the month of July. The fact that we cannot suspend our $100 per month programming because of one event in one month on one basic cable network is a pretty strong defense of their business model. Vive le television! Vive le tour!