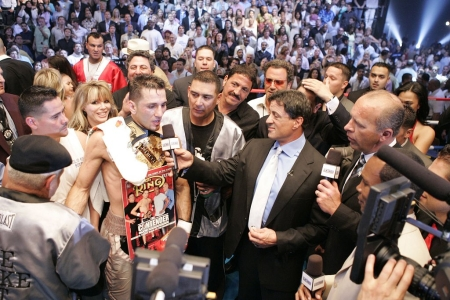 My colleague Kevin Sandler and I went to Las Vegas, with two of our students, for the live finale of The Contender. We were easily able to buy tickets for the morning bouts — the three fights chosen by fans on the Internet and the Battle for the Bronze for 3rd place. Although we were on-line the moment tickets became available, we could not get into the championship fight and its more star-studded audience. From fans in the queue at Caesars Palace, we learned a strategy for getting hot tickets — call a TicketMaster in another city if the local TicketMaster cannot produce seats. Even without the championship bout, we enjoyed six hours of reality show live finale. The three fan favorite bouts were produced for yahoo.com. The Battle for the Bronze was integrated into the televised live finale.

A long-time fight fan sitting near us described how the crowd of 3500 in The Contender‘s arena differed from other boxing events she had seen. There were many more people in attendance and many were not necessarily fight fans, but had come to know the boxers from the series. Family and friends cheered for their hometown guys. For the bronze, chants of “Gomez” and “Jesse” filled the arena, merging until their names were indistinguishable and the sides dissolved.

The live experience was more visceral than the televised or Internet experience, more so than we expected. Walk-in music played as the crowd found seats: “let’s get it started” and more. A warm up performer welcomed us to the show. He enjoined us to have a good time and to show our appreciation for the boxers who have worked so hard to entertain us. Contender contender Jonathon Reid sang the national anthem.

In the most energetic of the three fan favorite bouts (between Ishe Smith and Tony Bonsante), music put us in the television show in a way none of us had expected. In the last round, as the boxers went at each other, the throbbing base line of The Contender theme music underscored the intensity of the punches. When the bell sounded the end of the round, the gladiatorial Contender theme soared as trainers and family gathered in the ring to hear the decision. This visceral sound experience wasn’t repeated for the other bouts, including the Battle for the Bronze that followed immediately.

The arena was small with good sightlines, even from the top of the bleachers. A fogger put haze in the air; beams from the lights cut through the darkness of the black box room. Jumbo screens hung suspended above the ring. A camera on a boom could move close to action in the ring. Remote-operated cameras surveyed the crowd. One camera was firmly fixed on the boxer’s family (wife-mother-father-kids), seated in the first row. Held by operators who sat on stools or knelt ringside, these cameras were positioned to capture close-ups of the family members. Using picture-in-picture, dramatic shots of family emotion were inserted onto the jumbo screens during the fights–at the live show and on television (CLIP). Although not the subject of the camera, producer Mark Burnett and his family sat in the first row, behind the judges’ table.

Drama wrung from family is important to Burnett’s reality shows. Every season of Survivor has a family episode, when visits or messages engender emotional speechlessness from castaways and viewers. In The Contender series, before the boxers enter the ring, they affirm why they fight: “this is for my family.” The series and the live show capitalized on watching the family watch husband-father-son in the ring, getting hurt, inevitable in boxing. One particularly intense moment in the series was when Tony “The Bullet” Bonsante lost the qualifying bout. As he cried out in anguish at his loss, his kids ran up to his corner of the ring. “Daddy’s all right,” he reassured them. At the live show, Tony’s daughter was ringside; an interesting spectacle herself, she gesticulated wildly, arms flailing the air, urging her father onward. The masculinity offered by The Contender is physical power, mental strength, and the warm emotions of the family man.

The family of each boxer in The Contender had its own producer. At the live show, a producer hovered near the family and the family’s camera operator. For some bouts, several children were arrayed along the first row ringside. During one bout, a toddler played with the cables and tried to climb up the side of the ring. An adult (who appeared to be a civilian, not a producer) wrangled the kid to the sidelines. The family’s producer cued family members when it was time for them to climb into the ring to stand with their boxer as the winner was announced. There were rumors that producers told the wives how to dress and how to do their hair. The sister of one boxer’s wife sat near us. She expressed surprised and a firm denial when I asked if her sister had been told what to wear by the producers.

The presence of family appeared to be an effort to humanize the boxers. Perhaps family was a strategy to attract the female demographic that eluded the series. Yet, at the live event in Las Vegas, the audience appeared to be nearly half women. Whether one looks at “family” as emotional manipulation, as an exigency of the television business, or as a convention of television entertainment, it was clear that the production of The Contender cultivated family drama with deliberation.

Some fight fans were of the opinion that kids don’t belong ringside, that family intrudes on the solitary nature of boxing, that boxer and family should be separated for 48 hours before a fight. The boxer needs to concentrate; family interferes with this mental focus. Bicycle race fans know that Lance Armstrong plans to retire to spend more time with his children, but Armstrong’s kids are not positioned along each stage of the Tour de France in sight of the OLN cameras. Maybe sports do not merge comfortably with the need reality television has for family drama.