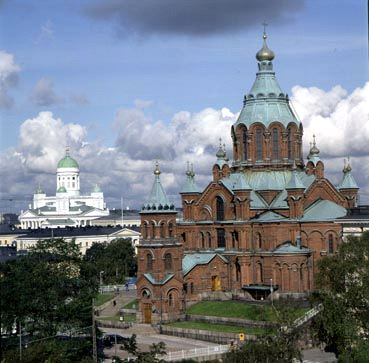 From last September until June, I lived in Helsinki. While there, I imagined one of the things that would most engage me once I was back would be American television in all its cable excess and glory. But this hypothesis, when put to the test, proved to be mistaken. I am watching television, of course. But I haven’t rushed to immerse myself in American flow and all the new series that I missed. I haven’t even spent much time in front of the television (except for one weekend when I was home alone, and spent two evenings watching “chick flicks” on cable). Instead, I find myself reengaging slowly, and thinking about differences and similarities between television as an everyday practice in the U.S. and in Finland, what I am glad to have come home to and what I am sorry to have left behind. What follows are some comments on reentry.

Weather. It’s hard to beat the weather coverage in the U.S. There are three stations on my U.S. cable service devoted to weather, including two that specifically focus on local conditions. While I often bemoan the limited global weather coverage on The Weather Channel (yes they offer it, but only sporadically), especially in distinction to the international weather forecasts on European news cable services, weather reporting is available on a continuous basis, and I never have to wait more than a few minutes to access current, local forecasts. One of my routine habits, and one I evidently missed, is watching the weather while getting ready to leave the house. It affords a sense of confidence — however misplaced — that I am appropriately garbed for current conditions. In Finland, morning news and talk shows include weather reports, but these are very brief. Blink and you miss it. By contrast, in Chicago, weather reports on local news gleefully display and analyze elaborate maps, and discuss weather systems forming off the Pacific coast, in northern Canada, or in the Caribbean threatening to affect the Midwestern climate in the course of the coming week. Yet I probably end up with clothing too heavy or too light for climatic conditions as often in Chicago as I did in Helsinki. In other words, the symbolic value of all this U.S. television weather coverage probably outweighs its actual use value.

Reruns and Strip Culture. Finnish television hardly ever shows reruns. When a series is on the air for the first time — Finnish, British, Swedish, American, whatever — t is shown in order, one new episode at a time, until it is over. If the program reappears, it is for a new season. Programs are rarely rerun; you can almost count the exceptions to this on one hand. This seems awfully rarefied in contrast to American programming, on and off networks. In the U.S. it seems that as many or more hours of programming are devoted to reruns as to new programming. In the U.S., depending on where you live, you can see The Simpsons several times a day. In Finland, you can see The Simpsons all of three times a week. Even within the course of a single season for any given show, American television networks routinely include rerun episodes which might come from earlier in the current season or from the previous year, stretching the airing of 20-plus new episodes over an eight or nine month period. In Finland, you can be sure to see a new episode (or to miss a new episode) each week for the four to five months it takes the air one season’s worth of episodes.

Digital Television Interaction. A number of channels in Finland offer programming that exploits the interactive capacities of mobile telephones. There are real-time chat forums on television from viewers who text-message from their mobile phones. Some of these are all text, though at least one has a digital animated character who converses with the lone live host, and may “speak” the lines provided by viewer text messages. There are also interactive games that you play with your mobile phone and watch on television. Some of these are just game boards but others include one human player–a goalie blocking hockey pucks from scoring, or a bikini-clad woman returning volleyballs across a net. If the puck or ball gets past them, the player scores a point. The field of play is a blue screen virtual arena; the person is real. This is more than a cheap way of programming: it is downright profitable, since viewers pay to play. The interactive games generally cost one Euro per minute. One wonders about the phone bills of players who manage to rack up triple digit scores in one session. When I spoke to a high school class in Helsinki, a number of students asked if we had these sorts of games/TV programs in the U.S., and expressed profound concern about how these programs took advantage of younger children. As much as anything, I was struck by the way in which their comments demonstrate the pervasiveness of moralizing discourses about television and new media’s capacities for exploiting innocent “others.” Teenagers — one of the commonly identified demographic targets of old and new media’s bad effects — ably expressed their alarm about media exploitation on behalf of even more innocent others (as if the median age of those participating in this sort of interactive gaming was 8).

Sit-coms do cross borders. In a recent issue of Flow, John Hartley noted that “US sitcom is a TV staple across the planet, like it or lump it.” This is absolutely true, even though it flies in the face of another truism about the mobility of certain cultural forms that gets expressed in different ways, but basically holds that comedy and humor are culturally specific and do not translate or travel well. (This idea is adroitly explored in another recent Flow column by Anna McCarthy, in relation to whether and how British humor plays in America.) This second platitude is probably more widely held, and has often been used to explain the popularity of American police/action/melodrama programs in global television markets in contrast to comedies, especially in the 1970s and 1980s: Kojak, Dallas, Dynasty, Baywatch, etc. No sitcoms. They don’t translate. Remember when the immense popularity of Married with Children in Germany was routinely cited as the exception that proved the rule? Ultimately, these perspectives coexist despite their incommensurability. They both speak to questions about cultural and political economy in a global context. If American sitcoms are a staple across the planet, it can variously be claimed that they are “popular” with global audiences or that American media companies are shoving these down people’s throats by supplying them at such low cost. Then again, maybe comedy (or some comedies) could always travel, depending on how you — or others — wanted to read it. Perhaps it is the case that global tastes are changing. But the popularity of many American sitcoms in Finland certainly suggests that Hartley’s “like it or lump it” perspective is a more useful starting point for considering how comedy does travel. Among other programs, The Simpsons has been widely known in Finland for over a decade — even though with its dense intertextual nexus of references to all manner of American culture (including American media), one might expect it to translate worst of all. And when I arrived in Helsinki in fall 2004, Friends and Sex and the City were two of the most popular American programs on Finnish television. These three sitcoms are also among the programs that do get rerun on Finnish TV.

Finns like American television, but they like Finnish television even more. While U.S. programs (as well as British, Swedish, and German ones) are regularly shown on Finnish television, Finnish programs are even more popular. Finnish versions of programs from elsewhere are generally more popular than the imported versions. This is especially notable in relation to recent reality programming. Idols Finland rated higher than American Idol. The Finnish version of The Apprentice (Diili) draws more viewers than the American version, even though both are shown. The same is true with Queer Eye for the Straight Guy (Sillä Silmällä). I conducted an informal and highly unscientific poll of viewing habits by having students in my American Television Culture class identify their favorite shows on television. While U.S. programs appeared on many of these lists (including shows I have already mentioned), a range of Finnish series also routinely appeared.

Sooner or later, it seems, every Finn shows up on Finnish television. Finland has two non-commercial stations run by the state broadcasting company (YLE) and two national commercial stations. These stations provide many opportunities for ordinary people to appear on television, including in public affairs discussions with studio audiences, “person-in-the-street” interviews, documentaries, and feature stories on morning talk shows. Based on my prior experience of Finnish television, I had hypothesized even before my most recent stay that every Finn is likely to be on television at some point in their life. I mentioned my hypothesis to someone I met last October, and he was all ready to disagree with me until he remembered that a few years earlier he had appeared on television in some street interview, and even got a phone call from his grandmother who had seen him on TV. After due consideration, he was inclined to support my hypothesis. So I probably should not have been surprised when I started seeing people I knew on Finnish television. (I’m not even counting university colleagues who were interviewed on the news on issues related to their fields of expertise. This happened all fall, since the faculty in North American Studies at the University of Helsinki was considered an important source for insight into the American presidential campaign.) First of all, since I don’t know the language, I didn’t watch that much Finnish programming, even though I did watch some. And I didn’t meet that many people outside of work. But I was curious about the Finnish version of Sillä Silmällä (Queer Eye for the Straight Guy). After catching a few minutes of the first few episodes, I finally sat down to watch an entire episode, and was quite surprised when I coincidentally recognized the “hetero” make-over target, a musician I had met on several occasions. I have never seen anyone I know on any American reality program, and I never expect to. Several weeks later, channel surfing, I saw someone else I knew in a documentary program on three choral groups in Helsinki. She was the conductor of one of the groups and, as it happens, also in the same band as the Mr. Hetero I knew from the Finnish Queer Eye. I am wondering if there is some logarithm to calculate this: you meet one band in Finland with five members, watch Finnish television for X number of hours over Y number of months, and you will be likely to see someone you know on Z occasions.