Race Fictions: Crash, Do the Right Thing and La Haine 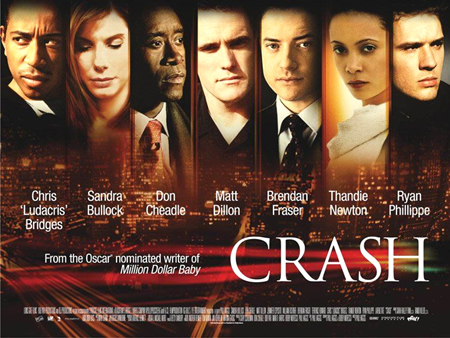 In a certain sense an heir to Spike Lee’s Do The Right Thing and Matthieu Kassovitz’s La Haine, Crash sets out to unpeel the fiction of supposedly evolved post-Civil Rights era U.S. ‘racial’ mores in general, and the romance of LaLa Land in particular. Does it work? And what’s the value in doing so, if it does work?

The writing is often refreshingly good. It comes across as an articulate ensemble cast version of Lee’s famous five spouting their ‘racial’ hatreds into the camera. Whether in Sandra Bullock’s or Thandie Newton’s emotional terror and spitting rage, or the brutal realism of the cynical, embittered 17-year veteran Black precinct sergeant, the collective American fantasy in force in ‘racial’ buddy movies and happy MTV party-goers gets no play in this one.

What is more, the movie definitively moves away from the obsession with Black-White, not in any sense because that issue is passé — check the last paragraph! — but to register the multiple ethnic antagonisms that we play more or less 24/7. The smoldering suspicion the Iranian shopkeeper and the Sandra Bullock character nurse toward the Latino locksmith, the Black petty hood’s condensation of all East Asians into “Chinatown,” the sour wisecrack that the Don Cheadle character throws at his Latina sexual partner when she decides to curtail se with him, all serve to strip away the comforting notion that any of us hold unique property rights in racism.

At the same time, there is never any doubt in the film that White people still run the big show, even if they may be blocked in some small sideshows by Black petty officials, and even if an angry Korean woman can yell at a White nurse. The film is much more than an exercise in “we’re all guilty,” which is a very convenient and comforting position to take. As we see the machinations in the recording studio, or the manipulation of the Don Cheadle character in the interests of the Brendan Foster character’s political career, this much should be clear.

A further strength of the film is its degree of success in rapidly conveying some complexities and ethical ambiguities in the characters. In an ensemble cast film, this is not an easy task. I do not share the view that the Sandra Bullock character’s eventual admission of her deep loneliness is there to excuse her attitudes, merely it is there to round out her character, rather than leave her as a rich-bitch lampoon. The domestic and career dilemmas of the Don Cheadle character, given especial salience by his remarkably expressive countenance, are further testimony to this richness in portrayal, as is the sharp dialogu between the two petty hoods.

My fundamental uncertainty in this film is about its portrayal of the LAPD. They turn up quite often, and it is refreshing — though very depressing that it has to be refreshing — that wanton police nastiness is portrayed so directly. The sexual violation of the Thandie Newton character, the near-annihilation of the Lorenz Tate character when his control finally blows, both speak to the reality that the police all too often operate as an occupation force rather than a social defense force when it comes to people of color and the poor. The cynical precinct sergeant already referred to is a brilliantly damning case in point.

The turning point, however, is arguably the racist beat-cop’s parting advice to the Ryan Philippe character, that in that job you do not know who you are until you get into the actual situation. The film then has the racist cop instinctually follow his training and save the life of the Black woman he has violated, at great risk to his own — the risk is heavily spelled out visually — and the decent rookie in a moment of panic shoot a petty hood dead who has offered him only friendly conversation.

In the context of long-entrenched official denials of police violence against people of color, for which the second line of defense in the light of evidence to the contrary is always “OK, but what would society be like without any police at all?” — so don’t get too aereated! — this parallel positioning of the two cops has a very unpleasant odor. It’s an odor which is particularly pungent given the film’s attempt otherwise to rip the scabs off.

So to return to my first two questions: the film mostly does work for this reviewer, for the reasons given above, and others there is no space for here. It definitely stands out from the pack. What’s the value in it? Ultimately, only talking to its audiences over time could begin to let us answer that question with any confidence. But it did run for quite a while, including in some locations such as my current small mid-Western city, where one might have expected a lot less interest. Perhaps we are a little further along in the USA than the situation in France at this time, where when Kassovitz’s La Haine came out, the French Cabinet solemnly sat in conclave and watched it as though it were a documentary window into a world from which they were utterly remote, rather than a neo-realist narrative. There is U.S. television material that addresses these issues frontally (though not much). But this is dangerous ground, and I will leave it at once.

The rewards for smugness about ‘racial’ issues in the USA are a whole lot higher and more pervasive than for honesty. Will this be another Thelma and Louise, then — a much-talked-about, but never repeated, “success?”