If We Are So Smart…. 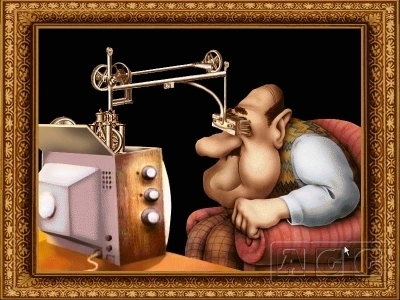 I had been mulling over Steven Johnson’s thesis that TV makes us smarter when Aniko Bodroghkozy’s piece set off cross currents in the last two issues of Flow. And then a presenter at a recent MIT conference embraced Steven Johnson as part of the cultural studies project that validates popular culture. I therefore wondered if my objection to John Fiske formed a basis for my objection to Johnson. I am grateful that the pieces in the last issue corrected my drift into mistakenly lumping the two together. Johnson’s analysis is nothing more than congratulating TV on becoming more self-reflexive (a dubious distinction) while Fiske explores the interesting ramifications of encoding/decoding theory for mass culture. Even after we quickly dispose of Johnson, Bodroghkozy’s dichotomy between Fiske (cultural studies) and Robert McChesney (political economy),[1] is interesting since it re-raises the issue of how to approach media studies during a repressive swing in American and indeed global politics (I am thinking of the Vatican here). Media studies now may take us away from models that flatter the audience towards one that sees popular culture as renewing the strength of narcotizing dysfunction because media proliferates. The narcotizing effect comes from getting too much information and misinformation from new media.

Jenkins is quite right to state that McChesney’s current high profile is a response to the disappointing results of the last few elections. I part with Jenkins when he tries to see a glimmer of hope in the matched split of the election, in the low approval ratings of the administration, in their inability to win support for their gutting of social security. These are attempts that are quite natural for Jenkins to sustain our belief in the vox populi. The goodness of the American people that is from time to time frustrated or perverted by evil structures is a necessary belief for good media work but the evidence for it right now is rather scarce. The open corruption of our political leadership and the immoral/illegal/incompetent activities of our security forces should have meant that the elections were not even close.

Republican successes force us to consider the big question of the relationship of popular culture, mass media and politics just as Horace Newcomb wanted to consider these issues at the beginning of his career. It does seem that political economy of media is but a partial explanation of the political reversal of the last few years. There is nothing inherent about media oligopolies that correlate with the viciousness of contemporary scene. Indeed the same oligopolies of television that were so timid during the McCarthy era are the ones who sustained Edward R. Murrow for a critical time and gave us the coverage that repulsed the nation against Jim Crow laws and segregation. The three networks may have given us the mindless TV of the sixties, yet they also gave us the critical TV of the seventies. Other historical examples show that oligopolies bend from left to right, so consolidation is not sufficient to explain the present bend. Nonetheless McChesney has done good service in making connections between the rightward swing in media coverage and the deregulation that has been pushed since the “burning-toaster revolution” of Mark Fowler and Reagan’s FCC (Miller).

Should we go deeper than McChesney? We pay lip service to our desire for a synthesis of left wing political economy with cultural studies, but we are too fearful of grand narratives to really work at such a synthesis. Thus there is little motivation to go deeper. Academics will not be swayed by such broad analysis. Politicians, who already dismissed any media academic influence when they wrote the 1996 Telecommunications Act and shut downed the Office of Technology Assessment in 1995, are not interested in analyses supplied by anyone other than lobbyists. Deeper analysis would only encourage a widening gap between the academy and the policy makers. If I understand McChesney and Mark Crispin Miller at all, I understand them to be seeking political influence and they ought to do so because we know we need a program if and when democracy is restored to our country.

Dana Polan suggests how to go deeper with his thoughts on post network TV eroding the “folk culture” of the national-popular. I found myself behaving just as he describes, searching for the niche within the media that flatters my own ideology and lulls me into thinking I have contributed to the political discourse by the passive action of listening. On the cusp of the network TV era Lazarsfeld and Merton defined narcotizing dysfunction as when the viewer “comes to mistake knowing about the problems of the day for doing something about them” (502). I think this dysfunction must be further intellectualized particularly because post-network TV seems to be an era when scandals are exposed but not redressed. Watergate was exposed and redressed and TV played a large part in broadcasting that episode in 1973-1974. However, starting in 1987 with Iran-Contragate through the current revelations about administrative lying and incompetence, TV exposure of wrongdoing has little redemptive power. This is of course from my left wing point of view. But the right wing could also wonder why TV exposure of Clinton’s sexual conduct did not further alienate the public. In either case it does not seem that exposure on TV sways a polarized audience. Is the audience too distracted by its own harried leisure space and its scramble to maintain living wages to respond to the other than to watch it? Are the instant polling and other new media simulacra of interactivity lulling the audience into ineffective action?

This narcotizing to political corruption can be linked to another social theory of media that Jurgen Habermas calls re-feudalization. He describes media as ideally the sphere where public opinion is arrived through discourse and made public both to the State and to the citizenry. However, re-feudalization means that mass media do not fulfill this requirement but instead become a single medium for the display of power by the State. The public is not necessarily a captive audience before this display of the State but certainly a normally passive one, except in times of revolutionary strife. If this intellectual project of linking narcotization and re-feudalization to media proliferation was developed, perhaps we could better understand the paradox of consolidated and economically powerful media acting so timidly at the beck and call of a radical right government.

Note
[1] Which also played out on the campus of the University of Illinois U-C in the same time period, between Larry Grossberg and Thomas Guback. It is fitting that McChesney now occupies Guback’s line.