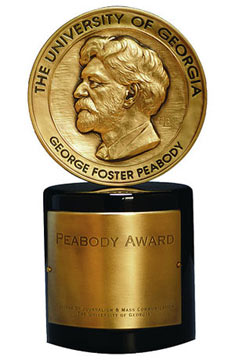 I’m hijacking this space, offered to me as a site in which to comment on the recent Peabody Awards selections. I intended to describe some of the selection process, and ruminate on matters of quality, on excellence, and on the evaluation of media productions. But wonderfully provocative essays in the last issue of Flow suggest a broader context for these topics, and connections among several of those essays compel more than a brief paragraph of response.

Aniko Bodroghkozy’s personal expression of concerns about the relative value of different types of “media studies” addresses issues most of us have faced privately or in tight discussions surrounding the purpose of our research and teaching. They have lain at the heart of a range of enterprises since the first stages of popular culture studies in the U.S. and cultural studies, first in the U.K., then everywhere. She frames the issues as polarities represented by Robert McChesney and John Fiske, but they could as easily be referenced with disagreements between some representatives of the Birmingham Center and the strong political economists such as Garnham, Murdock, and Golding. Just below the surface of these arguments is a general issue recognized by many of us who come at media studies from “the humanities,” a concern for the immediate and continuing worth of our efforts, our observing, teaching, and writing. The concern is, in fact, a more general one for the humanities in the largest sense, more intense in some periods, some contexts than others. I recall a moment sometime around 1967 when, in the midst of one of my three required bibliography courses I raised the question of how this or other literary study might “help anyone.” The response, warmly and generously offered from one of my most cherished teachers, one of the gentlest and kindest I ever knew, was that if that was my primary interest I should consider moving down the street to the medical school. For me, the wedge between more study of 19th Century American novels and surgery was to take up the study of television.

I do not think the questions Bodroghkozy raises will go away, nor do I think work such as her own outstanding histories should be in any way dismissed for not attending to more programmatic versions of media reform. I do think there are ways our careful study of television content, too often dismissed by some like McChesney, can make contributions to issues related to reform efforts. For one thing, as Bodroghkozy and others have shown, such study can lead to finer-grained analysis of what media industries do. Claims that industry consolidation has led to control by five or four or six “conglomerates” or individuals are not borne out by careful examination of offerings now available. One overlooked aspect of these arguments is that even media conglomerates must turn to the small, but intensely competitive talent pools that provide television content. They also overlook the lack of any coherent or useful definition of “independent producers” in television and a host of related questions. I make these points not to dismiss the need for continued monitoring of ownership issues or media concentration, but rather to complicate those projects. In the face of corporate power and influence we can hardly afford simplistic approaches.

These matters are especially important in light of Dana Polan’s commentary on how seldom audiences, viewers, television users now see much of anything in common. The political implications of the increasing diversity of channel offerings have frequently been noted. Elihu Katz outlined them eloquently in his 1996 essay, “Deliver Us From Segmentation,” (Annals of the American Academy of Political Science, 546:22-330). Of course it’s interesting that Katz’s best example of a non-segmented media system is a one-channel system such as that he helped establish in the early days of Israeli television. And even Todd Gitlin acknowledged, somewhat grudgingly, that American network television had advantages in the three-network era that were lost in the increasing welter of cable offerings (Twilight of Common Dreams, 1995). Begun in the mid-1980s, the end of the “network era” has added frustration to all aspects of television studies.

Polan outlines the sources of some of that frustration very precisely. We have truly lost something in the scramble for more channels, formulas and formats, and programming strategies. Rather than seeing the political implications of the diminished common experience only as a loss, however, my sense is that the newer configuration requires a substantial overhaul of what we mean by “television.” If, for example, we (excepting historians) forego our focus on a central socio-cultural medium and substitute the sense of a magazine stand, a bookstore, or a library, indeed a warehouse, many of our basic assumptions and approaches require thorough revision. This includes assumptions and approaches regarding the political force of “the media” as well as how we might go about “media reform.” I’m not as concerned with finding books in television programs, as is Polan, though I was able to come up with four or five more examples. And I’m perhaps too willing to view all television as more emotionally than logically driven, and thus less concerned about the lack of one type of “critical analysis.” But I am concerned with how we “regulate” or “review” or “reform” libraries, publishers, book sellers, or other “content warehouses” and what that kind of comparative analysis might suggest for the worlds of electronic media. The analogy is, like most, imperfect. But it gets us closer to useful questions, I think, than continued reliance on older models. It seems quite clear that technology has outstripped policy in this arena, and perhaps economic models as well. We would do better to contribute to the invention of different models than to perpetuate mistakes embedded in older ones.

In this regard I am surprised that none of these commentators references John Hartley‘s Uses of Television. That book, by the resident provocateur in the original Fiske & Hartley tag team of television studies challenges with the same richly textured idiosyncrasy as his other works. Arguing that we should think of television not as cause or site or artifact or text, but as an active “teacher,” Hartley goes around (or simply crashes through) many conventional modes of understanding it. One need not accept Hartley’s assertions; indeed that’s probably not expected (and might even be taken as a disappointment). One must, however, respond to rather than dismiss them. His approach requires fundamental reconsideration of what “media reform” would mean.

But some questions seem to be eternal, and questions of value, of “aesthetics” are among them. Like others, I did hope that my studies would have some more direct impact, primarily, at first, on the television industry. In a crude stab at defining a “television aesthetic” I praised some programs and outlined the features that made them “better” than others. I remain convinced, with Jason Mittell, that such matters are extremely important. But we have to be rather careful in pursuing them. The only time I have felt that a piece of critical analysis had any direct impact followed my own “outrageous” claim that Magnum, P.I. was the best show on television (Channels, April/May, 1989). The producers were thrilled and used an edited version of the piece as a full-page ad in Variety as part of their Emmy campaign. In later conversation they informed me that my observation of the “cumulative narrative” strategy of the show described exactly what they intended and that they now put sticky little “C.N.” notes throughout their scripts. The show immediately got worse. I stand by the claim regarding its prior success, however, and I do think precise, evaluative criticism, in the academy or in the general press (I find the situation there better than Mittell, certainly better than in previous decades), is a component of active work toward media reform.

That, in many ways, is the underlying premise of the Peabody Awards. Begun as an effort to recognize radio in a manner similar to the Pulitzer’s recognition of outstanding work in print, the Awards have now enter their sixty-fifth year. Entries are self-selected by producers, organizations, networks, individuals, as the “best” work they created in the previous calendar year. A board of sixteen makes final decisions following review and recommendation by committees composed of University of Georgia faculty, staff, and students. The board is not bound by their recommendations, however, and often disagrees, making awards to programs not passed forward by initial review. The single criterion for a Peabody Award is “excellence,” a value judgment if ever one was. We are quick to say that excellence takes many forms. Aesthetic value is often among them, but so too are matters such as the impact of a local news program in its community, the skill with which a children’s program addresses a problem, the significance of an independent documentary seen by a small audience on a cable channel, and so on. The Peabody Board comprises representatives from many professions, with varied experience. Most, but not all, have some experience with or in the media industries. Over the years, editors, performers, educators, and critics have served. There are no set categories and no set number of awards. There have never been more than thirty-six in any year; entries now number about 1100 annually.

The extended discussions leading to the final list of recipients are the richest, most complex, most fully deliberative I have ever encountered with regard to understanding electronic media. Persuasion, compromise, selectivity, refusal, insight, inspiration — all are part of the process that determines what we decide are the few, the best of the best, that exemplify excellence in media production. We consider our final list a challenge to other media producers, to organizations, corporations, critics, students, teachers, politicians. When representatives of the major media studios follow small station producers or independents to the stage to receive their award they often remark on the humbling nature of the experience.

This process is grounded in very old forms of consideration, old ways of seeing and deliberating, of evaluating and recommending. I refer to the Peabody Award as a “citizens’ award” and if I consider the Peabody Board as an “audience,” I can take heart in John Fiske’s observations and those of others who champion truly active audience responses. I can take equal encouragement from Charlotte Brunsdon’s or Jason Mittell’s calls for more attention to evaluative procedures. I do not believe that our decision to make awards to The Daily Show with Jon Stewart: Indecision 2004, or to WBAL’s investigative report on pollution of the Chesapeake, or to The American Experience: Tupperware!, or any other among this year’s thirty-two is an exercise in banality. These materials and others like them through the years may be industrially produced and corporately owned. Some appeal to very small, some to very large audiences. But they have all been reviewed, discussed, compared and considered in a context of genuine concern. When the final list is affirmed each year, I believe the awards stand as a strong contribution to media reform. Similarly, I remain convinced that all truly careful, intellectually honest approaches to this medium are worthy enterprises.