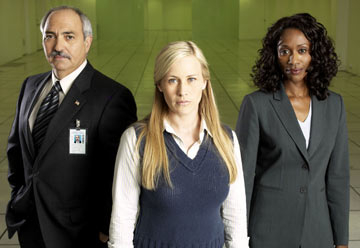 You mean we have a dryer that eats things? –Bridgette (Maria Lark), “When Push Comes to Shove (1)”

A typical day for Allison Dubois (Patricia Arquette) includes lots of spooky strangeness. The titular character in Glenn Gordon Caron’s Medium, she’s burdened with one of those quirky gifts that ground cop shows. Dead people visit her in dreams and during visits to crime scenes, insisting that she solve their murders or find their relatives or somehow put right the universe.

This role sets her against and alongside the “lawmen” who surround her, from her gently wise employer, Phoenix D.A. Manuel Devalos (Miguel Sandoval) to rocket scientist husband Joe (Jake Weber) to Texas-based Captain Push (Arliss Howard). “I don’t mind working as a human lie detector,” she whines in the first season’s closing episode, “When Push Comes to Shove (1)” (this would be the same episode that begins with Joe’s nightmare and little Bridgette’s worry about consuming appliances). Mostly, this seems true: she’s a generous, good-girly worker and mom (of three believably precocious blond daughters), willing to give time and energy she doesn’t even realize she has. But it’s also something of a lie, for Allison, aspiring lawyer, dedicated housewife, also resents all the incessant demands. In other words, she’s like most everyone else on the planet: usually tired, sometimes tetchy, always waiting for the next disaster to strike.

Despite its gimmicky hook, then, Medium is not very supernatural; the meetings with ghosts always seem too material, too utterly embodied to be spooky or very mysterious. (And now that her oldest daughter Ariel (Sofia Vassilieva) and Joe are starting to have scary dreams too, Allison’s visions don’t even seem so special, more like a contagion.) The show’s rhythms are deliberately and often creatively unflashy. It’s not nearly a smash hit like Lost (though it is one of newly number-foured NBC’s precious few bonafide successes) and if Allison’s often distressed, she’s hardly desperate. Instead, she has a recognizably crowded schedule — cereal breakfasts, rides to school and music lessons, a husband who’s got his own work and mom-related commotions, and fast-maturing daughters articulating fears of loss and abandonment.

And what if mom can’t figure it all out? As the season went on, she was apologizing more frequently to Joe for leaving him with the kids, expecting him to manage as she ran off into the night to peruse a dead body or jangle a suspect’s nerves. She’s not precisely happy about this new course, but she’s glad to feel helpful, as if she might have effects on a population that’s increasingly angry, psychotic, or careening out of apparent control.

So if the gift isn’t precisely the selling point, you might consider that Allison is (and indeed, Arquette’s subtle performance is garnering all kinds of praise) –she doesn’t wear bright red wigs, speak Thai or slay vampires, but she exemplifies a recognizable resilience. Allison has a regular, attractively lumpy shape and hectic schedule (she’s had three children and has no time for Pilates). She also has a drinking issue; back in the day when she was resisting her gift, she was looking to “quiet the voices” by self-medication.

As if to underline her everydayness, Allison inhabits a world driven by tv reports. Whether it’s Katie and Matt, local news, or cable reports on recent criminal activity, Allison and her girls are surrounded by what passes for news. Her life — the mundane parts and those extra-special parts — is informed by tv, which makes Allison less bizarre and more familiar than she might seem by the network’s promotional blurbing.

That she receives her own urgent updates by way of visions only underlines the metaphorical connectedness between dimensions. And this is where the show is most provocative, as it translates the term “medium” variously: she’s a medium, she reads herself as medium, she is tv, she is consumed by others (as in the D.A.’s hopeful query, “Did you have a dream last night?”). Where some series about television tend to be literal-minded (they’re set on a set, the characters are in the industry), this one is metaphorical and loosey-goosey, riffing on its own weekly inventions, concerned with the entire business of production and reception, questioning that whole flow thing. Even Allison’s visions complicate the tv thematic, as they’re sometimes past and other times future, and she can’t tell which because tv is always present, don’t you know? And so she takes her description to the office, where the D.A. always has time to dig up a file to correspond or send them off in a useful investigative direction. Good to have judicial system’s mechanisms at the ready when your dream’s parameters aren’t so clear.

On occasion, the murder stories in Allison’s head run like actual tv shows, or at least collide in aesthetically intricate ways: in “I Married a Mind Reader,” she’s inserted into a ’60s marital melodrama, on and off the tv screen, playing the blandly Darrin-ish star’s mistress and running smack into his wife (the formidable Frances Fisher). This recurring dream is triggered by a fever and cold medicine, starting anew whenever she plops down on the couch in her bathrobe, the tv set glowing as she drifts off, clutching Kleenex. The image raises questions not only about the reliability of the ensuing dreams, but also her reasons for going back: is she trying to re-solve an already closed murder case? Is she enjoying her dalliance with the actor? Is she representing that ancient model of female tv consumption, passive and yearning? (The fact that Allison doesn’t just insert herself into the sitcom plot, but takes up the more sensational, less neat off-set romance, hints that her delirium or her desire is not directly prompted by what she sees in this show.) Or is she a new sort of consumer, one who revises the scripts she receives, engages with them critically, reads them well and sometimes poorly?

At other times, Allison’s signal is skritchy and obscure, maybe promising improved reception in some indeterminate future. In “Lucky,” her news seems immediate (or more identifiable, anyway), when she sees her soldier brother Michael (Ryan Hurst) die in Afghanistan. That he arrives at her door shortly afterwards eases that particular nightmare, but leads to another, in which she’s haunted by a dead officer murdered by one of his own men, namely, a friend of Michael who has accompanied him to Allison’s home. Her efforts to sort out the case are hampered by Michael’s own inclination to drink himself to distraction, which leads her to reassess her psychic skills yet again.

Such reassessment comes up more than once in Medium. In some sense, Allison starts again each week, with mostly self-contained, not arcing episodes (not very trendy in shape or execution). At the start of each episode, she (or someone close to her) wakes up from a bad dream, a grisly murder or a threatening situation, doubting her insights, wondering about limits and trade-offs. By the end of each episode, some image has been decoded and some wrong has been addressed, though not always righted. Sometimes she’s misled (the dopey episode about ‘the And this is the lesson Allison can’t quite absorb’, that she makes mistakes that sometimes have deleterious effects, sometimes even for her family. Good intentions, fighting for the seeming good guys, or at least, the ones with badges. And while the midseason casting of David Cubitt as Detective Scanlon suggests that, like Cold Case, this show started to worry about a woman making solo detecting plots too “emotional,” he also introduced the plotline, via dead relatives, that a Maury Povich episode might inspire murder, à la Jenny Jones, that is, too much tv is trouble.

Allison’s relationship to tv remains less fixed. Surely it molds the soundscape of her existence, moves her or Joe to turn it off if a missing child or war news report pops up during their mornings-with-kids routine. But it’s neither all-pervasive nor abstract; rather, it’s a fixture and a process, a medium through which she views, resists, and comprehends her environment. It’s an environment defined by violence and chaos, only partly ordered by weekly schedules, graphics, and labeled anchors and guest stars. But tv, like Allison, is also a medium that makes mistakes. And this is what Medium shows most provocatively, if not always consistently, the costs of making those mistakes, the contradictions of living with them, the profound effort of making amends, for all involved.

Links
More from Cynthia Fuchs on Medium
More on Medium