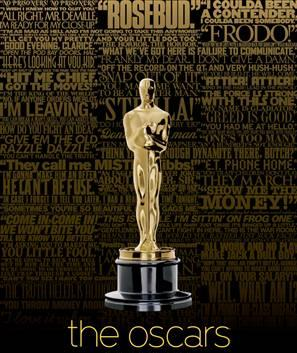 The Academy of Motion Picture Arts & Sciences website describes the Oscars® as the Academy’s most famous and most important activity. With its international telecast to millions, “the Academy Award presentation has enabled [AMPAS] to maintain a varied year-round calendar of programs and events and a wide-ranging educational and cultural agenda.” The famous exhibitionist event supports the less visible work of the Academy. The Oscars ceremony is the public face of the Academy, “the crescendo … when hundreds of millions of cinema lovers glue themselves to their television sets” to peer at the splendor of the movie industry.

The 2005 Oscars tried to make the show more visually interesting and to move it along more quickly (“drive-thru Oscar lane” quipped emcee Chris Rock). To diversify the ceremonial space, some of the presentations were moved off the proscenium into other spaces of the theater. Awards were presented from box seats balcony and, like David Letterman’s audience participation gags, from the aisles of the main floor. The 2005 Oscars telecast was parsimonious and visually inventive in the use of clips, resulting in lost opportunities to educate and delight. Some awards used no clips to illustrate the nominees. For other awards, clips were projected onto the floor at the feet of the nominees, gathered together on the stage. Some clips were squeezed into parabolic shapes along the sides of nominee title cards. These spatial strategies may have provided visual interest and moved the ceremony along, yet the Oscars telecast seemed to conceive of movies as Lina Lamont did in Singin’ in the Rain, bringing joy into the “hum-drum lives” of movie audiences, rather than providing a glimpse into what these film professionals consider quality production. Major exceptions were Art Direction, whose clips transitioned from a charcoal drawing or watercolor into the image’s cinematic twin CLIP – Art Direction and the Jean Hersholt Humanitarian Award, which illustrated the industry’s commitments to health care and preservation.

An annual example of missed opportunity is the Scientific and Technical Awards, which continued their legendary marginalization at the Oscars. Scarlett Johansson announced the sci-tech awards from a balcony, referring to the “exclusive dinner” (held on Saturday, 12 February) where the awards were given. Although 15 sci-tech awards were presented at the banquet, the Oscars telecast focused on two achievements: the decades long development of the Louma crane and remote system; and the Gordon E. Sawyer Award presented to Takuo Miyagishima “for a lifetime of accomplishments” (of which not one was identified). There were a few shots of the Louma crane in action, but the segment barely hinted at what the Louma crane does, how it does it, why the Academy cares or why the movie-goer should care CLIP – sci-tech. The Oscars might direct interested viewers to a “read more about it” web address, like PBS does.

For the animation short award, the Oscars did not show even one frame from any of the nominated films. We are asked to merely accept the Academy’s word for it, that these films were worthy of nomination. In his winner’s speech, Chris Landruth complimented the Academy for “continuing to support short filmmaking in all its forms. I can’t tell you how cool that is.” While the Oscar categories support short films, the Oscars telecast didn’t show even a hint of why, in its wisdom and expertise, the Academy selected these films for these awards. For the documentary short award, clips were projected onto the floor of the stage, which was divided into large squares. The clips were screened on a surface with black lines drawn across it CLIP – clips on the floor. Big blocks and lines may have provided visual interest but they interfered with the presentation of the clips. Unless we attend a major film festival or have a local art house, audiences won’t have an opportunity to see the shorts. If Oscars would show clips, worldwide audiences might be drawn to the short film and encourage distributors and exhibitors to become more open to all forms of film.

It wasn’t only shorts categories and scientific-technical awards that received short shrift in the clips department. For the editing nominations, clips were positioned along the side of the screen, shaped like a twisting strip of film CLIP – editing. In these distorted images, one could divine that shots were cut together, and perhaps begin to glean the editing art of these particular films. The legible visual information in the segment was reserved for putting a face on the usually invisible editor and the title of the film.

The 2005 Oscar telecast gave some brief time to three set pieces (in memoriam, tribute to Johnny Carson, montage of movie history) and more detailed attention to the Jean Hersholt Humanitarian Award. In the Hersholt presentation, the Academy honored film executive Roger Mayer for his work with the Motion Picture and Television Fund and with film preservation. In the process, the television audience learned that the industry provides charitable health care for film and TV workers in need. The montage illustrated nitrate film degrading into powder and showed split-screen before-and-after examples of restoration CLIP – Hersholt Humanitarian Award. The Hersholt Award segment went deeply behind the scenes and beyond production, to present an industry that cares for its people and its history, an on-going humanitarian commitment that viewers might ask organizations like Wal-Mart to emulate.

In his introduction to Visual Display: Culture Beyond Appearances, Peter Wollen writes, “an excess of display has the effect of concealing the truth of the society that produces it, providing the viewer with an unending stream of images that might be best understood, not simply as detached from a real world of things, as [Guy] Debord implied, but as working to efface any trace of the symbolic, condemning the viewer to a world in which we can see everything but understand nothing” (p. 9). The annual Oscars show could be an opportunity for film and TV audiences to participate in an enlightening celebration of cinematic arts and sciences, as co-participants in film culture. Even dressed in tux and gown, the Academy could share its professional knowledge and present its expertise rather than limiting the Oscars to the sheen of commercial cinema, glamour and TV entertainment.