Disappointment and Disgust, or Teaching? 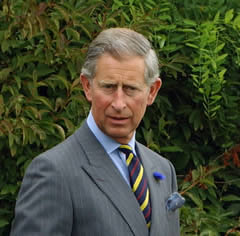 It was that kind of day. I was in London for the conference of the Society for Cinema and Media Studies (SCMS), held for the first time outside of the USA. Was anything quite as it seemed? Knowing that the British press loves to celebrate April Fools Day by publishing spoof stories that fool their readers, I opened The Times (it was that kind of conference). I was quite unable to distinguish actual events from April Fool jokes, especially anything related to the British Royals. On this occasion the Prince of Wales had been recorded having a hissy fit about how much he hated the BBC correspondent, in front of the cameras, which naturally required front-page headlines and a photograph. An April fool, doubtless, but not a spoof. Inside, The Thunderer permitted itself a Leading Article regretting that ‘Textual criticism is no longer the principal discipline’ of ‘our educational overlords.’ Come again? The Times (a scion of the Evil Murdoch Empire remember) praising textual criticism? But this was no joke either. It turned out to be a fit of nostalgia brought on by an academic conference – not SCMS of course, but the Classical Association. Ah, of course: ‘the roots of Western civilisation.’ The Times must be serious.

Another conference – not SCMS but the British Psychological Society – rated a full-page news story. The Times announced that ‘Grumpy old men are just a myth. It’s women who are really raging in old age, research indicates.’ Was this the April Fool? No, it was academic research, whose truth-to-life was demonstrated by the fact that it seemed to illustrate the themes of the British sitcom One Foot in the Grave (1990-2000), and the BBC’s Grumpy Old Men (2002-3) and Grumpy Old Women (2004-5).

“‘Victor Meldrew [lead character in One Foot in the Grave] was the exception and not the rule,’ Jane Barnett, of Middlesex University, said. … She added that the Grumpy Old Women television programme, featuring people such as Janet Street-Porter and Germaine Greer ranting at a succession of irritants, was far better at reflecting reality than its counterpart Grumpy Old Men.” —The Times: April 1 2005, page 5.

Despite so much news about textual criticism and TV shows, there was nothing in the paper about the SCMS. The opening plenary speakers were Charlotte Brunsdon and Thomas Elsaesser. His paper was called ‘Cinephilia’; hers was called ‘Poor Old Television.’ A theme linked the two. Brunsdon spoke of the ‘teaching of disgust.’ Elsaesser spoke of something he called ‘disappointment,’ that formed what he said was the ‘core of the discipline.’ This was the moment when ‘love’ (behaviour) turned into ‘teaching’ (thought); when tacit knowledge and personal experience (going to the movies), was transformed to explicit knowledge and critical discourse (reading Screen). The trigger for such alchemy, it seems, is disgust.

Brunsdon focused on a couple of recent instances that highlight television’s public repute. The first was fictional, a clip of Hugh Grant and Nicholas Hoult watching TV in the 2002 movie About a Boy. Brunsdon observed how the scene sets up TV in opposition to Grant’s character’s self-regarding cool, despite the fact that he spends all day watching it. This is ‘poor old telly’ – the perpetual bad object, first of Culture, then of Theory, now of Digital Media. So critical ‘disappointment’ with television appears never to have been preceded by ‘love.’ If there were such a thing as ‘telephilia’ it would not be a fine upstanding manly affection like Elsaesser’s cinephilia but – as Brunsdon pointed out – a feminised and domestic symptom of social pathology, loved only by fools and not only in April.

The other clip she showed was from factual television – the Channel 4 series Jamie’s School Dinners. Brunsdon showed a clip of celebrity TV chef Jamie Oliver ‘teaching disgust’ to children who like junk food such as chicken nuggets. Oliver prevailed by performing what can only be described as a close textual analysis of the nuggets. He laid the ingredients out on the table – not lovely legs and breast but slugs and snails and puppy dogs’ tails and mechanically processed carcasses and skin and white powder. Then he put them through the blender. The horrified children’s innocence turned to experience. Disgust and disappointment precipitated not only teaching but also learning. They started to eat what was good for them rather than what they wanted.

Brunsdon expressed doubt that the Jamie Oliver episode represented the kind of television pedagogy I espouse in Uses of Television. And maybe so, because my preferred model of schooling is based on ‘desire’ rather than ‘fear’; i.e not pathologising but liking the object of study. Jamie Oliver himself apparently prefers a pinch of fear: “‘A constructive amount of fear in a school was always a good thing,’ he says. We are beginning, I tell him, to sound like two grumpy old codgers. He shrugs, as if to say he has much to be grumpy about.” (Interview with Jasper Gerard; The Times February 20, 2005.)

However in one respect I do want to claim Jamie’s School Dinners for my kind of TV pedagogy. He uses the entertainment format of lifestyle/reality TV as a device for enlightening the population, and via them the political sphere, about the need for healthy diets among schoolchildren. And the impact of his show on public policy in the UK was ‘educational’ to the point of miracle. Oliver collected over a quarter of a million signatures on a petition for better school meals. Even before he had presented it to the Prime Minister, the Government announced a £280m funding increase, including a £60m School Food Trust to train ‘dinner ladies.’ 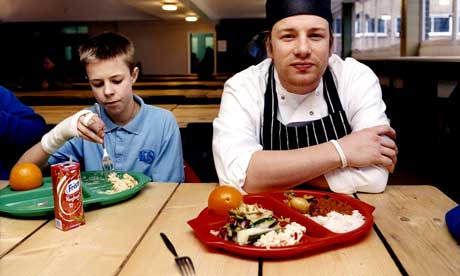 The day following this coup, a news story appeared in the Independent announcing that Oliver was to be adopted as the Conservative Party candidate in the seat of Arundel. It had recently become available because the incumbent had been sacked by the Tory leader. Jamie’s astute, can-do celebrity made this story shockingly plausible, including the revelation that his ‘progress towards election in the Tory heartland, which boasts a 14,000 majority, will be made into a documentary by Channel Four.’ But this one really was the April Fools joke (Independent, April 1, page 3). And it fooled us all, including Charlotte Brunsdon and I, who exchanged startled ‘disappointment’ if not ‘disgust’ at the very idea of it. Full marks to the Independent.

But that’s not quite the end of the story. This being television, the repeat of Jamie’s School Dinners was already on Channel Four even as Charlotte Brunsdon analysed it at SCMS. And now Jamie’s set to go global. The series has been sold to twelve countries, including Australia, Canada, Germany, Denmark, Thailand, Sweden, Hong Kong, Slovenia and Finland. The big target is the USA: “It is in America, the spiritual home of obesity, where the demand for healthy eating television is greatest. US networks will bid for Jamie’s School Dinners at a television market in Cannes next week.” World gets a taste for Jamie’s menu, Adam Sherwin, The Times April 4, 2005.

Jamie’s School Dinners can be seen as celebrity populism, but it is also a good example of how television can teach, not by inspiring fear, disgust or disappointment in its audience but by recruiting them to a useful public campaign. It uses a familiar format to turn consumers into active citizens. It looks like lifestyle/reality TV, but Oliver is impressively willing to bring the viewer with him on the thankless slog through institutional complexity and defensive hostility. The odds always favour the failure of his efforts to win the grudging consent of the education authority, kitchen workers and reluctant clients. You can see exactly why they don’t want to adopt his expensive, time-consuming, hard-to-scale ideas, even as the kids dump his food in the bins.

When things do start to improve, it is clear that they need not have. That’s what makes it good teaching, good television. And beyond ‘poor old telly,’ the miracle of a real outcome; not government funding or political gain (mere foolishness of April), but something harder to make: a new awareness, shared among schoolchildren, citizens and education authorities, that they can do better, for and by themselves.

So here’s a question on which I invite the comment of Flowers (those who Flow): Is ‘disappointment’ and ‘the teaching of disgust’ the ‘core of our discipline’? Or might teaching better be accomplished by inspiring positive civic action. Either way, doesn’t reality TV do it better than we do?