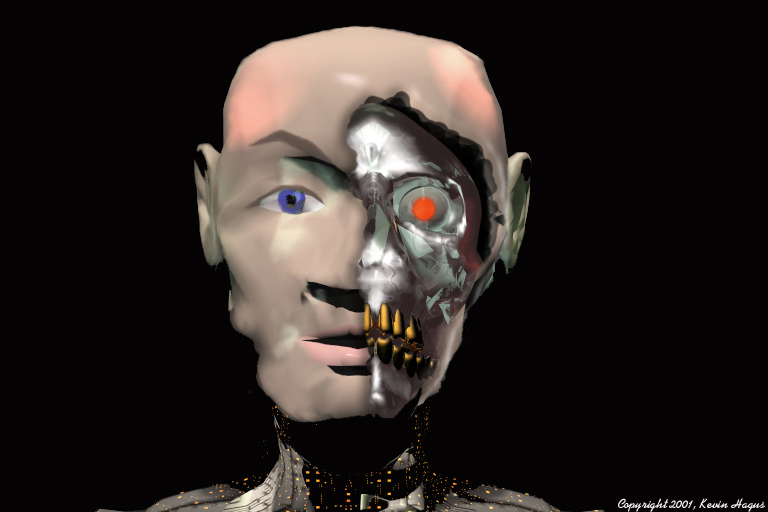 In an article published in 2002, “Cyborgs in Cyberspace: White Pride, Pedophilic Pornography, and Donna Haraway’s Manifesto,” I simultaneously embraced and critiqued Donna Haraway’s “A Cyborg Manifesto: Science, Technology, and Socialist Feminism in the Late Twentieth Century.”[1] Like many other poststructurally-leaning scholars, Haraway and her work greatly informed my thinking about both the possibilities and the limits of critical theory in addressing the power of mediating technologies. “Her cyborg is a poetic vision and socialist plan for action,” I wrote, “a manifesto of the highest signifying order.” Yet I critiqued this paradigm-breaking theorist’s “blasphemous” and “ironic” metaphor as strikingly naïve and implicitly binary: it relies subtly on a notion of gender that gives the mothers of cyborgs the benefit of the doubt, condemns their fathers en masse for structuralizing the past, and neglects the myriad ways in which all people, at least in the United States, are represented by and live under the hegemony of whiteness.

Under the blasphemous notion of “hate,” “Cyborgs in Cyberspace” associated Jeff Black’s neo-Nazi website, Stormfront.org, with racialized, quasi-pedophilic pornography linked to Persiankitty.com. I saw in these sites the persistence of a perverse form of whiteness that rests comfortably but tenaciously on the violent degradation of people of color, adults and children alike. “Hollywood films and television, not to mention the more disturbing texts of the pornography industry,” I continued, “are claiming cyberspace as their own and bringing with them a history that still requires rigorous critical confrontation despite new paradigms.” My point was not to call for the rejection of the cyborg metaphor — an imaginative tool for critical activism, to be sure — but to suggest that models for critiquing systems of oppression such as racism in the media often fail for lack of textual, historical, and ideological specificity. There is a history to the articulation of race online, and this history requires the commitment to a persistent critical intervention that refuses belligerently to take the side of a particular gender, theoretical possibility, or established line of scholarly debate.

Criticizing pornography for perpetuating “hate speech” is a blasphemous act for a scholar against censorship. Calling a text “hateful” can be read easily as closing it off to alternative or resistant interpretations, for it can oversimplify the way audiences direct the meaning-making process. Yet the fact remains that pornography, like cinema and television (“money shots” and “meat shots” notwithstanding), engages in articulations of race easily described as hateful.

Nevertheless, “radical sex” scholars — paradigm-breakers, to be sure — often ignore the problem of race in pornography. They are against censorship as much as they are against racism, misogyny, and child pornography. With telling insight these scholars open up for analysis the complexity, imagination, and subversive dimensions of pornography. Making comparisons to classical Hollywood musicals, for example, Linda Williams argues persuasively that men and women share in the pleasure and sexual liberation offered by pornography. For Williams, men in pornography are not always already involved in the exploitation and degradation of women. Instead, pornography subverts Victorian notions of sex by facilitating complex forms of pleasure. She shows us that pornography is not strictly about or for men in the same way that melodrama is not strictly for or about women. Williams does not see pornography as a form of hate speech and as such does not call for its censorship.

Although I agree with many aspects of the radical sex position on pornography, specifically its resistance to censorship in favor for a more nuanced understanding of the genre, I also find problematic the fact that its arguments about the genre’s progressive and subversive elements come at the expense of its regressive and hegemonic articulations. One can critique the racist, misogynist, and homophobic aspects of pornography and call for media literacy without advocating censorship or aligning oneself with moral zealots. The radical sex analysis of pornography’s complexities and pleasures neglects the ideological dimensions of complexity and pleasure. Complex texts can include stereotypes and myths that work diligently against resistant or enlightened readings. Pleasure can be motivated by and lead to troubling ideologies.

Assuming pornography cannot escape the prevalence of racism in American society — even (especially) in the absence of colorful bodies and interracial stories — we might rightly ask: what is it about this genre, critical theory, or scholarly interest that facilitates this degree of oversight? What is it about race that complicates or undermines the application of various principles of critical theory to the study of pornography? In a world fraught with media complexity and otherwise expansive paradigms why can’t we call a spade a bloody shovel?

Notes
Daniel Bernardi, “Cyborgs in Cyberspace: White Pride, Pedophilic Pornography, and Donna Haraway’s Manifesto,” in James Freidman, ed., Reality Squared: Television Discourse on the Real. New Brunswick, N.J.: Rutgers UP, 2002;
Donna Haraway, Semians, Cyborgs, and Women: The Re-invention of Nature. London: Free Association, 1991.
For a provocative case study of the intersection of sex, race and cold war anxiety in comics positioned as pornographic, see Andrea Friedman, “Sadists and Sissies: Anti-pornography Campaigns in Cold War America,” Gender & History, vol. 15, no. 2 (August 2003): 201-227.
As Williams explains: “In both cases I have resisted some of the more gendered reactions to both, especially the assumption that melodrama is an inherently feminine form designed for women and that pornography is an inherently masculine form designed for men. While initially useful, neither of these views is adequate or productive of deeper understanding of these forms. Indeed, conventional attitude toward both have contributed to my own sense of distances form orthodox feminist film and media study.” Linda Williams, “Why I Did Not Want to Write This Essay,” Signs: Journal of Women in Culture and Society 30.1 (2004): 1269.