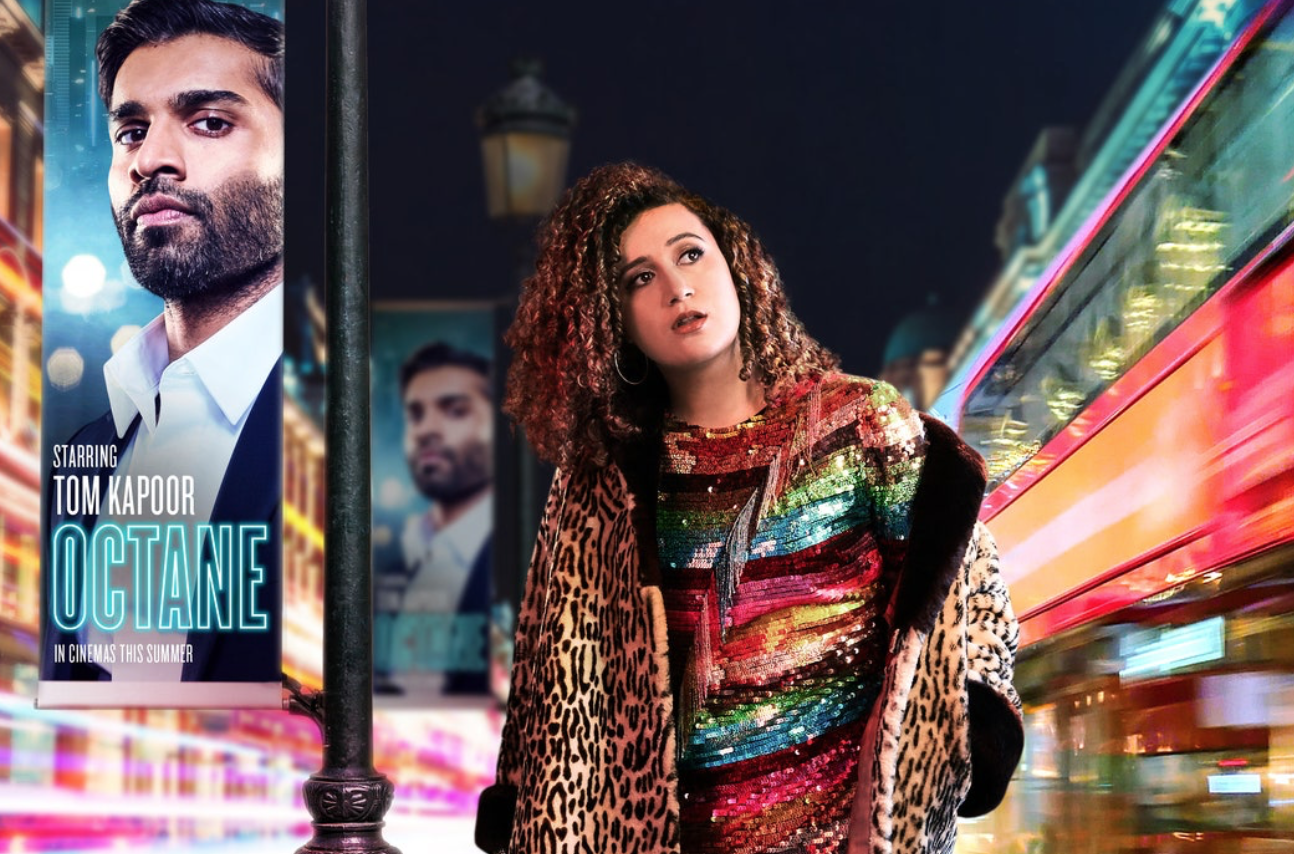 A promotional image from Starstruck centers Rose Matafeo amidst a London street, while Nikesh Patel’s star image hangs aside her.

Gender and genre are rich intersecting avenues of exploration in feminist television (specifically) and media studies (broadly), from explorations of the gendered genres, audiences, labor, and authorship. On first glance, the discursive association of Rose Matafeo’s Starstruck (BBC/HBO Max, 2021-) to classic filmic romantic comedies may lead to assuming this proximity to cinema is what determines the series’ acclaim for critics and audiences. Of course, romance, and romantic comedy, are often devalued as gendered genres (for further reading, see: References). Starstruck finds itself in the tradition of a series such as Broad City, in which co-creator/star Illana Glazer is less concerned with romantic closure or monogamy, and more interested in self-exploration and friendship. In this way, genre hybridity, the romantic comedy is blended with post-network Millennial “coming-of-age” series. Yet the latter suggests an emphasis on episodic slice of live through mishaps and triumphs, while the former establishes continuity through a serialized “will they or won’t they?”

Matafeo, however, like women media authors before her, chooses the familiar genres and its devices to provide a tongue-in-cheek critique of contemporary gender politics of celebrity and film culture. The series mixes and mashes classical tropes with contemporary dilemmas, all while placing comedy and late twenties identity crisis, at the forefront.

Despite how the general premise of Jessie’s one night stand with a famous film star suggests all the trappings of the fantasy portion of the series, the protagonist appears to fall in love with Tom Kapoor (Nikesh Patel) despite his star status. If Season One functions as a “Will they or won’t they?” narrative, both characters are given the same agency over the outcome. If anything, Jessie’s weariness of Tom’s celebrity and subsequent exits dominate the narrative. As Matafeo stated in a Harper’s Bazaar, she does not worship at the altar of stars:

I really love celebrities, but I find them a novelty. I don’t revere the concept of celebrities, necessarily, and I think that Jessie is a bit the same. We’re both obsessed with movies, which is definitely a thing I just got in the script because I like to talk about movies. Her sense of humor, as well. I write Jessie to be a character that I think is funny. I don’t want to say that I’m funny, because that’s the worst thing.

Clearly, Jessie is an outlier, as the series indicates that any other character in Tom’s orbit (save his parents and brother’s cameos in Season Two) are consumed by his fame. Watching the pilot through Jessie on a lackluster New Year’s Eve in London, we see she does not recognize Tom at first, or second, glance. The pleasure of Matafeo’s own public persona and Jessie as both confident yet neurotic first comes to light in a taxi to Tom’s flat, a refreshingly hilarious sex scene, and morning after sequence. It isn’t until then that Jessie learns of Tom’s fame, which leads to her first of many sudden exits in the uncertainty that drive the ensuing six episodes.

Interviews with Matafeo focused on the romantic comedy genre and authorship. While Matafeo admits the concept of the series is rooted in fantasy not personal experience, her status as author and star continues to associate the series as autobiographical. She both pays homage to her beloved romantic comedy genre and provides a style that foregoes pastiche. This may be why enthused critics call Starstruck a screwball revival, which also lends itself to feminist film histories of genre, stardom, authorship and industry. As Maria San Filippo states in the introduction to her recent edited collection, After “Happily Ever After”: Romantic Comedy in the Post-Romantic Age:

With movie studios preoccupied with churning out superhero sequels, family-friendly animation, and horror reboots, the peak TV era of proliferating niche programming and ‘quality television’ has given romcom a much needed makeover, with television’s key attribute, seriality, providing an invaluable resource for explorations that go beyond ‘happily ever after.’

Indeed, Starstruck will not commit to the notion of “happily ever after” as a potential outcome. At least, not quite yet. If every season finale presents the possibility of closure, each ensuing series opener shows a crisis of faith. 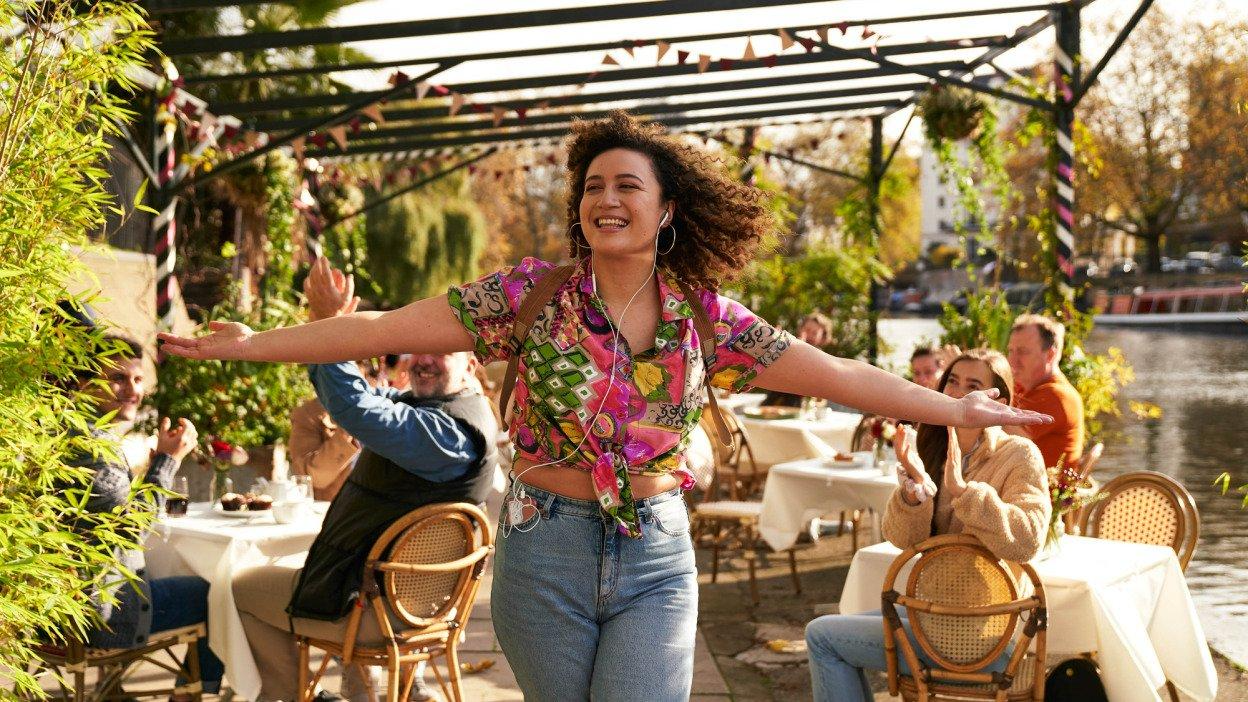 Jessie breaks out into dance (balancing the diegetic and non-diegetic soundtrack) to Mark Morrison’s “Return of the Mack” after another one night stand in Season One of Starstruck.

Starstruck is also emphasized by press as a love story centered on Tom, a Londoner of South East Asian descent and Jessie, Half-Samoan, half-white New Zealand native. Matafeo was also the first person of color to win for a solo show at Edinburgh’s Fringe Festival, another frequent accolade mentioned in her profiles. Yet her willingness to discuss gender and genre help steer away from conversations on her contributions or thoughts on diversity. Further, in a Harper’s Bazaar interview, when asked how she propels the romcom genre, she claims to want to add to the canon or “vault,” the rare inclusion of New Zealanders, and adding more brown characters. In a Vanity Fair interview, she cites an understanding of popular misogyny as a potential reason for the devaluation of romantic comedies: “People don’t realize that some of the best films ever made are rom-coms.. They piss on the genre if they hear it because they hate women, I guess? So yeah, I think we’ve gotta revitalize that genre.”

Again, as most popular press explores (and often probes Matafeo), the two unexpected lovers’ fate remains uncertain, as much as they feel ambivalent about their individual futures. Jessie balances job precarity between a hybrid cinema and cafe, a part-time nanny, and later, work at a florist and local library. In stark contrast, Tom travels for international film shoots, takes meetings with his blunt agent (played with aplomb by Minnie Driver), and begrudgingly embarks on a promotional relationship with his co-star. 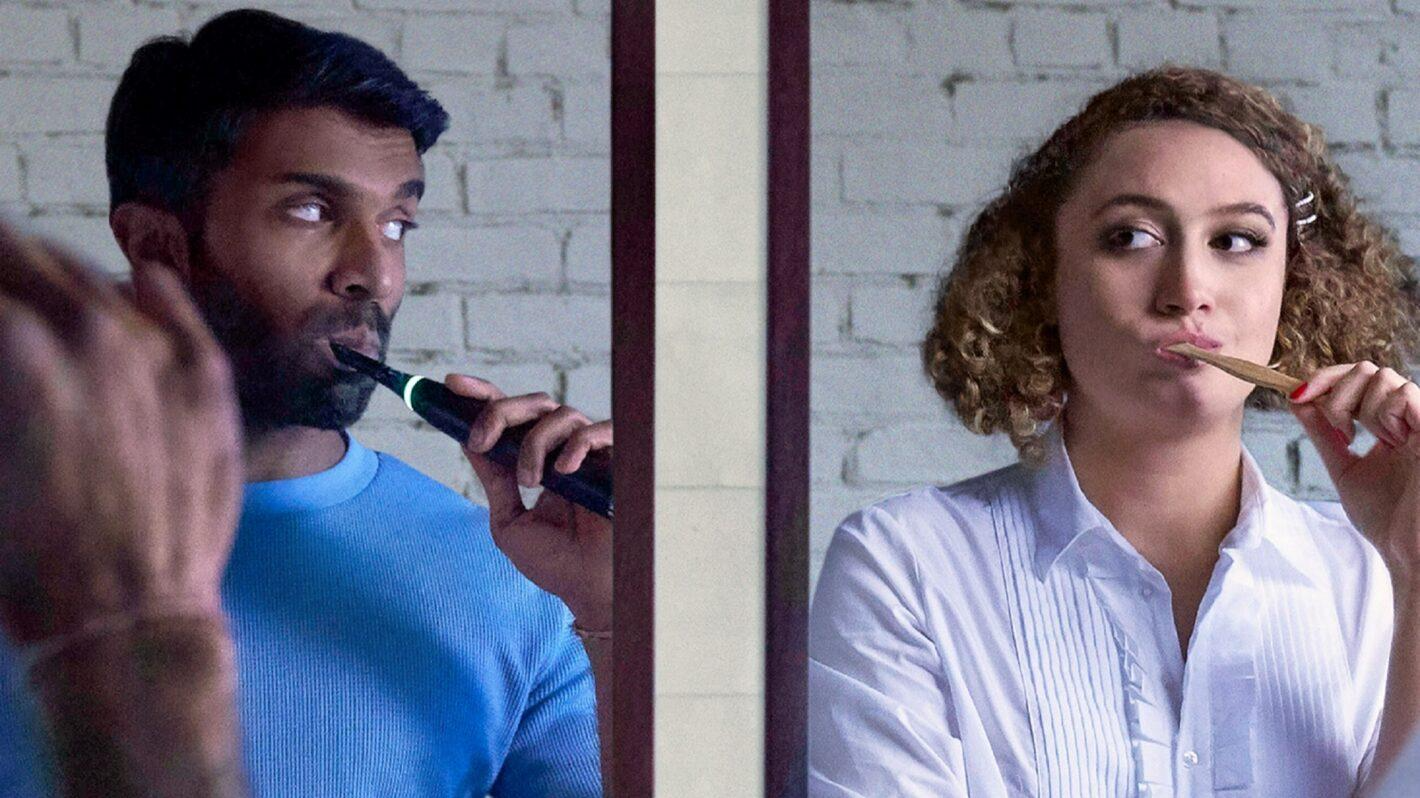 Season Two of Starstruck challenges the potential for a happy ending through Jessie’s trepidation over her new relationship with Tom, keeping viewers asking, “will they, or won’t they?”

One of the most potent scenes of chemistry occur in Season One, Episode Two, as the two attempt to sit down for a conversation at a nearby pub, only to find they are both consumed by providing unsolicited answers to a pop culture trivia night. First, Tom answers subtly to the actor who played the titular Father Ted series, Dermot Morgan. After establishing their mutual love of pub quizzes, and Jessie tells of her competitive nature, she cannot refrain from yelling “Zsa Zsa Gabor” to the quizmaster. The chemistry between the actors, and skill of the actors, is undeniable in these scenes where they spar as equals. The scene escalates as Jessie, the cinema worker, and not Tom, the actor, instantly answers the question to list three actors from 1983’s The Outsiders with both nonchalance and zest, eight names: “C. Thomas Howell, Patrick Swayze, Ralph Macchio, Emilo Estevez, Tom Cruise, Rob Lowe, Matt Dillon.” Yet the series is hardly saturated by these moments of cinephilia, but subtly sparse like Easter eggs for those paying attention. Matafeo’s scenes in the cinema café, in particular, show a delightful unwillingness to engage in hierarchal debates on film. 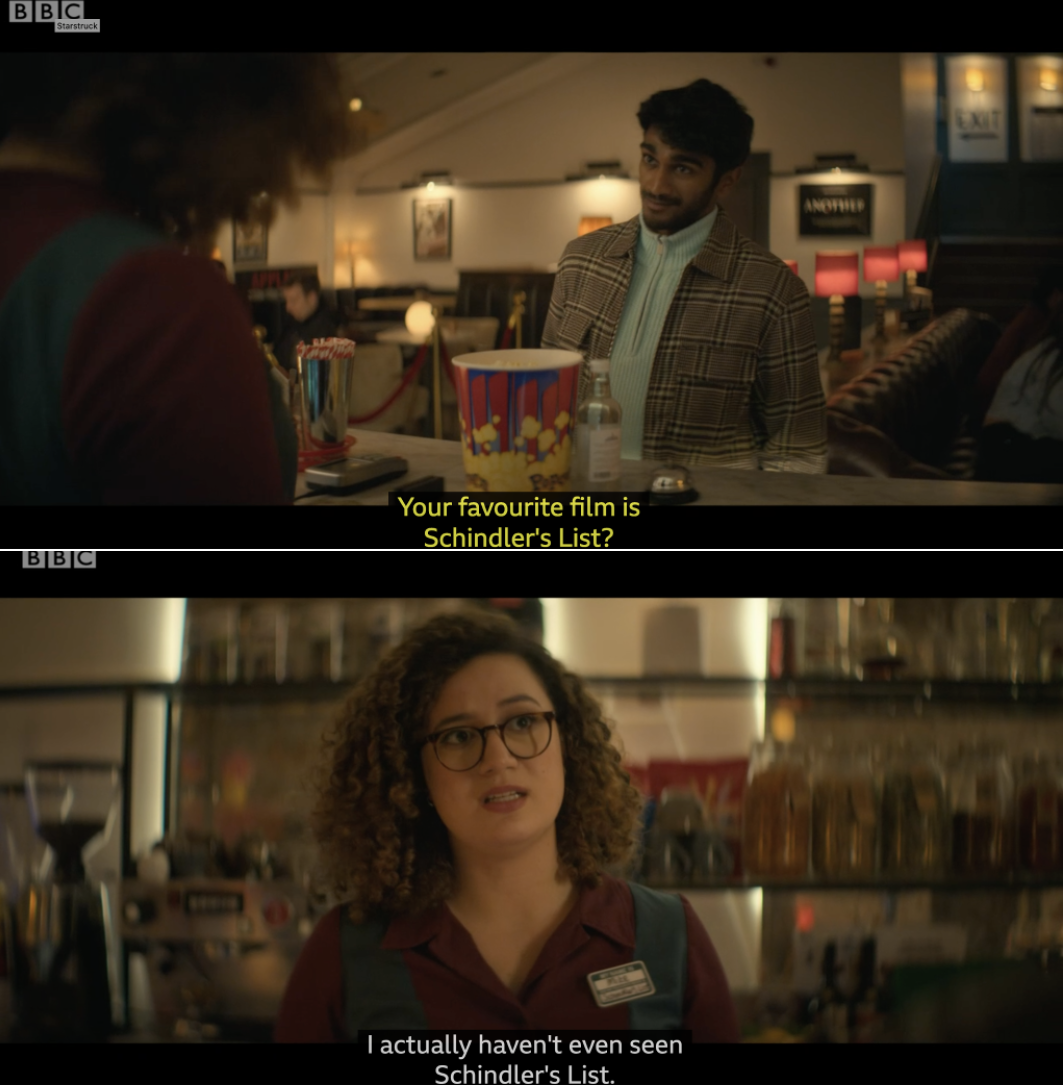 Jessie calmly taunts a patron at the trendy Cinema cafe where she is employed. 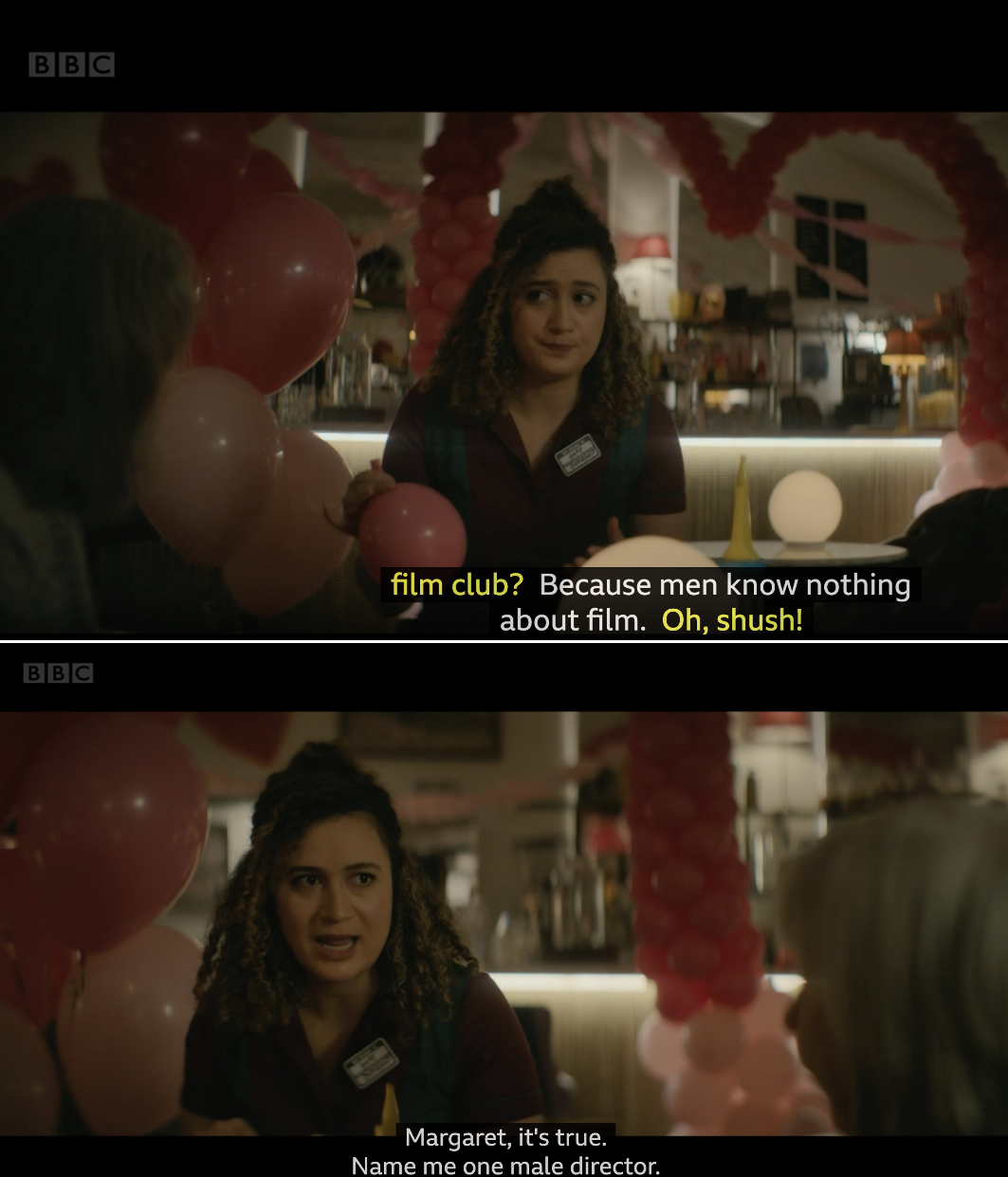 Jessie finds joy with an all women, senior citizen film club, in which she continues to question masculine domination in film culture.

Just as Matafeo, and by extension Jessie, are not consumed by their proximity to celebrity culture, the creator-star graces her onscreen counterpart with an unabashed pretentiousness towards film. Matafeo does not give into a hierarchy of romantic comedies, nor does she find it necessary to speak to the “cinematic” nature of her series (as can so often the case with other creators and showrunners). When asked of her influences, she recounts Richard Linklater’s Before trilogy, Bridget Jones’ Diary, When Harry Met Sally, Nora Ephron films, and The Graduate, Sweet Charity, and His Girl Friday.

Matefeo also emphasizes the collaborative nature of authorship, often crediting her co-writer Alice Snedden and the importance of finding Patel as the perfect actor for Tom:

So it was pretty special when he came in and, you know, when you start reading with them, you’re like, “Oh, my God, I can see you in all of these other scenarios and these scripts that were written.” Apologies to all of the men I rejected through the casting process, but I see it as revenge in some way.

While Matafeo and her onscreen proxy may not buy into celebrity fantasy, it appears that the making of Starstruck, and the agency it provided, is the real fantasy turned real. By focusing on a singular concept and personalized story, Matafeo crafted a charming and endearing new take on the filmic romcom, in a serialized televisual form. All the while, she refuses to be acknowledged as “other” based on her body or ethnicity. While television itself is only subtly mentioned in the series, in which Tom’s brother claims all actors now work with the medium, I suspect Matafeo herself is still gaining a grasp of the transnational global streaming industry, as increasing privatization threatens the potential for British television’s future. 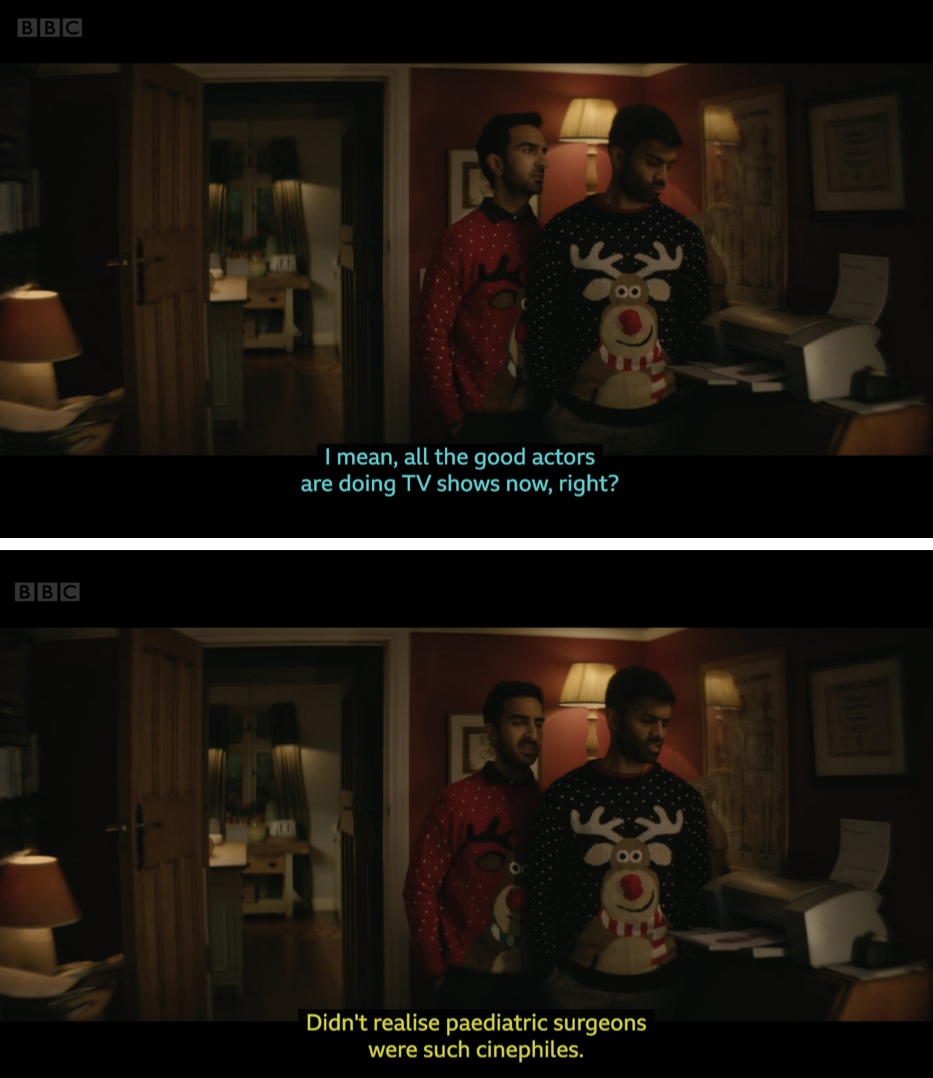 Tom struggles with high paid yet unfulfilling film roles. He does not receive star treatment from Jessie or his family, including his brother, shown here.
Image Credits: References:

Rowe, Kathleen. The Unruly Woman: Gender and the Genres of Laughter. Austin: University of Texas Press, 1995.