I Know That Song! Black Fans and the Familiarity of K-pop
Dayna Chatman / University of oregon

When I first began listening to K-pop in late 2014, I was struck by the familiarity of the music. One of the first K-pop music videos I watched was Rain’s “30 Sexy.” The music video features styling, choreography, and vocals that simultaneously brought to mind Black American artists Prince and Michael Jackson. As I continued to listen to K-pop, I began to realize that I was not simply projecting onto idols a memory of Black artists. K-pop, by design, is a hybrid genre that incorporates a variety of Western music genres (Lie, 2012), but R&B and hip hop have been especially influential to the development of the genre. In Crystal Anderson’s (2020) Soul in Seoul: African American popular music and K-pop, she writes that K-pop signals its connections to American R&B and hip-hop traditions through citational practices which draw on vocal styles, instrumentation, visuals, and performance aesthetics found in those genres. This post explores some of the citational practices of recent K-pop songs and music videos while also examining Black fans’ responses to such practices via YouTube reaction videos.

Reactions to K-pop music videos are roughly separated into three parts (Kim, 2015). First, there is a brief introduction where the reactor welcomes viewers and provides details about the music video they will view. The second part constitutes the most extended portion of the video: reactors watch and respond to the music video. There is often variability in this second portion of reaction videos. Some reactors watch a music video all the way through without commentary. Others may pause throughout to discuss various elements, including the music, idols’ wardrobe, the choreography, the visual aesthetics, etc. K-pop reaction videos conclude with reactors offering their feelings, interpretations, and evaluations of the music video (Oh, 2017).

K-pop fans use these videos to promote the artists they like, connect with the global fan communities, and develop a fan following (Kim, 2015). David Oh (2017) describes those who gain a following on YouTube due to their K-pop reaction videos as “celebrity-fans.” Black K-pop celebrity-fans—primarily from American and the UK—are growing in visibility on YouTube. I focus on Black fans in an effort to situate this community within fan and fandom studies as others have recently done (see Chatman, 2017; Martin, 2019; Wanzo, 2015; Warner, 2015; 2018).

Black K-pop fans become excited and, sometimes, nostalgic when they encounter K-pop songs that sample instrumentals and melodies from American artists. This was the case when SHINee released their music video for “Good Evening” in May 2018. SHINee is a five-member group that debuted in 2008 as a contemporary R&B band under SM Entertainment. Despite being labeled an R&B band, the group is known for easily adapting to various genres, including rock, pop, deep house, and hip hop. “Good Evening,” described by SHINee’s label as an electronic pop track, was written and arranged by American record producers The Fliptones. However, there are R&B elements in the melody and vocals in “Good Evening,” which generated an enthusiastic reaction from some fans.

Forty-two seconds into the music video, the pre-chorus begins. Jess, from TheJessLyfe (2018), stops the music video, pauses for a few seconds, and then, with a furrowed brow, looks directly into the camera and asks: “Do ya’ll hear that?!” (2:41). The “that” to which she refers is the vocal melody sampled from the song “Cupid” by the American R&B quartet 112. Like Jess, other fans expressed surprise by first pausing the music video, then looking at the camera and asking for confirmation from viewers (see Dezzy March, 2018). Others noted the familiarity of the vocal melody in “Good Evening” but could not pinpoint the song (see 2MinJinkJongKey, 2018). One fan even searched for the song on YouTube and played the chorus to confirm his guess (see BRISxLIFE, 2018). In several reactions, the recognition of 112’s “Cupid” was followed by fans singing the original lyrics while snapping their fingers or swaying along. Identifying the “Cupid” sample seemed to further heighten fans’ interest and enjoyment of “Good Evening.”  Unlike instances of cultural appropriation in K-pop that bring criticism, the reactions to SHINee’s “Good Evening” indicate that the inclusion of musical elements from Black artists is welcomed by Black fans. Additionally, these fans make their viewers aware of the connections between African American musical traditions while exuberantly reflecting on the Black music artists they’ve encountered.

Besides the sampling of music, the citational practices of African American musical traditions in K-pop are evident in the visual aesthetics of music videos and performance styles. EXO member Baekhyun’s latest song, “Bambi,” and its music video (see SMTOWN, 2021) generated ardent response from fans as they interpreted elements of the song, styling, and choreography in relation to several Black music artists. The music video begins with a shot of Baekhyun wearing a black suit and tie with a white shirt. He leans casually against a wall at a train station flipping a coin in his gloved hand. After the title card fades away from view, a silhouette comes forward. A light shining in from a window reveals Baekhyun with a black fedora. Upon viewing this scene, fans screamed: “Michael Jackson!” (see Christina & Ed, 2021; Dezzy March, 2021; Hey Charlie, 2021; ItsRaffy!, 2021; JREKML, 2021). Several fans interpreted the visual elements of the opening scene in connection to Michael Jackson’s “Smooth Criminal” music video (see Michael Jackson, 2010). In that music video, Michael Jackson’s silhouette is seen at the end of an alley before he comes into view wearing a white suit accompanied by a white fedora. 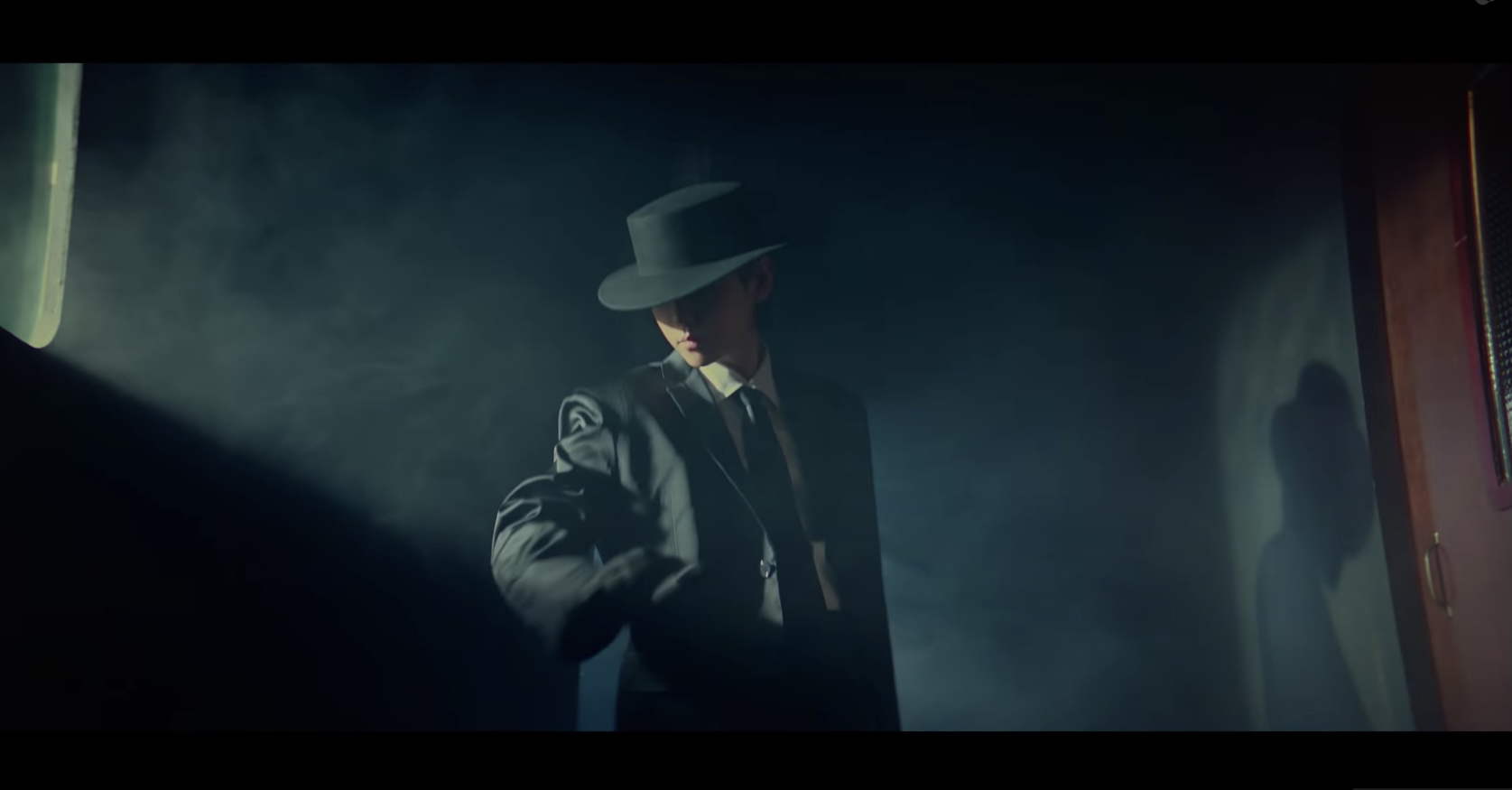 Beyond the reference to Michael Jackson, Baekhyun’s dance performance was also interpreted intertextually in relation to other Black musical artists. One fan makes it forty-eight seconds into the “Bambi” music video before pausing it and asking: “What in the R&B, slow jam, Ginuwine, Tyrese, Chis Brown, freakin’ Montel Jordan is this?!” (ItsRaffy!, 2021, 4:12-4:19). For JRE from JREKML (2021, 5:52), a scene in which Baekhyun and two female dancers transition into a wide squat and begin to slowly rotate their hips (see SMTOWN, 2021, 2:42) conjured up the image of Ginuwine’s “Pony” music video (see GinuwineVEVO, 2014). Fans also commented on the familiar R&B instrumentation and Baekhyun’s vocal runs (see Christina & Ed, 2021; Dezzy March, 2021; Hey Charlie, 2021). Through their commentary in reaction videos, Black fans who are well versed in African American music genres authenticate K-pop performances (Anderson, 2016).

Black K-pop fans’ reaction videos reveal the way they re-encounter African American musical traditions through K-pop. What is significant about many of the reactions is that they do interpret these K-pop music videos that emulate the vocal and performance styles of R&B as an apportion of Black music culture. In contrast, white American music artists whose careers have thrived because they emulate Black music genres have been subject to criticism. While this analysis, focused on reaction videos, cannot explain why some Black K-pop fans embrace the emulation of African American musical traditions and performance style in the genre, the fact that they do so is relatively unique. It therefore merits future consideration.