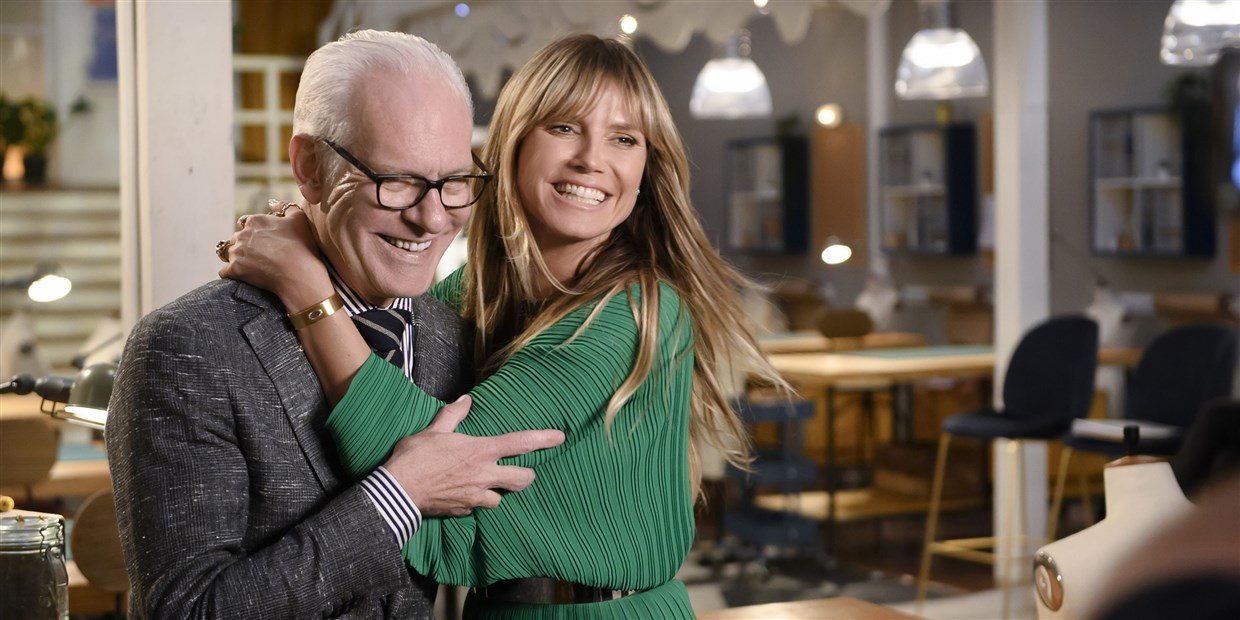 On March 27th, 2020, Amazon Prime entered the world of fashion reality programming with Making the Cut (Amazon Prime, 2020-present). Making the Cut is the second fashion design competition to debut in 2020 following the January 29th premiere of Netflix’s Next in Fashion (Netflix, 2020-present). Both shows have been compared to the long-standing gold star of fashion shows: Project Runway (Bravo 2004-2008; Lifetime 2009-2017; Bravo 2019-Present), which just wrapped its 18th season in March. In both series, contestants use their design skills to win their big break in the fashion industry. For Next in Fashion participants, Queer Eye’s (Netflix 2018-present) fashion expert Tan France and model/designer Alexa Chung serve as the show’s hosts and mentors. The winner receives $250,000 as well as the opportunity for their collection to be sold via online fashion retailer Net-a-porter.

Making the Cut has two hosts that are familiar to Project Runway fans: Heidi Klum and Tim Gunn. Klum and Gunn were part of the first 16 seasons of Project Runway but left the show in September 2018 to create a new series for Amazon Prime. According to Klum and Gunn, Making the Cut takes the fashion competition series to the next level. The hosts claim their series is not a “sewing competition,” as compared to Project Runway, where contestants had to design as well as show their apparel. While the contestants are responsible for the designs, they have assistance from seamstresses in Making the Cut.

The show’s objective is to find the next global brand. Contestants are not trying to break into the world of fashion; they have their own labels and stores. For example, Ji Won Choi designed a collection for Adidas Originals and Esther Perbandt is an award-winning designer from Germany who has shown multiple times during Berlin’s Fashion Week. Moreover, the winner will receive a $1,000,000 prize to expand their brand and the opportunity to design an exclusive line for Amazon.

Trailer for Making the Cut

Critical reviews of Making the Cut focus on how the series cannot compare to Project Runway. USA Today called it a copycat and that it “can’t make it work like the original,” referring to a popular catchphrase used by Gunn during his Project Runway tenure.[1] Entertainment Weekly described it as a reboot that “plays like Project Runway if its rich aunt died and left the show her millions.”[2] Yet, what makes Making the Cut different from its competitors is Amazon. Each week contestants design two looks. One is for the world of high fashion while the other is more accessible. Both looks appear on the runway in a weekly fashion show. In each episode, the judges determine a winner and the losing designer goes home. The winning accessible looks appears in the Making the Cut store on Amazon, and each look is priced at $100 or less.

Making the Cut is Amazon’s version of livestream shopping. With livestream shopping retailers interact in real time with customers to sell products. In China, livestream shopping is a billion dollar industry; in 2018, the industry had $4.4 billion in sales.[3] Not only does Klum verbally remind contestants (and viewers) several times each week that the winning accessible look will be for sale in the “Making the Cut” store on Amazon, but also the show cuts to images of the online site.

Amazon Prime releases two episodes a week on Friday. As of this writing, six episodes have aired and all of the winning looks have sold out. However, fans can still make purchases in the store. Fans can buy clothing from the judges such as Heidi Klum’s Intimates line, Nicole Ritchie’s House of Harlow, or Joseph Altuzarra’s Altuzarra line. The store also includes a section of “Tim’s Closet Staples,” which include trench coats, blazers, day dresses, go-anywhere tops, little black dresses, and sweat suit alternatives. 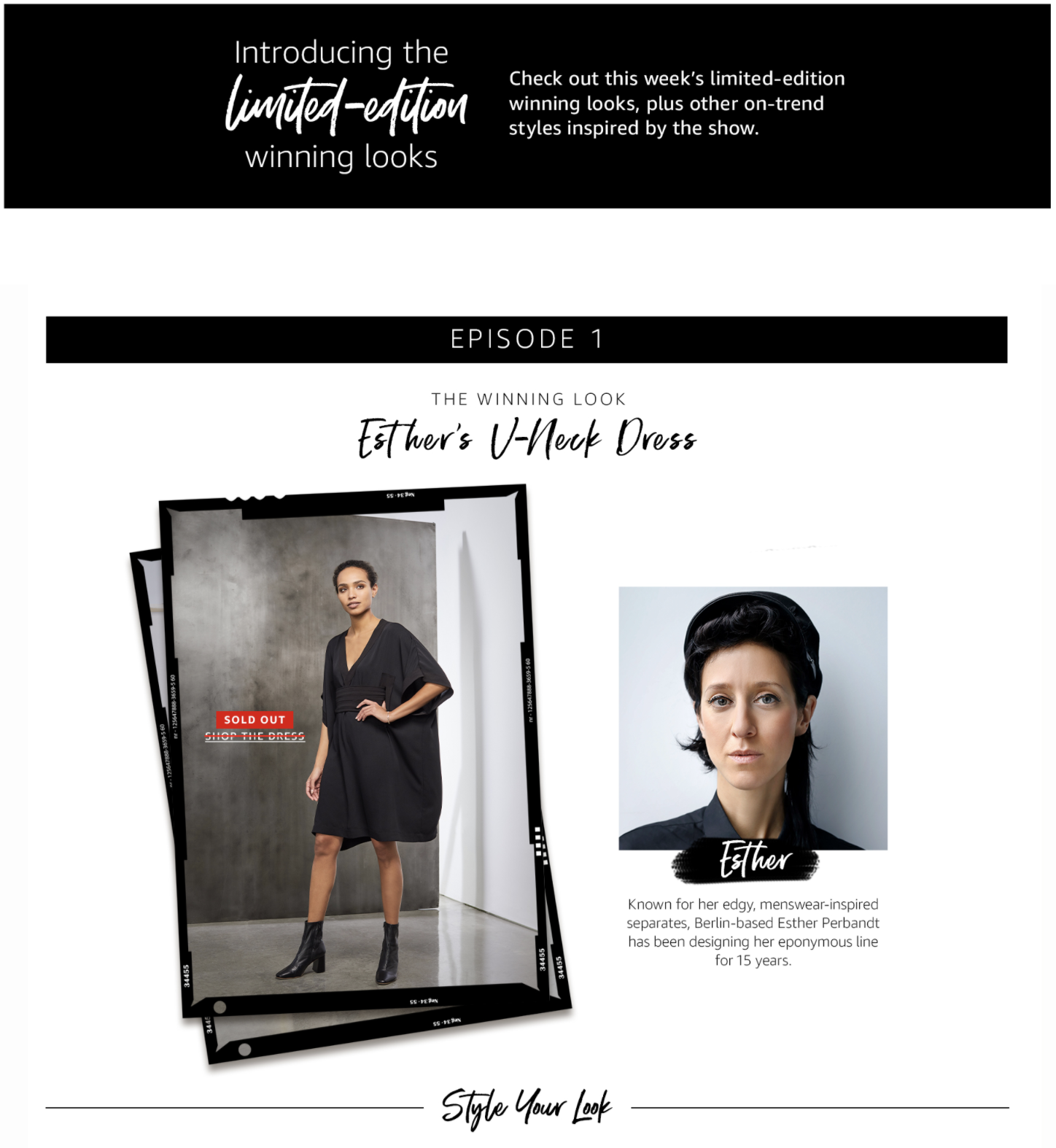 The creation of Making the Cut also helps Amazon. Even though the company is the top apparel retailer in the United States, the company has struggled with getting into the high end, luxury fashion. Making the Cut introduces viewers to the world of fashion with looks priced under $100. Moreover, viewers/consumers have a personal connection to the designers as they learn about the designers’ personal stories in each episode. For example, Ji Won Choi shares her struggle with her Korean identity when her family moved from Seoul to Oklahoma when she was 6. Feeling like an outsider, Ji Won rejected her Korean identity and had people call her “Rachel.”  Once she left Oklahoma to attend Parsons Design School of Design in New York, Choi embraced her identity and made it part of her brand.

The Making the Cut store also has a section called “Standout Styles” which contains looks inspired by the show’s judges, Heidi Klum, Nicole Ritchie, Joseph Altuzarra, supermodel Naomi Campbell, fashion influencer and designer Chiara Ferragni, and fashion editor Carine Roitfeld. The clothes range from $47-$995 and include fashion labels such as Marchesa and Halston.

In addition to the e-commerce element, what makes Making the Cut stand out from the competition is its production. The show’s first episode starts with the contestants meeting Klum and Gunn in New York City. After telling contestants about the competition and prize money, Klum announces that their first show will occur in Paris in front of the Eiffel Tower. In Paris, contestants work in an atelier and explore the city for artistic inspiration. The second runway show occurs at the Musée des Arts Décoratifs. While the designers are working, Klum and Gunn explore the city. In one episode, they go to the Moulin Rouge. At the end of episode 4, Klum tells contestants to pack their bags because they are going to Tokyo. Once there, contestants explore the city such as the Harajuku District for inspiration for the Japanese Streetwear challenge. Designers bring their artistic visions to life at the Amazon Fashion Tokyo Studio. 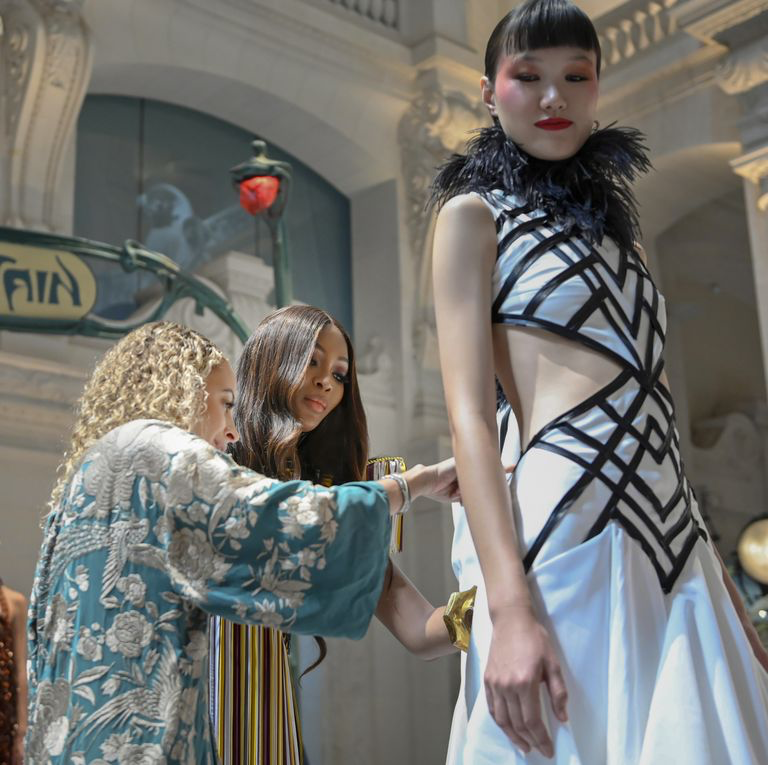 Making the Cut combines entertainment and e-commerce. Other reality shows as well as scripted programs could follow in its footsteps. Viewers have immediate access to products seen onscreen and with Amazon Prime shipping, these looks can be delivered in two days. The contestants, the return of Tim Gunn as fashion mentor, and addition of Naomi Campbell as a judge make the show a much-needed escape. Gunn continues to provide supportive yet constructive criticism via “Tim Talks.” Campbell does not hold back in her role as judge; during one runway show, she tells the other judges that she wouldn’t even put her mother in one particular designer’s accessible outfit. During the haute couture challenge, Campbell tells a designer that she was not impressed with the designs and describes the accessible look as something that she would wear when she goes to the hairdresser.

While confined in their homes, viewers can buy the winning looks as they enjoy the visual imagery of Paris and Tokyo played out using slick programming and editing. By maintaining the joie de vivre of Project Runway and building upon its credibility with consumer consciousness, the producers of Making the Cut have created a new pattern, which will undoubtedly shape the future of fashion and reality television.