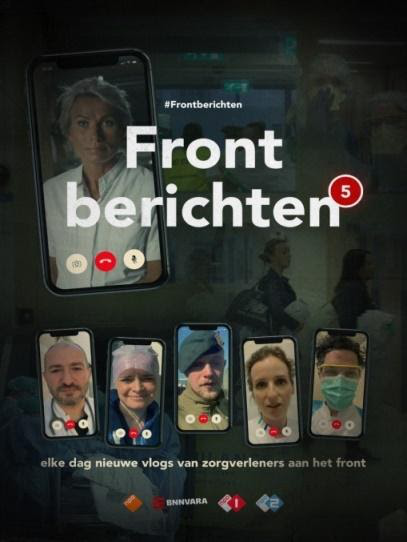 #Frontberichten allows those who work on the front lines to broadcast their messages to the Netherlands and the world.

A striking effect of the COVID-19 crisis that first began in 2020 is an increase of both interpersonal social media and mass media such as national broadcasting. In The Netherlands the news and talk shows on public television have had many more viewers than before the crisis. At the same time new hybrid forms have emerged. While television crews are barely or not allowed into the ‘war zones’ of the COVID-19 crisis, where the battles take place, nurses, doctors, and other people on the front lines are invited to send their own video blogs about the situation. Public broadcaster BNN/VARA has created an interface to upload personal clips from those whose work is crucial in these extraordinary times. #FrontlineMessages (#Frontberichten) is then broadcast every night and offers unique documents of and insights into the crisis. While the streets are empty and the world seems to stay on hold for COVID-19, these video blogs show this invisible fiend’s impact from the perspective of the ‘soldiers’. 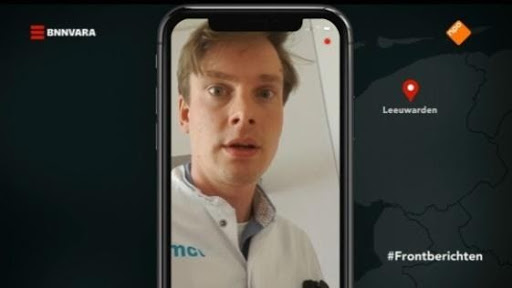 A lung specialist in Leeuwarden appears in multiple episodes. 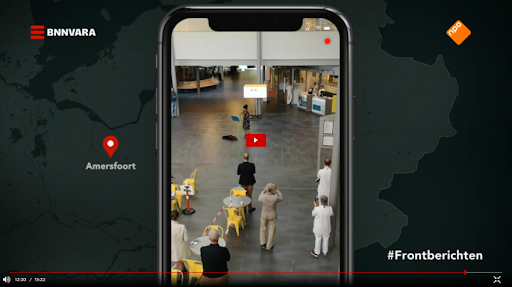 Messages arrive from everywhere in the country and the diversity of people on the front lines who report is startling. Ranging from lung specialists, general physicians, ICU surgeons and ER nurses to hospital cleaners, ambulance and trauma helicopter personal, ex-patients, pharmacists and undertakers to people in other ‘battalions’: teachers in empty classes, military medics and logistic operators, home care assistants, supermarket personnel, distribution center managers, police, and politicians – they all have a perceptive, gripping story and a pervasive message to share. We hear about the loneliness of patients who die alone, their hand held by a compassionate but unknown masked caretaker who talks about this with dignity and sadness at the end of a shift; a shiver may run down the viewer’s spine. The worried faces of a teacher who has lost track of some of his pupils, fearing for those children who have lost their safe space from an abusive home situation; his face speaks volumes. During a nightshift a general physician has to fill out one death certificate after the other. An exhausted anesthetist catches a ray of sun during a break and smiles; she offers a ray of hope. A violinist has traded the concert hall for the entrance hall of a hospital and plays for doctors and nurses who keep their pace and listen to the moving sounds of gratitude and consolation. A pulmonologist on the rooftop of his hospital shows the abandoned airport and the quiet motorway in the distance. He invites us to think about the causes of the epidemic and the possible connection between the rapid spread of the virus and patients’ increased vulnerability related to pollution. He reminds us that we will have to change in order to reduce the likelihood of similar pandemics occurring in the future. When #FrontlineMessages ends at some point in the future, we in the Netherlands and elsewhere will probably all have coronavirus tracking apps in our pockets that also deserve critical reflection and adaptation before implementation. 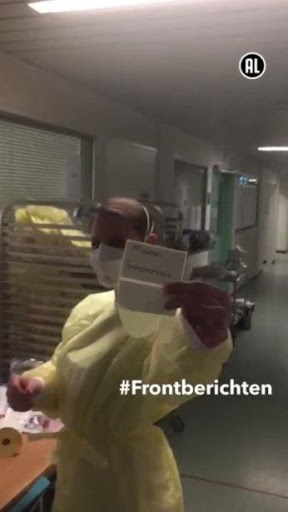 One of the Corona ward cleaners in Manon from the April 8th episode.
Image Credits:
tagged with COVID-19, digital media, mobile media
Flow is a critical forum on media and culture published by the Department of Radio-Television-Film at the University of Texas at Austin. Flow’s mission is to provide a space where scholars and the public can discuss media histories, media studies, and the changing landscape of contemporary media.