Normalizing Subversion: The Comedy Approach of ‘Take My Wife’
Ashlynn d’Harcourt / University of Texas at Austin 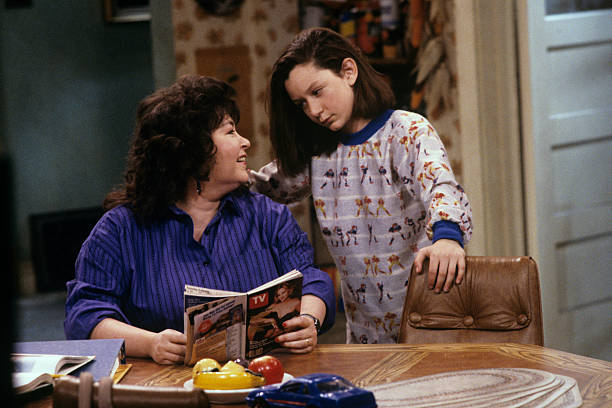 Roseanne Barr and Sara Gilbert in the first season, episode 15, “Nightmare on Oak Street” of the ABC series Roseanne, 1989

In 1989, despite network pushback, executive producer and comedian Roseanne Barr’s self-titled comedy sitcom, Roseanne (1988–1997), aired an episode in which her character’s 11-year-old daughter experiences her first period. This was the first time a network television show addressed the topic of menstruation, and the series included several punchlines about Darlene’s period that make the physicality of the “cramps” and “blood stains” that accompany menstruation tangible. Along with her excessive speech, laughter and liminal status, this is an example of how Barr’s comedy style in the ABC sitcom unsettled social norms in the ’90s; now widely acknowledged to be racist, Barr was considered one of the titular unruly women of her generation of comedy voices. [1]

Comedians Amy Schumer, Ilana Glazer and Abbi Jacobson, and Samantha Bee on the cover of Entertainment Weekly (2015), Out (2016), and Variety (2016) magazines, respectively

As stand-up comics have transitioned from stage to television over the past few years, a range of comedic styles has unfolded. Many women on television today are boldly challenging social and gender boundaries through comedy. Amy Schumer, Ilana Glazer, Abbi Jacobson and Samantha Bee, for example, carry Barr’s unruly comedy torch as much as any of their contemporaries. These comics are providing deeper and more complex representations of women on television; however, not all comedians are bringing their brash stand-up humor from the stage to television. Compare Barr’s insistent inclusion of jokes about menstruation on her sitcom with the contemporary television series, Take My Wife (2016–), which was distributed nearly three decades later on the subscription streaming service, Seeso. In this sitcom, comedians Cameron Esposito and Rhea Butcher eschew graphic descriptions of their bodies in order to focus attention on their conventional domestic and professional lives together. Instead of landing punchlines about menstruation, they are simply two comedians who happen to menstruate. Esposito certainly does not hesitate to use her period as comedy fodder in her stand-up, illustrated in a video of a live performance in 2015 that she shared on YouTube, “The Greatest Period Joke Of All Time #CHUNKS.” The stars of Take My Wife simply repackage their unruliness—in the case of Esposito and Butcher, their queerness—into a less attention-grabbing representation on their television series.

Couched within the formulaic narratives of the sitcom genre, the comedians situate their characters precariously within modern neoliberal multiculturalism. Their messages can be interpreted as subversive to societal norms, particularly by audiences—women and queer—that identify with the characters. For them, these stories and representations may prompt reflections on societal misogyny and bigotry, albeit without resolution. Rather than challenging social norms from the margins, these comedians stealthily center themselves on screen and in doing so, reposition their LGBTQ+ identities as conventional, further normalizing their subversiveness. This strategy is distinct from assimilationist storytelling, which tends to erase non-normative identities, and conventional post-feminist storytelling, which as Angela McRobbie describes, operates on the assumption that equality between the genders has been achieved. [2] The strategy described here does not make this assumption, nor does it portray women or gender non-conforming persons in opposition to cis maleness, which de-centers their intersectional identities. Instead, it centers their existence, relationships, and experiences within the text, framing them as “the norm” in order to then introduce new and original content related to their queer identities. 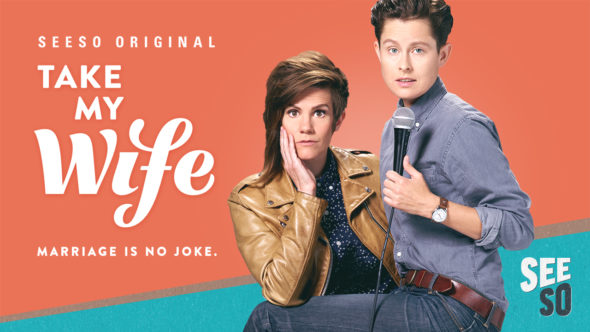 The tagline for the Seeso series, Take My Wife, is “Marriage is no joke”

The portrayal of Cameron and Rhea in Take My Wife is reminiscent of the charming awkwardness of another comedy predecessor, Ellen DeGeneres. DeGeneres’ comedy differs from that of her bawdy and bitchy peers of the ’90s; her inoffensive and “feel good persona” [3] helped make her character on Ellen (1994-1998) relatable and beloved by hetero- and homosexual audiences alike. There are many similarities between Esposito and Butcher’s performances and that of DeGeneres: both tell their stories using the traditional sitcom format, perform endearing portrayals of their on-screen characters, and attempt to frame their queerness as conventional. The television medium has changed since Barr’s and DeGeneres’ iconic series; it is no longer the monolithic network medium of thirty years ago. In this era of post-network niche audience targeting, why would the show’s creators be concerned with broadening the appeal of the characters in the series? 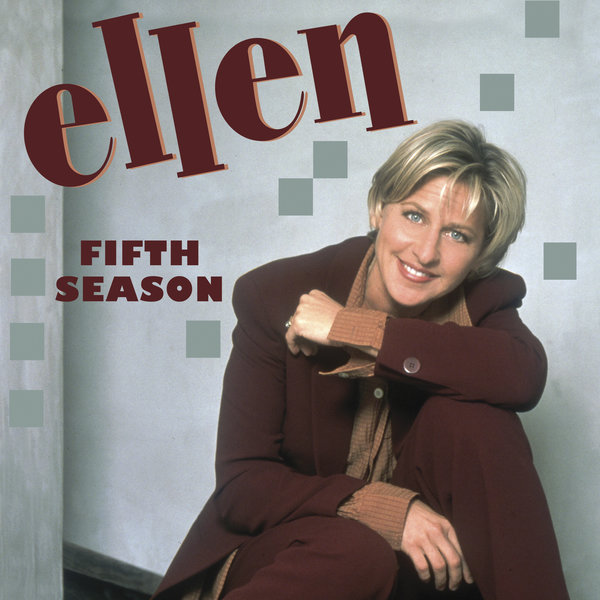 The ABC series, Ellen, ran for five seasons; it was canceled one year after its star came out on the show and in real life

Esposito and Butcher’s queer identities—both comedians identify as lesbians and Butcher as genderqueer—complicate the portrayal of their characters on television in a time in which half of the country elected a Vice President with a record of opposition to gay rights. It is not surprising that the LGBTQ+ creators and stars would explore more modest representations of their identities on a television sitcom as DeGeneres did twenty years earlier. For Esposito, framing her identity and critique of mainstream culture as lighthearted joking has been a necessary strategy from early in her career. She explains, “I’m tiny and smiley. I think a lot of it comes from creating safety for myself because as a queer person, I was just very unsafe. Then as a survivor, I feel really unsafe all the time. I think something that I did without knowing it was about introducing myself to people, to be like, ‘Please don’t kill me.’” [4] Esposito has intuitively attempted to make herself palatable to heterosexual audiences and recognizes how others like DeGeneres paved the way for her with a similar approach, “Ellen has to exist in people’s house during the daytime so that people aren’t so scared, and then I can get married. That has to happen.” [5]

Thus, in spite of the often subversive nature of their stand-up performances, Esposito and Butcher chose the traditional sitcom format to convey their stories on the television series. The two queer characters, Cameron and Rhea, are portrayed as conventional specifically through conformity with familiar aspects of the sitcom narrative, an emphasis on the couple’s domesticity, and the downplaying of their gender and sexual identities, a contrast with the more candid approach of their other media projects. This strategy positions the comedians as the non-normative leads of the television series, which allows the writers to introduce discourse from the point of view of its queer characters. The comedians then subtly address the struggles of gender non-conforming persons in our gender binary culture, assault and rape culture, as well as present novel, intimate, and authentic storylines for the show’s queer characters. In the second episode of the first season, for example, the comedians address the topic of sexual assault. The topic of rape is first raised indirectly as the comedians take to the stage to interrogate whether rape jokes are funny given the likelihood of sexual assault victims present in the audience. The following sequence in which individual characters in the show say “me too” to the camera is powerful, though, it should be noted a great deal more nuanced than Esposito’s recent #MeToo stand-up set in Rape Jokes (2018), “a blistering, masterful, tragic, hilarious hour of comedy about sexual assault and the culture that supports it” in which the comedian explicitly shares her personal story on stage. [6]

Rhea and Cameron joking about rape jokes on stage in the second episode, “Punchline,” of the first season of Take My Wife, 2016

Take My Wife should be celebrated for its authentic portrayals and for taking on the everyday aspects of lesbian existence after coming out, while acknowledging that it is also consistent with the marketing plans of a growing number of over-the-top platforms creating niche content that is geared toward distinct subsets of viewers. In this series, the show’s creators offer novel representations of real and intimate queer characters on screen to LGBTQ+ viewers, and more broadly, two inconspicuous lesbian characters, unthreatening to the heteronormative status quo. Gilbert has noted that female comics’ use of self-deprecatory humor can be interpreted as either subverting the status quo or affirming oppressive gender norms; likewise, in the case of Take My Wife, “it is up to the audience to interpret any form of cultural representation.” [7] This palatability of the series’ humor is not without potential drawbacks where the queer community is concerned; the tokenism of DeGeneres [8] and homo-normativity in many popular contemporary series with queer characters [9] are cautionary tales of the appeal of similar comedic approaches of series on broadcast networks. It is too early to know if the normalizing strategies described here will contribute to greater acceptance of LGBTQ+ persons and progressivism, either on- or off-screen, in the current post-network context.

1. Roseanne Barr and Sara Gilbert in the first season, episode 15, “Nightmare on Oak Street” of the ABC series Roseanne, 1989.
2. Comedians Amy Schumer, Ilana Glazer and Abbi Jacobson, and Samantha Bee on the cover of Entertainment Weekly (2015), Out (2016), and Variety (2016) magazines, respectively. (author’s screen grabs)
3. The tagline for the Seeso series, Take My Wife, is “Marriage is no joke.”
4. The ABC series, Ellen, ran for five seasons; it was canceled one year after its star came out on the show and in real life.
5. Rhea and Cameron joking about rape jokes on stage in the second episode, “Punchline,” of the first season of Take My Wife, 2016. (author’s screen grab)