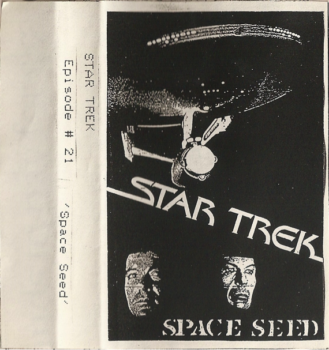 I am a fan of soundtrack albums. I like score albums, compilation albums, and albums that feature both score and popular music. I own, and enjoy, the soundtrack album for (at least) one film I have never seen. Some of my earliest and most powerful music-related memories involve soundtrack albums. To my pre-teen brain, the backseat of a 1981 Honda Civic wagon, especially at night when the only light came from the dashboard, could be almost anything. For example, James Horner’s Star Trek II soundtrack album could make it feel like the bridge of the Starship Enterprise. That cassette (and others) eventually became a series of squeaks. 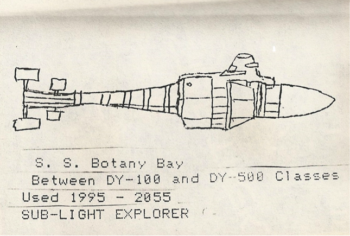 In my youth, I was also fortunate to witness the audio preservation of television. Much like those who created audio documents of Doctor Who episodes (whose work has now become the sonic spine for an animated episode), my brother Karl created his own version of Star Trek. My family did not own a VCR in the early 80s, and as children we did not have access to our own television, but we did have cassette players. Study of the TV schedule allowed decisions about which episodes to preserve. He placed a microphone in front of the TV speaker to transform (ephemeral) television into a (permanent) sonic Star Trek. Then he used a typewriter, a Xerox machine, a Star Trek: The Motion Picture poster, a library book and his terrific creativity to create artwork (above). This is a Star Trek he could control (and less scary than some official audio versions). This is a Star Trek that he co-authored. He did not do all this work for glory or profit. He did it all because he was a fan of Star Trek.

If we define a soundtrack album as one featuring at least 51% music [2] and with overtly signaled ties to another text (audio-visual or not), audio transfers of Star Trek and Doctor Who do not fit within these parameters. These recordings, like the programs they remediate, favor dialogue over music. They are transfers of a text’s complete audio contents. Importantly, they also follow an industrial practice, albeit a less common one, of releasing albums of the full sonic material from films, plays, and films based on plays. And here is the holy grail for some soundtrack fans: absolute sonic fidelity to the other “primary” text.

But even if we exclude my brother’s Star Trek from the category of soundtrack album, it does not mean it should be excluded from conversations about soundtrack albums. This text also highlights the fact that soundtrack albums remain under-examined in both fan studies and studies of audio piracy. 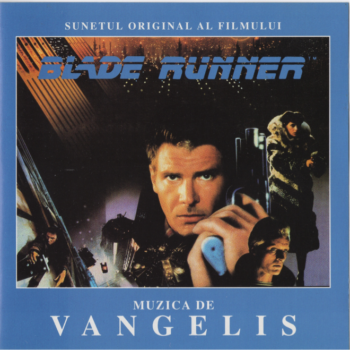 Probably not actually from Romania, and certainly not official

On the amateur side, soundtrack fandom pursues two frequently overlapping goals: 1) to create something that does not already exist, or 2) to “correct” the official release(s). The various albums associated with Blade Runner (1982) readily demonstrate both goals. Some facts: there are as many official soundtrack albums (three) as theatrically released versions of the film (three, not counting the “workprint”). But there are far more (official and unofficial) soundtrack albums than versions of this famously unstable text. Another installment of “spot the soundtrack (album)” on these albums could encompass far more than my allotted word count. But here is a greatly condensed account.

There have been Blade Runner soundtrack albums circulating since 1982. Though the film’s end credits promise a Polydor soundtrack album of Vangelis’s music, that album did not, and has never, appeared for reasons that remain murky. That year did include the first soundtrack bootleg (on cassette), and an official album of others playing the film’s music. The latter release, and the inclusion of some of the film’s music on a Vangelis compilation a few years later, did not nothing to stem the rapidly rising tide of unofficial releases. An official album of Vangelis’s film music belatedly arrived in 1994, featuring dialogue, sound effects and new music. It concludes with “Tears in Rain” rather than “End Titles.” This too, did not meet the needs of fans, who continued creating music-only albums like the one pictured above. [3]

The most famous, and best-loved, release is the two-disc “Esper Edition.” (it even has a “follow-up” release). More than one webpage features comments that purport to be from “(THE REAL) ESPER PRODUCTIONS.” The authors object to how the term has been used by others for profit, and emphatically state: “let us stress that our intention was always to make this a project by fans for fans. It was created out of love for Vangelis’ music‚ not money.” [4] The 2007 Blade Runner Trilogy is the most recent official release (other than subsequent re-issues). It includes the 1994 soundtrack album, another disc of music from the film, and a third disc of new music with vocal work from Edward James Olmos and Roman Polanski. On the second disc of “previously unreleased” material, Vangelis names a cue “Dr. Tyrell’s Death” that since 1982 fans have called “The Prodigal Son Brings Death.” The “official” name is unlikely to catch on. More importantly, despite the promise of “The ground-breaking soundtrack in its complete form” (see the sticker below), this release is not a complete offering of the music from (any version of) the film. [5] 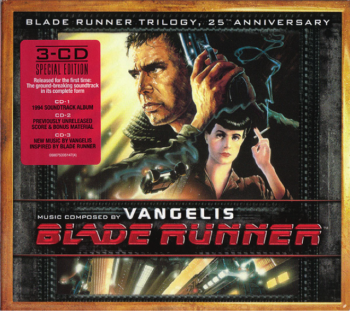 Three discs of official material. But still not the “complete form”

Blade Runner invites, and receives, devotion. Yet why does the scholarly literature on the film’s fandom have so little to say about the albums? [6] More generally, why do fan studies scholars—who surely access legal and illegal soundtrack albums—overlook them? Is the labor of creating Blade Runner bootlegs categorically different from the labor of fans in creating filk songs, vidding, or composing fiction? The “Esper” curators, and others, create (fake) record label names, song titles, album art, and choose not only what sonic and visual material to include but how to arrange that material. All of these decisions create meaning.

Soundtrack album creators often profess, and fans request, fidelity to the film or TV program. Clinton Heylin, in his history of bootleg recordings, argues that fans wanted “original film soundtracks on record,” rather than re-recordings of the music. [7] Providing the exact audio material from a film may not appear to offer a “creative transformation” in the same way as other forms of fan labor. And their work is often associated with a vacuum in the market. But note that bootleg soundtracks have circulated through the same channels as other fan productions: conventions, tape trading and file sharing systems. Fans have created pirate recordings for themselves and other fans.

Expanding our sense of film music, fans can also impact our sense of their labor. As Nancy Baym recently noted: “Nearly, if not all, musicians are fans. Many fans make music.” [8] To this I would add that composers are also fans. Elmer Bernstein is responsible for the first album of Bernard Herrmann’s rejected score for Hitchcock’s Torn Curtain (1966). Bernstein was a fan of his peer, and his Film Music Collection series (1974-79) created recordings of music he admired but was not readily (or legally) available. [9] In the following years, labels such as Varèse Sarabande and Intrada appeared in the U.S. market to help officially meet the desires of film music fans. These are small entities catering to a niche market, and take on the production risks that major media corporations deem unworthy of their time. 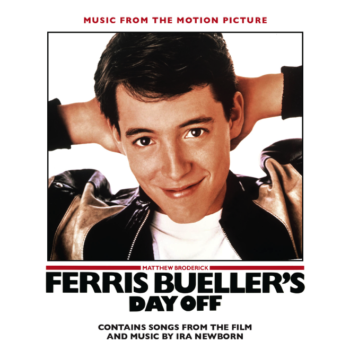 The Blade Runner releases are typically described as “score” albums, though nearly all include the 1930s pastiche “One More Kiss, Dear” (or the Ink Spots’ “If I Didn’t Care”). And while the soundtrack market favors score albums like those created by Bernstein, compilation albums are a staple of amateur production. Some, like Ferris Bueller’s Day Off, eventually become official releases. The La-La Land Records’ album pictured above was released in 2016, “following 30 years of cobbled-together mix-tapes, YouTube playlists, Japanese bootlegs, and awkward negotiations with Swiss synthpop musicians.” [10] Unlike most other John Hughes productions, the film never had an official soundtrack release, in part because the writer-director explained: “I just didn’t think anybody would like it.” [11] Hughes was wrong, as the numerous (never only Japanese) bootlegs demonstrated over the years (though these releases seldom include Newborn’s music). The film’s use of particular mixes of (somewhat) obscure songs created a welcome challenge for fans to create their own albums. The belated official release is, unsurprisingly, incomplete [12] and so keeps alive the conversation between industrial and amateur production. 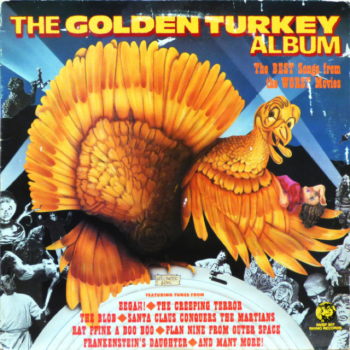 As long as films have featured music, audiences have enjoyed experiencing that music outside movie theatres. One music critic in 1986 wrote of soundtrack albums: “the record summons up once again the memorable scenes from the movie and sometimes even stirs the same emotions you felt in the theater.” [13] This remark opens a review of The Golden Turkey Album: The Best Songs from the Worst Movies, which, he argues, caters to the “bad-movie brigade,” an audience heretofore neglected by soundtrack releases. This same audience is one that scholars such as J. Hoberman and Jonathan Rosenbaum in Midnight Movies (1983) were already lauding for their active responses to films.

This “brigade” is a creative, and active, audience: individual fans and clusters of fans who talk about and sing along with films. A group including audience members, artists, musicians and composers. Fans who record television, create art, crate-dig (literally or virtually) for specific versions of songs, and curate albums. There is more to be understood about the intersections of fandom and soundtrack albums, whether operating legally or illegally, whether creating or sharing, whether copying or buying.