A Rose is A 장미 is A 장미 꽃: Translating Television Across Streaming Services Amanda Halprin / University of Texas at Austin 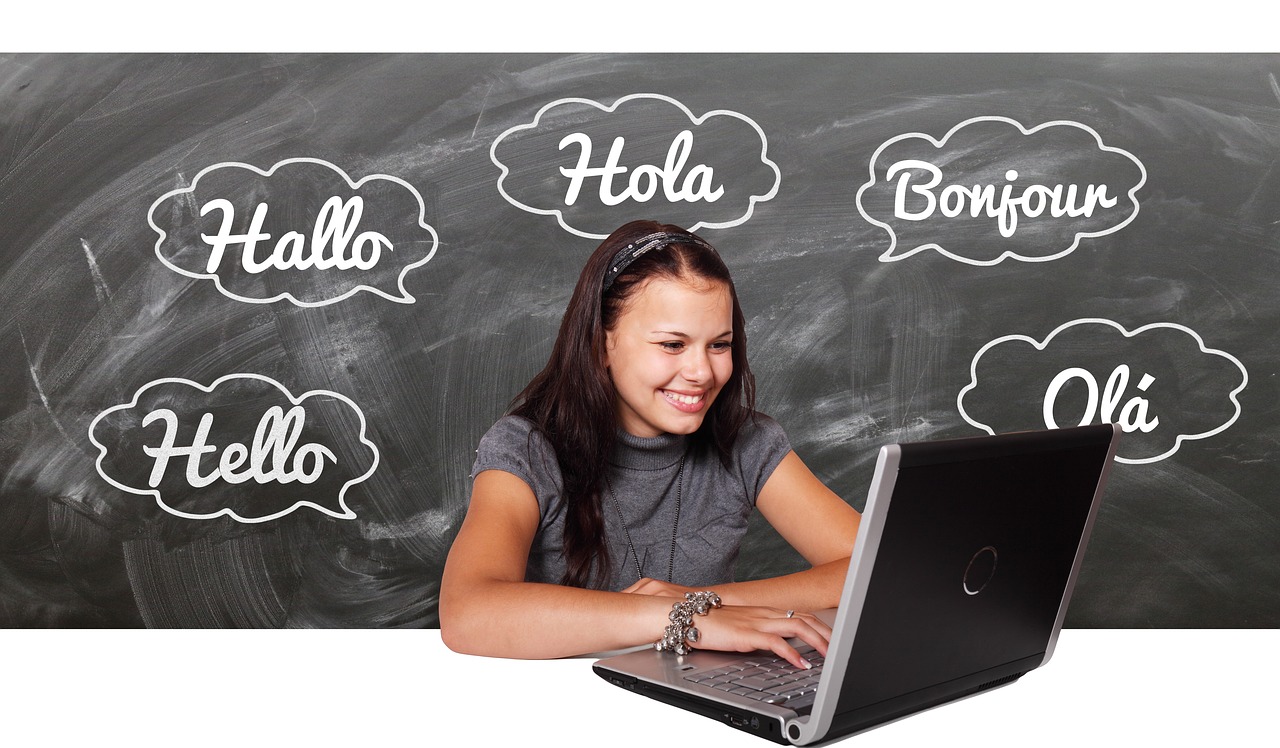 The Internet has allowed television to go global. Although foreign language content has been a part of American television for decades (e.g., Telenovelas), almost all content aired on American television is in English. As Netflix and other streaming services grow their portfolios and reach, programs in a wider variety of languages are becoming accessible to US audiences. However, the content of these programs varies from service to service, even when the programs themselves are the same, as different services provide different translations. To demonstrate how these services can translate the same content into different phrases, let’s look at 응답하라 1997, a Korean drama available on Netflix, DramaFever, and Viki.

There is already a linguistic difference before you press play. Netflix and Viki translate “응답하라 1997 ” as “Reply 1997,” while DramaFever translates the title as “Answer Me 1997.” Although both of these titles convey the same general message, “reply” and “answer me” have different connotations, the most obvious being the figure and lack of figure. “Answer me” presents a specific person to the audience: there is a “me” asking for an answer. With “reply,” the speaker is less concrete. A viewer presented with the “answer me” translation might expect the show to have one main protagonist, while a viewer presented with the “reply” translation might not have this same expectation.

The difference in translations is also significant on a more superficial level. Titles are a key component in both drawing in audiences and pushing them away. Although there isn’t a distinct correlation between bad show titles and cancellation rates (as “bad” titles are subjective), bad titles are often cited as one of the contributing factors for low ratings that lead to cancellations (see: Trophy Wife, Don’t Trust the B—- In Apartment 23, etc.). While most English speakers do not have a strong reaction to the words “reply” or “answer” there are some cases where one translation of a word would be preferable over another translation. For example, many people have an aversion to the word “moist.” According to a study published in PLOS One, as many as 20% of American English speakers find the word displeasing.[1 ] So, when describing something as “slight or moderately wet,” it’s probably best to choose “damp” over “moist” because “damp” has fewer negative associations. Although the words have the same meaning, viewers process them differently. 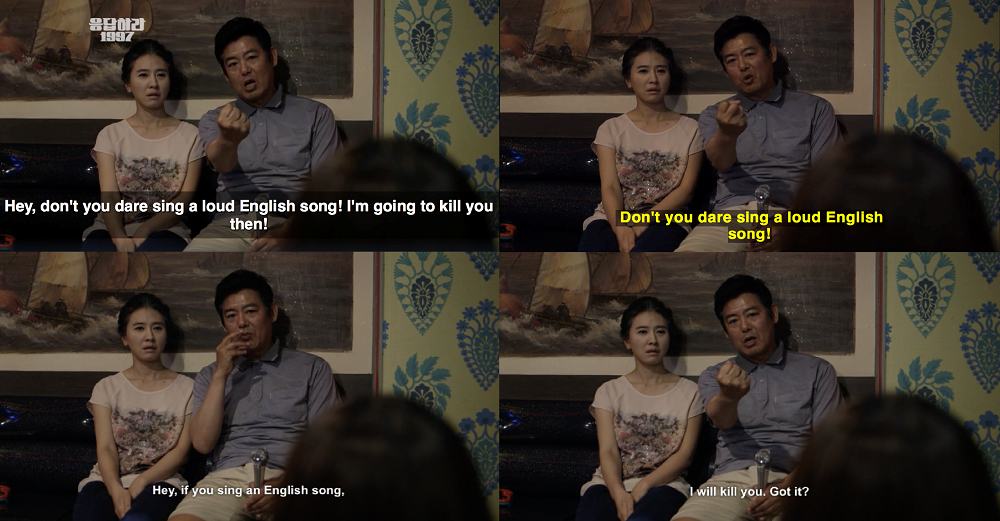 The way viewers process subtitles also affect how they process content. The pictures above all capture the same line of dialogue, found one minute and nine seconds into Reply/Answer Me 1997 ‘s first episode. In this scene, a man (Sung Dong-il), his wife (Lee Il-hwa), and their daughter (Sung Shi-won) are performing karaoke in a singing room. Their time is almost up, so Shi-won decides she wants to sing a song. In the pictured line, her father tells her not to pick a song with English lyrics, as he doesn’t care for them. While Viki and DramaFever fit the whole line into one frame, Neflix splits it into two frames. Putting fewer words on the screen allows viewers to process other visual information in this image, such as the actor’s facial expressions, as opposed to just focusing on the subtitles. DramaFever’s subtitles take the same consideration into account. However, instead of splitting the line into two frames they condensed the content contained in the line. DramaFever’s version cuts out Dong-il grabbing Shi-won’s attention by yelling “Hey!” and removes his threat to “kill her” if she picks an English song. Removing these two components changes how the viewer is first introduced to Dong-il’s personality: “Hey” shows the casual nature of Dong-il and Shi-won’s relationship, while “I’ll kill you” (which, it should be noted, is not a literal threat) demonstrates the combative nature of their banter. Both Viki and DramaFever drop the question contained in the line, which again stresses the casual yet combative nature of Dong-il and Shi-won’s banter, while Netflix drops the descriptor “loud” from “English song,” slightly changing the context of their argument. Viki and DramaFever’s use of “loud” is meant to explain that Dong-il doesn’t want to hear an annoying song, while Netflix’s translation could be interpreted by a viewer as Dong-il having an aversion to all English-language songs. All three of these translations are valid.

There is no one “correct” method of translation. The chart above demonstrates different methods of translation divided into two categories: methods that prioritize the initial content of the source language (SL) and methods that prioritize reception of an utterance once it is translated into the target language (TL). The methods of translation chosen depend entirely on the translator’s preference and objectives. Netflix, Viki, and DramaFever have different positions on the translation process. Netflix built on its background of algorithmic matching to develop HERMES, a translator test and indexing system described as “emblematic of Hollywood meets Silicon Valley at Netflix.”[2 ] Potential translators take the HERMES test and are assigned an identifying “H-number,” which Netflix uses to monitor the number of translators working on any given language and to figure out which translators should be assigned to which genres. The system’s ultimate goal is to “use [HERMES’] metrics in concert with other innovations to ‘recommend’ the best translator for specific work based on their past performance to Netflix,” similar to how Netflix recommends specific content to its users.[3 ] Viki’s call for translators emphasizes the fan communities around the shows being translated. Instead of making translation seem like an isolated activity, Viki advertises it as a way for translators to “make new friends” and “meet people from around the world.” They invite those interested in translating to submit language self-evaluations; in addition, potential translators can directly message a “channel manager” (the person who oversees the translation team for a particular program) if they want to write subtitles for a specific show. Viki’s translation teams also include editors, who review the subtitles, moderators, who manage the translators and editors, and segmenters, who cut the videos into segments to prepare them for translation, in addition to the aforementioned channel managers and translators. As with the translators, anyone with access to Viki’s site is able to apply for these positions. DramaFever’s approach to translation is less overt than the other two approaches. In 2014, the site posed an article encouraging users to sign up for WeSubtitle, a “subtitling community” where users could get paid to translate DramaFever’s shows based on factors such as translation ability and schedule availability. However, the website is not taking on new translators as it is currently “at capacity.” DramaFever has not put out a call for translators since 2014. Furthermore, DramaFever’s current advertising strategy emphasizes that its subtitles are written by “professionals.” 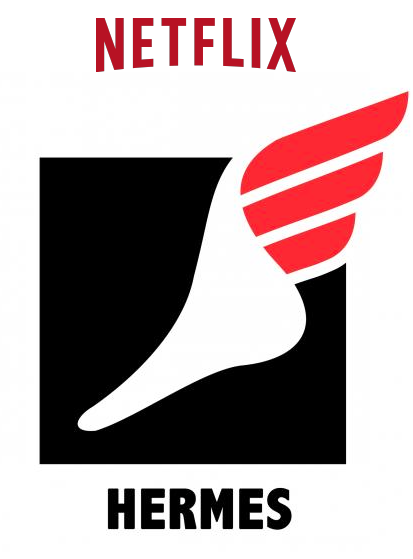 Although advertising its translators is not part of Netflix’s marketing strategy, this is a major component of both Viki and DramaFever’s strategies. As previously mentioned, Viki positions its subtitles as written for fans by fans, presenting the website as a community where fans can bond over the same content, regardless of language barriers. Viewership communities are also a component of DramaFever’s overall experience, but its subtitles are presented as a separate element, created for fans by professionals. However subtle these differences and their outcomes may seem, these factors push users to choose one service over another. While rose is a rose is a rose, if you asked Google Translate, a rose is a 장미 is a 장미 꽃. The medium may be the message, but so is the messenger.