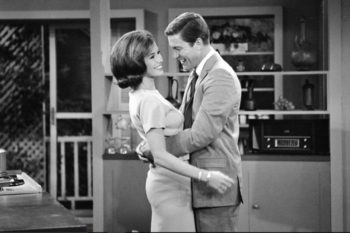 We might as well start where so many episodes of The Dick Van Dyke Show (CBS, 1961-1966) do: with our goofy hero, Rob Petrie (Van Dyke), tripping over the ottoman in his living room. In this incarnation of the show’s opening credits, the supporting cast—wife Laura and son Richie (played by Mary Tyler Moore and Larry Mathews) and co-workers Buddy and Sally (Morey Amsterdam and Rose Marie)—rushes to help a laughing Rob to his feet. This sequence encapsulates the premise of the show, namely the intertwining of work and home for a television writer not unlike the show’s creator, Carl Reiner. As David Marc notes in his book Comic Visions, the divide between home and work in The Dick Van Dyke Show is negotiable, not unlike its sitcom precursor, I Love Lucy (CBS, 1951-1957), in which Ricky might break into song in their New York apartment or where Lucy reveals her pregnancy during a show at the Tropicana. [1] 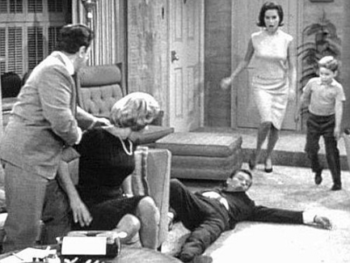 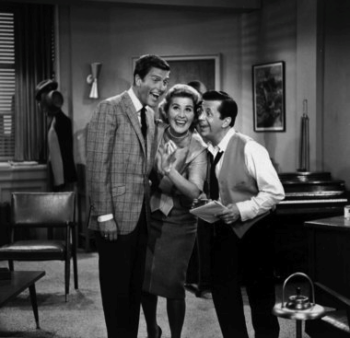 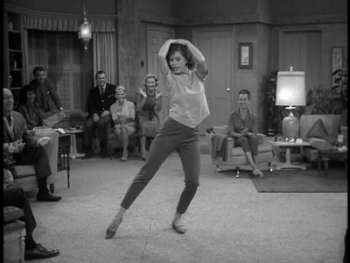 Carl Reiner recently said of Moore: “She was grace personified. She could never take a wrong step…. The fact that she started out as a dancer was indicative of everything she did after that. Her grace was unmistakable. I saw it the first time she walked into my office.” [2] That Moore’s character, Laura, is a retired dancer factors into a series of storylines, including Season 1’s “To Tell Or Not To Tell.” In this episode, the Petries host a party at which, after comedy performances from Buddy, Sally, and Rob, the crowd clamors for Laura to dance. At first, she pretends to demur, saying “oh no…,” but before the people around her can respond, strikes a pose and launches into a boldly mod and seemingly improvised routine: apparently, Laura is no shrinking violet. She proceeds to fill in for a missing dancer at The Alan Brady Show, throwing her household into comparative—read: sitcom—chaos. Rob worries that, now that his wife has returned to her old stomping grounds (so to speak), she won’t want to return to being a wife and mother. The television gods swoop in and nullify this potential problem: while Laura is invited to stay on the show permanently, she is flattered but disinterested in returning to the stage full-time. Thus, the show has its cake and eats it too. Laura could be a dancer, but doesn’t want to, while the begrudgingly egalitarian Rob is rewarded with a contented stay-at-home wife. The Season 3 episode “My Part-Time Wife” has a similar plot, in which Laura serves as a typist in Rob’s writers’ room. Rob, threatened by her talents and seeming ability to balance her home and work responsibilities, is shocked to discover by episode’s end that Laura is exhausted and eager to return to the role of happy homemaker. 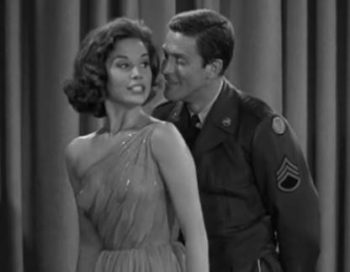 No, of course not. Yet, again, we see how Laura the housewife incorporates performance and whimsy into her daily life, this example being fairly innocent foreplay; as Robert David Sullivan writes for The A.V. Club, this interaction “implie[s] that Laura likes a little role-playing to spice up the Petries’ sex life.” [3] Stephen Bowie of Vulture points out the episode’s “big” reveal: Laura gets off the phone after a seductive conversation with the fairly forward “Dr. Bonnelli” and turns to visiting neighbor Millie. “Who was that?” Millie asks. “Rob,” Laura chirps, returning to the Girl-Next-Door we never really feared she wasn’t… did we? “It is one of Moore’s most delicious line readings,” Bowie justly declares. The episode ends with her accidentally propositioning a real wrong number, believing it to once again be Rob. When Laura discovers her mistake, she is suitably mortified, while Rob is amused and attracted, the scene ending on a long and suggestive smooch. Laura may not perform for pay anymore, but what her character and storylines reveal is the home as a site of play, fun, and style, and who better than Mary Tyler Moore to teach this lesson? 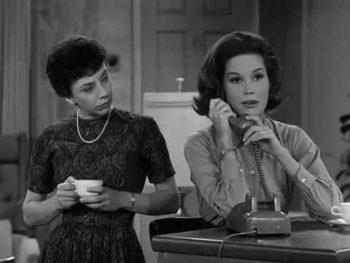